This post will give you all you need to get started storyboarding for your animated projects. We'll talk about:

Over a decade ago, my friends and I created a silly animated parody series called Zarbon's Masterpiece Theater. We're now back working on a new animated parody series, Dragon Mall Quest. This is the first blog post in a series that will share what we've learned along the way as well as give you a behind the scenes look at how Dragon Mall Quest is made. 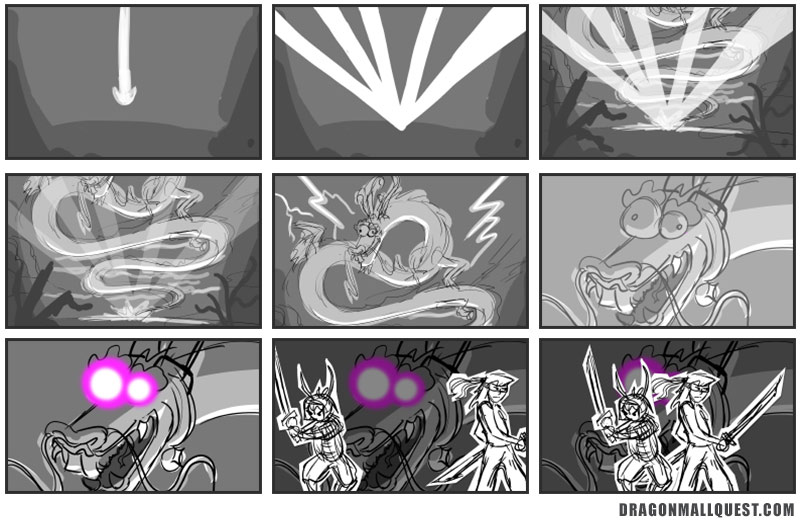 Storyboards for the opening sequence of Dragon Mall Quest. Shenshort the goofy dragon with phenomenal cosmic powers appears in rays of light with thunder and lightening. Then the two main characters dressed as warriors slide into view.

Storyboards are a shot by shot representation of your script. It conveys:

Why we think they're useful

Until Vulcan mind melds become a thing, it can be hard to convey pictures in your head to others. Throughout my career I've learned the hard way that as brilliant as my creative ideas may be, most wont understand those ideas by me simply describing them. People need visuals to get it.

Animation is tedious and time consuming -- in other words expensive. Storyboarding is a cheap and fast way to see if your scene is actually working before investing time in final animation. Sometimes our scenes sounded great in the script, but once we start to see the storyboards, we realized it was a turd sandwich. If we had skipped the storyboarding step and gone straight to the animation, then we might feel compelled to keep our turd sandwich in the final cut just because we already worked so damn hard on it or spent so much money on it.

There's a better way. We storyboarded our scenes first and iterated multiple times until it felt right. Then we went into the final animation phase.

"I will never let something go into production unless it is working fantastic in that version with the still drawings. Because no matter all the great animation you can do will never save a bad story." -- John Lasseter, Chief Creative Officer of Pixar Animation Studios. [1]

Storyboards serve as a guide for animators

We've worked with multiple animators to bring Dragon Mall Quest to life. The more information they're given, the faster and easier it is for them to deliver. Storyboards are like a rough draft for key frames of the animation. 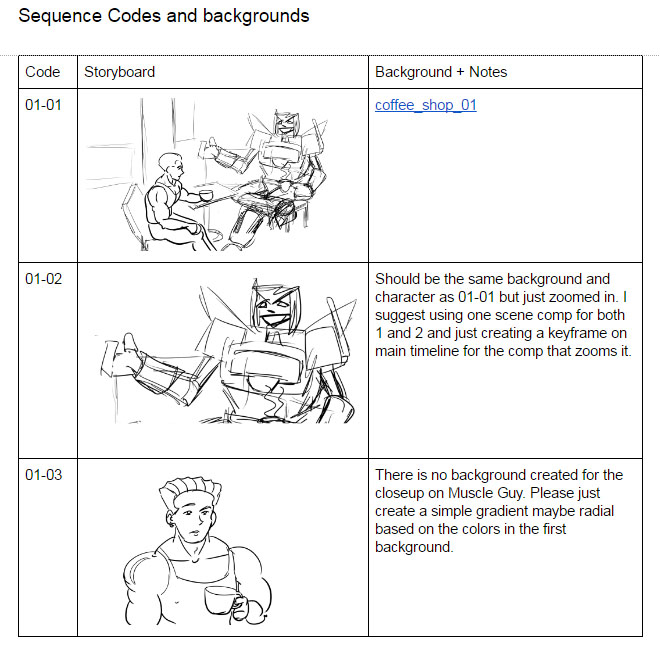 Here's what a typical brief might look like that we'd give an animator. It includes a storyboard for each camera shot along with notes about the layout, which background assets to use, etc. We'd also share the animatic with the animators which gives them a better sense of what's going on. We'll talk more about animatics in part 2.

Storyboards helped us to see settings, characters, props needed for a scene and estimate the workload and cost. There have been times that we think a scene will be simple and then once it's storyboarded, it turns out to be more complex. This gives us a chance to either make changes to the script to simplify, or budget appropriately.

Here are a few things we learned about making storyboards.

Storyboards are meant to be disposable. So I tried not to get too attached to them by getting into the details. I drew simplified caricatures. Roger and Leo had distinct and simple enough hair styles that it was quick to draw them. Note how crude and simple my drawings look.

Roger has the two little hair bits at the top back of his head. Leo has long hair and his eyes are typically indicated by straight lines, which seemed appropriate for his apathetic personality.

Traditionally, you'd indicate camera movements in storyboards with arrows and boxes. In our case, we rarely had camera movements, and when we did, I would indicate them by drawing additional boards or animating their movement in a video. This will start to make sense when you see the animatics we produced.

Here we've indicated the camera panning up to reveal a fighter character with hair so long it drags on the floor.

I've found this is the majority of the decision making process of creating storyboards. I'm figuring out what's the best location for the camera to convey a particular moment. I don't typically get too creative. I stick to very basic and simple shots that are both cheap to produce and feel appropriate for the moment.

Here's an example of an establishing shot (the first shot in a scene which sets the location/setting). It's a bake sale and a character in the foreground walks by. We can see from his expression that he's not feeling so well. As he exits the view of the camera, another character doubled over is vomiting (ew… sorry I never said Dragon Mall Quest would be a sophisticated animated series, did I?). Then the camera switches to a more zoomed in shot where the two main characters Roger and Leo have a dialog. Roger looks concerned. Perhaps it's because they hosted a bake sale that got everyone sick.

For dramatic moments, I would try more interesting compositions. 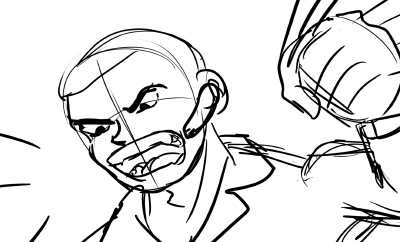 The main villain is about to punch someone. Since this is a more dramatic moment, I used an angled camera position. What's that thing on his ear, you ask? It's a bluetooth earpiece of course! What villain would be complete without one?

Add shading and lighting only when necessary

The vast majority of the storyboards for Dragon Mall Quest were simple black ink drawings on white. I avoided shading and lighting wherever possible because it's time consuming and in most cases I didn't need it.

But there were occasions when shading made the scene clearer or the lighting was important to the story. I stuck to simple grey scale and only used color when absolutely necessary.

Here's an example. The character Ted (who is a tentacle monster), is watching a film alone in a movie theater. The film happens to get him very excited. So naturally, his tentacles begin to appear. Then a guard notices him and shines his light on him.

Indicating the flashlight and the darkened movie theater seemed necessary to convey the setting and props (flashlight), so I tossed in some grey tones. 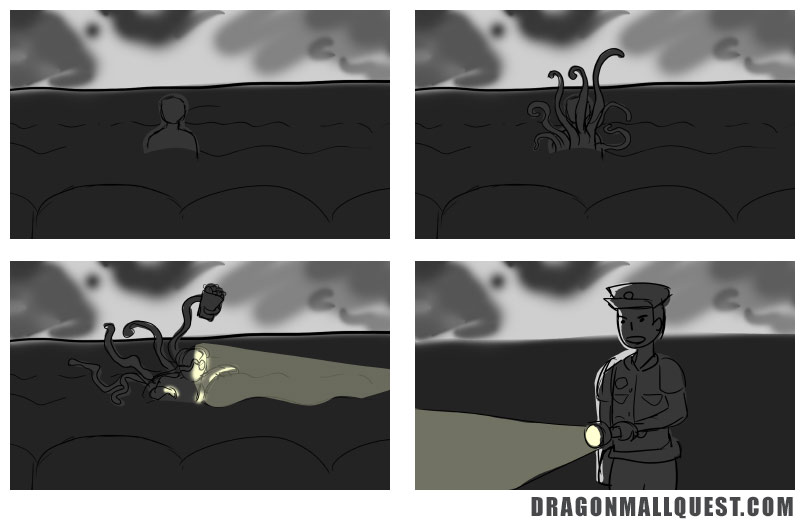 There are also times when I'd add a grey background and add a white fill for the characters to indicate foreground and background (like the bake sale example above).

There's more to this story (haha get it?) so don't touch that dial. Continue on to part 2 which covers:

Finding Triton A child vanishes, leaving his birth parents to wonder. Twelve years later, when five teenaged...
The Way She Loves The way that she loves me, / Is far beyond compare,...