Children of the Moon

Home » Comics » Children of the Moon 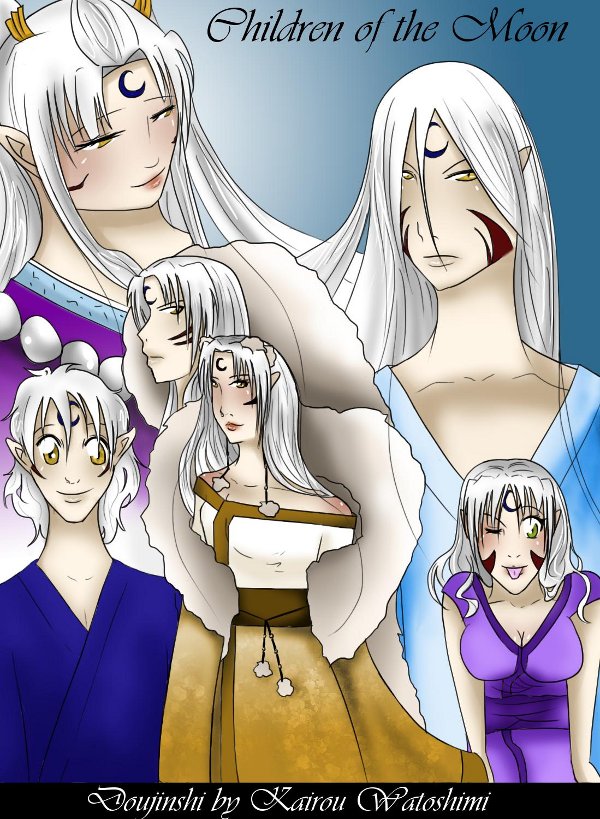 Being born in a royal family, it is no surprise that the male members of the family have to fight each other for their rightful place in the throne. Three brothers, Sesshomaru, Ryu and Toya found themselves fated to fight and kill each other since the day they were born.

If the family tension between the brothers weren't high enough, Shikori, one of the sisters, having fallen in love with Ryu, would stop at nothing to make sure he wins, even if it means breaking the rules and killing her two other brothers herself.

In case you didn't get it from the summary, this doujinshi is not going to be a happy romantic type of doujinshi even though this is a Sesshomaru and original character doujinshi.

Anyway, allow me to introduce to you the characters... Top left would be Sesshomaru's canon mother. Yes, it is her canon design... The guy in the light blue would be Ryu, the oldest of the siblings. Second oldest would be the girl in the purple, her name is Azura. After that Sesshomaru is the third oldest... he's behind Shikori, the girl in the gold... I hope he looks like himself. Shikori is the second youngest. Toya, the guy in the dark blue is the youngest.

All the siblings are born on the exact same day... since Sesshomaru is a dog, I thought it would be fitting if he was born in a litter of puppies... So they're like twins... only with five people.... what's that called?

** Despite being in the Red Curtain, Children of the Moon only has some limited nudity, swearing, gore, and whatnot. It is here just in case.