Sesshoumaru has become frustrated with Inuyasha. The hanyou's constant abandonment and harsh words toward Kagome have worn down his nerves and resolve. What happens when he finally decides to take action? 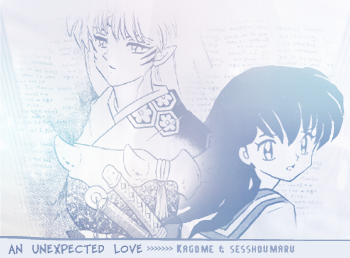 Author Notes: The original idea I was playing with was voyeurism, so be warned that I plan on attempting to write sexual situations. This work will also include lots of violence and blood. As well as some unresolved tension between some of the characters; sexual and violent tension. I’m also including torture and humiliation which leads to angst. ^^ Ha ha ha. You all think I’m crazy now.  But be warned that this will not be safe reading material for anyone under the age of 18.  This will be the only warning that you will get.  I don’t really have a summary as I don’t know where this is going.

Chapter One : Inuyasha or Sesshoumaru?

Inuyasha had left again. Kagome had lost track of how many times the hanyou had sought out Kikyou, but now it seemed she suffered even more humiliation. The distant promises that Inuyasha had made faded away like the strength of his love for her. She excused herself when Inuyasha had not shown for dinner. The inner circle had known that something was awry. Tension was thick in the air. A clueless Rin watched as Kagome disappeared into the forest. Her concerned gaze turned to her savior.

“Eat Rin,” Sesshoumaru instructed as he mapped the direction the miko had disappeared to. He knew that Inuyasha had traveled the opposite way and that she would be unguarded.

Everyone’s gazed returned to the flames. Several moments passed before Lord Sesshoumaru stood and departed the camp, heading south of Kagome’s trail. Rin’s concerns were not unfounded. The child knew the dangers of being alone, even if Kagome were a well-trained priestess, safety was in numbers. Therefore, Sesshoumaru could not ignore her silent plea but he did not want the others to have knowledge of his whereabouts. Inuyasha was sure to return shortly.

The demon moved swiftly, cutting across the terrain until he could smell her near. He closed the gap as he spoke. “What is wrong?”

The woman jumped at the sound of his voice. She quickly dried her face and turned to meet him. “Sesshoumaru-sama, wh...what are you doing out here?” His gaze told her not to skip around his question. “Nothing, I’m fine Sesshoumaru-sama.”

“Does it upset you that much when Inuyasha runs to his dead wench?”

Kagome was stunned and her guard shattered. Tears sprang to life before she could banish them. “I’m sorry to bother you Sesshoumaru-sama,” she cried as she turned quickly, intent to leaving.

The demon was at her side in a flash. He grabbed her hand, stopping her from moving further away. “Does it upset you that much when Inuyasha...”

He began repeating his question before she screamed her answer. “Yes! Yes...”

She only had time for a short answer before Sesshoumaru’s face filled her vision. “Then I will release you from your misery.” Kagome briefly had thoughts of her death before he crushed her under a submissive kiss. The young woman folded, unable to fend off his expert attack.

His tongue and lavender scent overwhelmed all of Kagome’s senses, she had become numb. The woman could feel him probe deeper, demanding she relinquish herself immediately. The feel of his fangs as it scraped along her lips, and then the taste of blood broke her in two.

She struggled slightly under his hold, grasping at her miko powers, her hands but a slight pressure against his chest. When he released her she gasped for air as he encircled her in his arms. “Sesshoumaru-sama what is wrong with you?” Her voice pleaded with him, unable to right herself after the assault.

“I can not stand by and watch as Inuyasha ruins that name of the Inu-clan. Even if he is a half demon, he is still not above the laws.”

His statement confused the girl even more. “Laws? What do you mean?”

“I will not tarnish your reputation either Kagome. I know that you are still pure and we shall follow the courts mating ceremony to perfection.” She blushed under his statement. “I am sure that you will make a fine wife and mother, especially to Rin.”

“Wha...What? Sesshoumaru, have you been hit over the head? I did not know that your distaste for humans was a facade.” She continued to try to unwind herself from him, grasping at any straw she could get.

“Be still.” His tone of voice froze her. “You can not fool me Kagome. I will give you a choice if that is what you wish. Either agree to mate with me or I shall resolve Inuyasha’s predicament myself.”

Kagome swallowed hard. Her mind went blank; all the questions were lost. ‘What had happened to make him change his mind about humans?’ She was in an uncomfortable spot.  Sesshoumaru carried out his threats and he had made Inuyasha’s punishment clear enough.  But could she have feelings for Inuyasha’s older brother? “Sesshoumaru-sama, even if I were to accept your proposal I do not think that I could love you. My heart belongs to Inu...”

He silenced her again, bringing a hand to her mouth. “How can you love someone who has none for you? I will not lie, humans are filthy creatures, but I am fond of you and Rin seems much happier when you are around. It pains her to see what Inuyasha does.  She asks me why you are sad all the time, and I do not know an answer.  I do not understand what you humans think when it comes to these emotions but you are heading down a dangerous path. Your friends see it yet you do not. I will save you from your fate, for Rin.”

Her question was only a whisper and she did not meet his eyes when she spoke. Yet, Sesshoumaru had not thought beyond his words. Of course, the woman would have asked that question. She was not the stupid kind. Sesshoumaru was also not one for lying but his brother’s scent had caught his nose and the demon prince knew he would be near-by. They would be found too soon. Inuyasha did not deserve anything that was handed to him; Tessaiga or Kagome. After all, Inuyasha had run off to his dead priestess and left the live one unprotected. Foolish.

He was merely doing him a favor, he grinned inwardly. ‘Yes, that is it,’ he reasoned with himself. What would his brother do? “You are a beautiful creature, even if you are human,” his words were soft. He stroked her face, and she fell under his will. “I can love you the only way I know how. That is more than my brother can offer.” He knew Inuyasha could hear their words.

“Sesshoumaru... I do not know how to answer...” she began only to stop. Kagome was very confused. The lord was very appealing. She had to admit that she had thought about him once or twice but what about Inuyasha?

His declaration stunned the miko. His words seemed so real and yet they had come from no where. ‘Those were Inuyasha’s words....yet...’ she sighed slightly. Inuyasha was not the one in front of her... He was not the one who had saved her. He was not the one that was there for her. Her vision was spinning and she could barely think straight.

Sesshoumaru felt Inuyasha near and could smell his boiling anger. He knew the hanyou had been watching. The time for waiting was over. “Give me your answer now, Kagome.”

His words were true. Sesshoumaru had not let her down and if Inuyasha’s brother had not been there she would have died, not once but twice. Kagome owed Sesshoumaru her life. “Yes, but.....there is something I want to do first.” He nodded for her to continue. “I want to return home. I want to say goodbye to my mother.”

The demon lord nodded, agreeing to her terms as she had to his. Their marriage contract was sealed. Inuyasha could never lay a hand on her again. He bent and placed a soft, gentle kiss on her lips. Sesshoumaru knew that his brother was rusty on the mating rituals of the nobles but he was smart enough to know what their bargain had meant. She belonged to him now. He felt his brother disappear under the brush, and knew that Kagome had been unaware to his presence.

He would be forced to leave the group tomorrow with his pack in tow. It was important to quickly break the bond between Kagome and Inuyasha. He needed to secure Kagome and have her settle in at the castle. She would have to learn to customs of the youkai court and begin dressing more appropriately. He knew that he would be ridiculed for taking a human wife, especially his first, and for walking in his father’s footsteps, but there were benefits. She was a powerful miko and held the Shikon no Tama. Those were two things that would keep the royal court youkai under his thumb.

Well, I just left all kinds of questions unanswered. ^^ I just started jotting down this lemony idea I had about voyeurism (@ two in the morning) and then my sick and twisted mind got a hold of it....and then it turned into this and well, tell me what you think. T_T;  I really have no idea where this will go but I want to have fun with it.   Special thanks goes to Marcia.

Out In The Open Klavier and Phoenix do Apollo up- down- and sideways, Miles watches.
becouse it never really mattered Just to get this strait... I'm not a masochist, nor am I suicidal. And I've never been to...