Devil May Cry fic featuring Dante & Vergil as well as a few characters made up by me. Story revolves around Dante who is trying to understand just how he feels about his brother. A new client distracts him, but how will Vergil react? 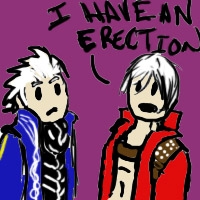 Another Perspective This is the fourth story in "The Lakeville Chronicles". The first four stories do not...
Different After the defeat of Buu, our favorite couple--Bulma and Vegeta--have some catching up to do.