Out In The Open - Chapter 1

Out In The Open

Klavier and Phoenix do Apollo up- down- and sideways, Miles watches.

Chapter 1, Out In The Open 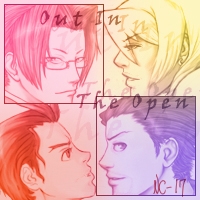 Out in the Open: Chapter One

“…You’ve got to be kidding me…” The pause preceding that statement had been so long that the prosecutor had been wondering whether the man on the other end of the line had not simply terminated their telephone call in shock.

“He actually said all that?” Disbelief still dominates all other emotions in the attorney’s voice, obvious even over the slightly distorted cellular signal, but Klavier is amused to notice also, an encouraging sort of bemused embarrassment in his tone.

“Yes, well… He… admired you for years before meeting you… Your law career inspired his own… It is not so unusual for one to have fantasies of those one… idolizes…” Klavier chuckles, leaning back in his chair with the phone cradled between his ear and shoulder as another long thoughtful pause ensues.

“…And you’re ok with this?” This time the man’s voice is timid, sounding almost frightened of receiving an answer.

“As I said, it is completely natural hmm?” Klavier purrs, putting as much reassurance into the tone of his voice as possible.

“No, uh.. not about the fantasy itself… about.. ah… ” The defense attorney’s voice falters, his discomfiture palpable even over the crackly telephone connection.

“About actually doing it, ja?” Klavier lowers his voice conspiratorially, sitting forward again. “I would never have contacted you to discuss it, otherwise…” He lets this hang, blinking at his computer screen placidly for the duration of another pregnant pause.

That smirk expands into a grin- “Ja, Herr Wright.” He twirls a pen between thumb and forefinger, relaxing again with an amused sigh. “At the same time…”

“I just can’t believe that Apollo would…” Klavier can nearly hear Phoenix shaking his head in disbelief. “…He’s… usually so… reserved… How did you even find out about this… fantasy?”

“Herr Wright, do you recall how it was that Herr Forehead and I… ahh… became involved, initially?”

“Then you know that our dear Apollo becomes extremely forthright when he has… overindulged ja?” Klavier’s question is answered by silence. “Herr Wright?” Klavier intones carefully after a protracted moment, breaking the longest stretch of dead air yet.

“I swear to God, Gavin… if you’re fucking with me…” The voice over the line is lowered but any venom in it is diluted and weak. If anything, he sounds defeated… defeated, yet still intrigued.

“Herr Wright, I am completely serious about this… Forehead, he-” Klavier’s short bark of laughter crackles in his own ear. “He was very… specific.”

“…And what about you, Klavier?” The defense attorney’s voice rushes out in a nervous sigh as he speaks and his use of his first name doesn’t go unnoticed by the prosecutor.

“Me?” Klavier ventures, already fairly certain where this is going.

“Yes, you… I mean we’ve established what Apollo wants, ideally… Is this something you want as well?” There is an audible swallowing sound before the man finds words to continue. “I… uh.. I hadn’t imagined you’d even consider me… like that…”

“Herr Wright…Phoenix…” Klavier purrs the attorney’s given name in a satin tone. “You are not an unattractive man… You’re intelligent and physically fit, and I now know that you are a good person… a friend… If you can look past the negatives in our history then I certainly can also, ja?” He waits, chewing the end of his pen.

“No weirdness Phoenix, I promise… He- We… just want to try it… Just for fun ja?”

The static silence echoes in Klavier’s ear for an almost unbearably long moment, and then, nearly in a whisper…

“…I have to talk to Miles about this…”

The prosecutor grins victoriously. “Of course, I had assumed you would need time to consult with Herr Edgeworth… Please, let me know when you have an answer but do not mention to Apollo that I spoke with you about this, alright?”

“As if I would even know how to approach the subject…” Klavier is relieved to identify humor in the man’s voice as he is bidden good day with a snort of laughter.

Smiling, Klavier thumbs the disconnect button and relaxes back once again, pulling on his lower lip in thought. Slowly he rotates to face his companion, smirking as he notes that even though the man’s face is completely hidden, being buried in his hands currently, Klavier can still see the bright blush as his visible ears radiate heat and his perpetual antennae-like hair spikes quiver spastically.

“…I can’t… believe… I just let you do that…” Hushed but clear, Apollo’s voice squeezes out between his palms as the attorney remains hunched in Klavier’s visitor chair, gripping his own face as if about to tear it off in embarrassment.

“Ahh, Forehead… It is healthy to get these sorts of things out in the open ja?” Rising to his feet, Klavier crosses the office to drape himself over the back of Apollo’s chair, massaging his tightly drawn shoulders.

“Herr Wright is not your boss… You are a partner, Apollo. Your name is on the sign ja?” The prosecutor soothes, still rubbing his thumbs into the base of Apollo’s neck.

“That’s not the point...” The seated man sighs and straightens up, releasing his death-grip on his flushed face. Klavier is amused to note that there are indeed visible indentations on his broad forehead. “Klavier… I- I should really be getting back- ah!” The young attorney’s breath catches, as Klavier leans in to nuzzle beneath his ear, pressing his mouth wetly there and then against his jaw, scraping it with his teeth lightly to feel Apollo’s shudder.

“You must act as if everything is completely normal when you see him, you know…” Purring lowly into Apollo’s ear, he mouths the lobe, smirking as the attorney arches and gasps but does not protest. “But now you will not be alone, ja? He will have to act as well… Have to look at you and know… exactly how you want him… want us to touch you…”

Now it’s the prosecutor’s turn to shudder. That voice, murmuring his name, just never failed to make Klavier wish to hear more… to hear that voice moaning his name… gasping it- shouting it.

“Mm, that’s right… your Klavier, ja?” He hums against Apollo’s flushed neck before pulling away to circle around in front of the chair and kneel between his spread thighs. Sliding in close, he gets himself into a position where he has to look slightly upwards to meet his lover’s enormous brown eyes. Apollo is breathing fast and shallow and Klavier leans in to press their bodies together while tugging the defense attorney’s hips forward by his belt to rock up against him.

“Haa- Ah.. Damn it Klavier.. It’s nearly 3:00.. Hahh.. You know I have to go soonnnghh…” Apollo protests weakly but at the same time he’s dragging Klavier closer by his shirt to lick and suck at his lower lip, still mumbling about ‘the time’ and ‘his responsibilities’ as their mouths seal together.

A few heavenly minutes pass in near silence as they kiss, rocking languidly against each other, fingers working into hair and beneath clothing, mouths finding well mapped sensitive areas of necks and ears and clavicles.

How lovely it would be to simply forget the time… to just keep going. Klavier fights with his libido. ‘Mmmm… work that vest and shirt at least open, if not off completely… yank those trousers down to his knees… suck and nibble at all the most delicious parts of his bared body…’ Cracking an eye open to regard the wall clock over Apollo’s left shoulder the prosecutor sighs lightly, placing a final kiss against his lover’s flushed cheek before very reluctantly drawing back. “Three O’ clock, Forehead...” He whispers, and Apollo hisses in frustration, still rolling his hips and clinging to Klavier’s jacket when he begins to pull away.

After a moment and some coaxing, Apollo does finally release his grip and collapse back into the chair with a heavy sigh, chest still heaving and a full erection deforming the line of his red trousers. He drops his head to the side with a groan of discomfort, hair spikes drooping over his eyes. “You are such a cock tease…”

“You are the one with the tight…hmn… schedule , Herr Punctual….” The prosecutor teases but his laugh is a bit rueful. Returning to his desk chair stiffly, he watches his disheveled companion struggle to his feet, groaning aloud.

Klavier smirks as Apollo shoots him a glare, adjusting himself to ease the pressure a little before turning sullenly toward the door. ‘Not that I’m in any better shape…’ Klavier admits to himself, absently rubbing his knuckles over the bulge in his jeans and letting his head fall back with a soft breath of Apollo’s name, just loud enough that he knows the other can hear and chuckling when he can almost feel the defense attorney bristle.

“Come get me at 6:30… Nghh.. You owe me dinner somewhere really nice after this day.” The frustrated attorney hangs in the doorway momentarily but turns with a growl as Klavier grins, blowing a kiss with one hand and yanking his fly open with the other.

As the door slams, Klavier’s phone begins to ring and upon examining the ID he can only raise an eyebrow. ‘Well, that was quick…’

“Herr Wright… I must compliment your… alacrity…”

“…When… do you want to do this?” Klavier can nearly hear how pale Phoenix must be for his voice to sound like that…‘Like he just realized that he’d sold the cow for three magic beans…’ He notes that the attorney is breathing a bit heavily.

Klavier chokes, having clapped a hand over his own mouth to silence himself as the unmistakable sound of leather impacting bare skin continues to echo repeatedly over the line. He hurriedly composes himself again, thinking fast.

“Um…I.. I’m not certain… But I’ll ask him at dinner… Why don’t we try for tonight then? Say 8:00? You can “run into us” at that little Mediterranean bakery he likes. I’ll make certain we’re there ja? Come alone though. If I talk to him at dinner and then you both suddenly appear, he will certainly suspect something… I will notify you if he is opposed to… having an audience…” Klavier pauses, considering, as the sounds of Phoenix’s punishment continue. “Ah… Will you… be up for it?” Klavier has to carefully modulate his tone, resisting the urge to moan in sympathy every time another sharp slap and its accompanying, near silent grunt filters into his ear.

Clearly, Phoenix is now far too distracted to continue speaking with him, so Klavier simply ends the call, eyes wide and mouth hanging slightly open in shock and possibly even more arousal than he’d been feeling when Apollo left.

‘Ja, definitely time to take care of that…’

What Lies in the Darkness Vegeta's lack of trust keeps him awake even though he's completely exhausted. Set at the...
Red Earth (Visions of Harmageddon) Hmm... I was scraching my head while reading this poem cuz i have no idea when i wroted this, but...