Lucian's dying moments and his afterlife. 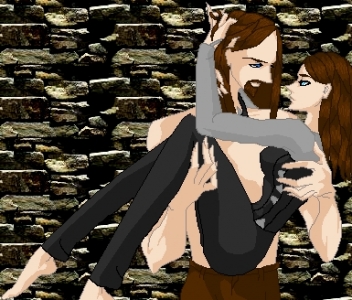 “You may have killed me, cousin, but my will is done…regardless.”

Lucian had that smug smirk on his bearded but well groomed face, pale blue eyes staring Kraven down.

Although, for the life of him, he could see nothing but the bright, luminous, unnatural blue eyes of the vampire aiming a gun at him. Everything else was foggy. His sharp lycan ears heard the click before the bang and he shut his eyes.

The silver nitrate had so numbed him that he hardly felt the impact, although he felt the jolt. He heard the click-bang of five more shots. And then the whisper of wind.

Lucian opened his eyes and drew in a ragged gasp. He was laid out on his back on cold, dark stone, staring up through the ruined ceiling of the building he had so oft snuck off to to be with his Sonja.

The sky was all wrong, at least, in his opinion. The stars wheeled about so fast in their circles they left streaming tails and betwixt them were glowing nebulae. He shut his eyes tightly again and strained to hear the argument he knew must be going on in the real world, away from this dream place that so haunted him in his sleep.

Still, naught but the whispering wind. He felt a hand brush a stray hair from his face and heard a soft chuckle. Those blue eyes shot open quickly and another sharp gasp pulled its way from his chest. Backlit by the spinning stars and nebulae wheeling above, was the face he had so missed, even in dreams.

Sonja's hair was just as chestnut brown as he ever remembered and currently her undead eyes were deepest brown, almost like black pools that he longed to get lost in. Her face was as perfect to him as the day he saw her. “Sleeping? But the view is to die for Lucian.” She said almost as softly as the whispering wind around them.

He shut his eyes and rolled onto his side away from her, his hands clutching his face. “This is just a nightmare…a nightmare that's coming to haunt me before I die!” He cried out in the same true sorrow he had spoken to Michael with.

Sonja frowned slightly and crept after him, draping one of her arms under his and across his chest. She put her lips so near his ear and managed to stifle the urge to cry. “Lucian…you're already dead…”

He peered out from between his fingers over the edge of the ruined building, the countryside just as it had been so many centuries ago, but everything, even in the moonlight and the light of the unearthly stars above seemed brighter and more colorful than it ever had in life.

“So then what…what is this?” Sonja chuckled thickly and pressed a soft kiss to his neck, her fingers creeping up under the jacket he wore, slowly pulling it off one arm. “This is forever.” He rolled onto his back to stare into her face again and managed a smile, despite that his eyes glittered with tears.

There was a God after all and the only thing he had ever truly wished for had been granted him. He ran his hand along the side of her face, delighting in the feel of her skin for the first time in what seemed like eons, and then through that chestnut brown hair, pulling her face down to meet his in an urgent kiss.

Sonja let her weight off her arms and collapsed on his chest, one hand slipping his other arm out of the heavy coat he had worn for so long. His own hands were making quick work of what she had always worn, that buckled leather corset and the chain mail shirt beneath.

It seemed to him that everything that led to her pinned to the stone floor beneath him, completely bare, kissing at his throat and collarbone as he ran his hands over every conceivable inch of her was a whirling blur like the stars overhead.

His hand caught at the back of her knee and pulled her up against him firmly. She hooked her arms under his own, her nails dragging down his back as she pressed her hips up against his own, kissing along the underside of his jaw and his cheek until she caught his mouth, timing the action with the action of him thrusting into her for the first time in what felt like even longer than forever to her.

Being dead and waiting for your lover, time seemed to drift away longer than it did for the living, even if they were immortal. Lucian let out a soft cry and bent his head down to rest against her shoulder as he pressed into her with the passion and urgency of a man that felt as though he were but dreaming and it would be over before it reached its high point.

Sonja moved a hand to grasp the back of his head, her fingers tangling in his wavy hair, her eyes half opening, the stark, luminous, unnatural blue of a vampire reflecting the strange stars of this afterlife beautifully as she arced up into Lucian's every motion.

The hand she left against his back, although shaking, flattened itself out. She could feel all the muscles in his body tensing in time with hers and she could hear him whispering so softly she could barely hear him over the wind whispering, “Not a dream, not a dream, if it is, don't ever let me wake up…”

Sonja's eyes were still stark blue. She gently pet along the side of his face, brushing his hair back behind his ears, occasional shivers still racing through her frame. Lucian dared a small smile. “Not a dream…” Sonja smiled outright and caught his face between both her hands. “Not a dream. Forever.” She answered before catching him in another kiss, both parties complacent to lie together under the strange sky for the time, however long time may be.

Sorry, but this user has indicated that they do not want comments on this entry.