So you wanna write SMEX? - Chapter 1

So you wanna write SMEX? 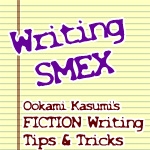 HOW do you get what's in your imagination down on Paper?

Writing Smex is easier than you might think because it's formulaic. I don't mean the story plots, I mean the smexual actions themselves:

Action A > triggers Reaction B, which triggers > Reaction C...

Once you know what you want to happen, the rest is practically Plug & Play.

Be CHOOSY about what you watch. Some of that stuff is NASTY…!

Once you have your favorite scenes highlighted, break down what happened and how, then rewrite the whole scene in your own words. You don’t ever want to use exactly the same words, especially not the dialogue, that’s plagiarism. Paraphrasing, on the other hand, is perfectly acceptable.

-- Anything by Ninn Workx (Google is your friend!) The participants are actually attractive, the sets are very high class, and their genre selections go from sweet & sensual all the way to hard-core kink.

Slash/Yaoi:
Read these for ALL the technical details:

If lube is not used, how much pain there really is? Could it come to real injuries, as in requiring medical treatment? I've read some slash in which it did, but it's mostly women that write slash, so they could be wrong.

-- If the Uke is extremely excited and EXPERIENCED enough to know how to relax their muscles voluntarily enough to allow comfortable penetration, then lube isn't needed. If they're not that experienced then Lube is definitely a necessity.

Okay, so now that you know what you want to happen...

Writing Smex is easy because it's formulaic - not the stories, the way the smex scenes are written.

A smex scene is nothing more than an ACTION Scene, with emotional bits tossed in for flavor, and all Action sequences MUST be written in the Order in which they happen - Chronologically! If you want the reader to SEE the actions that you are trying to portray as a movie in their minds, Chronological Order is the ONLY way to do it.

Something happens TO the character -- starting a
CHAIN of REACTIONS.

2. AND they feel the physical sensations of the Happening -- suffering a Physical Reaction.

3. AND THEN they have an Emotional Reaction reflected in their Thoughts and/or Dialogue about what just happened.

4. AND THEN they Do Something in Retaliation.

This Retaliation Action incites the Other character to do something NEW -- starting the whole Chain of Reactions again.

The flash of pain exploded in my cheek as her hand lashed out to slap me.

Her hand lashed out in a slap. [action]

My cheek exploded with a flash of pain. [reaction]

If you knock the actions out of order, the Reader's Mental Movie STOPS and the Reader has to STOP READING to mentally rearrange what they just read into the correct order to get the movie back. Do it too many times and reading become a chore rather than a pleasure. Never forget, if your story is too hard to read, the reader can always find another story.

Watch for the word 'AS'.

-- Nine times out of ten, ‘as’ in a sentence means that your Actions and Reactions have been reversed.

-- Quick Test : Replace the word ‘ as’ with the word ‘ and’. If ‘ and’ doesn’t read right in the sentence, you can pretty much guarantee that it’s because your Reactions came before the Action that caused it.

- Something happened TO the main POV character

- How they felt Emotionally >

- What they Did or Said* because of what just happened. (*Dialogue is an ACTION!) >

1. Physical Act/ what was done TO the main POV character >

5. Deliberate Reaction / What they did or said in retaliation >

4. Deliberate Reaction / What they did or said in retaliation >

5. Physical Action/Action or dialogue or Action & then Dialogue. >

-- In a sudden rush, Seiki grabbed Ryu's wrist and shoved him back against the wall. His lips came down and covered Ryu's.

-- The firm lips covering his mouth were surprisingly soft, and moist. He could feel a tongue sweeping against his bottom lip.

Deliberate Reaction / What they did or said in retaliation >

-- He closed his eyes tight and tried to pull back, but the wall was right against the back of his head. Seiki's arms blocked him from moving to either side. His wrist was trapped, pinned by Seiki's hand, so he couldn’t punch some sense into him either. He opened his mouth to shout at the big brute.

Physical Action/Action or dialogue or Action & then Dialogue. >

In a sudden rush, Seiki grabbed Ryu's wrist and shoved him back against the wall. His lips came down and covered Ryu's.

-- The body reacts faster than thought. Ask any martial artist. On the other hand, a reactionary comment such as "Ouch!" can go first as it plays the part of an ACTION, rather than a thought.

It has been brought to my attention that someone has been telling the internet writers that Dialogue always comes before Actions in a paragraph, that paragraphs should Begin with dialogue. This is WRONG. Not one grammar book I own supports this in any way. I also brought this little ‘rule’ to two of my publication editors. They laughed their asses off, then told me that if they ever caught me doing it, they’d kick my ass.

Watch for the word 'AS'.

-- Nine times out of ten, if you see the word 'As' you've reversed your Actions with your Reactions.

ONE Point of View per Scene!

-- Or it gets really confusing as to who is feeling & doing what.

NO SHARING!
-- Separate each character’s actions & dialogue from the next.

-- Characters do NOT share Sentences or Paragraphs - EVER. Having two people doing stuff in one paragraph makes the Reader's visuals muddy. The Reader's mental movie - your story - comes to a screeching halt while they try to figure out what the hell just happened.

Put each individual character’s Actions -- AND the Dialogue that goes with those actions -- in a new Paragraph**. It may look choppy on the page, but the reader has absolutely no doubt as to who is doing what. The Reader's perceptions are more important than whether or not your type looks tidy.

(Yes, the dialogue AND the Actions of one character go in the SAME paragraph TOGETHER.)

When describing Sensations & Emotions, Adjectives are your Friend.

-- THIS is where you use all your purple prose. Make every adjective highly opinionated to get the reader right into the action as though THEY are feeling it.

AFTER figuring all this out the hard way, I discovered that this whole routine (Action / Reaction) is explained in exquisite detail in the Writer’s Digest book: Scene and Structure by Jack Bickham

~~~~~~~~~~~~~~~~
DISCLAIMER: As with all advice, take what you can use and throw out the rest. As a multi-published author, I have been taught some fairly rigid rules on what is publishable and what is not. If my rather straight-laced (and occasionally snotty,) advice does not suit your creative style, by all means, IGNORE IT.