Axel's life is boring... And I mean... BORING... So his roommate decides to spice up his life - Sora/Axel 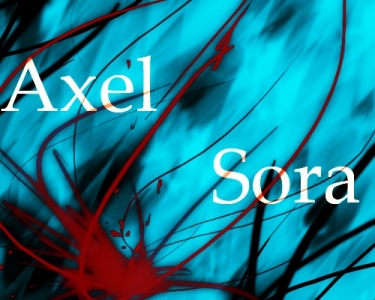 Axel sighed, he had been looking out his window... one would think Axel believed that if he kept staring something would happen. However the redhead knew nothing was going to happen, his life was boring... Nowadays at least. His life was kind of interesting when he dated Larxene, sweet girl... Well not really, she was a walking wench, but she was fun. She had been friends with Axel since the seventh grade.

They tried dating but realised they didn't feel that way for each other.

Axel sighed and put his hands on his forehead, the sun kissed his bare chest. In nothing but his red boxers, lying on his single bed waiting for something to happen.

"Axy, you still in bed." Sora sighed and walked in.

"Yep... Its Saturday, I can sleep as much as I want." Smiling, well at least he had his roommate to make him laugh.

"God, you’re so lazy." He sat on the bed, looking out the window, "Whatcha lookin' at?"

Axel smiled, "Nothing." His eyes closed, the sun was warm.

"Tell me about it." Axel shook his head before pushing his head in the pillow. "Have I become boring?"

"Thanks." The redhead sighed, "How do you keep yourself interesting?"

Sora blinked, he thought about it for a second. He suddenly had an evil smirk.

"Sora... what does that smile mean?" He flipped over so his back was down.

"Nothing." He pressed a finger on the bare chest. "Have I ever told you that you're really hot?"

"Your welcome." Sora dived closer to the other.

"So uh, what are you doing?" The redhead felt excessively awkward.

"Making your life interesting." Sora softly pressed his lips on the soft neck. He could feel a mix of a protest and enjoyment from the redhead; he smiled softly and went down to kiss the chest.

The brunet kissed the perfect muscles, oh how many nights did he dream of jumping the redhead? He whispered a soft moan and began indulging himself as he moved lower and lower... He could tell that the redhead knew what was coming next and he smiled. He was perfectly in control of everything that would happen, softly moaning into the skin. He felt the redhead shiver and he smiled.

"S-Sora, m-maybe we sh-should stop!" He tried to push the other away, but he couldn't bring himself to do it, what was worse was his erection was clearly visible through his boxers. He could feel it rub against the brunet's body and he ground his hips on the other.

Sora giggled, yes he giggled. A soft sound that made Axel even harder. He grabbed the trim of the boxers and threw off. He watched the redhead in a mix of confusion, embarrassment and pleasure... But what was really confusing was why the brunet just stopped moving.

"Big." The younger commented before touching the sensitive skin with a finger, he gave small and teasing strokes to the other. He heard a moan and he gripped the member with a firm hold. Softly rubbing it up and down. The brunet smiled as he slowly licked the underside.

Sora let his tongue dance on the member, hitting sensitive spots and sensual motives. He raised his head and gripped the base of the cock with his with his hand, softly placing the mouth in his head.

Axel shivered in delight; he softly put his hand in the brunet's hair. Why exactly was he letting his roommate blow him? He couldn't think, not even the fact that the cute brunet was a male crossed his mind. He watched the other bob his head up and down until he watched the other gag for a second.

Axel wasn't sure but he took it as a compliment, he just felt the damp mouth on his erect member and he hissed. He couldn't help but buck his hips a few time, he looked down and saw those blue eyes return his gaze.

Sora bobbed his head one more time, he managed to put more in his mouth, somewhat deep throating it yet but he doubted if he could put it all in. It would probably take a lot of practice, and judging by Axel's current reaction, he would definitely have another chance to... sin with the redhead.

Axel was somewhat surprised when the brunet removed his head from the cock, he purred when he felt Sora running his tongue along the head of the cock. He gently put the head into his mouth as he sucked down further and further... A soft moan was given by the redhead, they made eye contact. He screamed a bit when he felt a rough suck and he bucked his hips up a few times, suddenly feeling himself close to the end he grasped the brown spikes and made a hissing sound out of pleasure.

Sora smiled he increased his rate and quickly bobbed his head, he knew the other would freak out about what they just did, but that would make it all the better. He suddenly felt liquid enter his mouth without warning and he released the head...

Axel climaxed and threw his head back, he sighed with a smile as he heard Sora ingest all the white fluid... He looked down and sat up a bit. "Sora..."

"Anyway, I have to go now." He stood up and wiped his face with a Kleenex box on Axel's desk.

"What?" The redhead blinked, "I want to talk abou-"

"I have that job interview." Sora pointed out.

"Think about me." The brunet winked before skipping off.

Axel suddenly realised, he was getting more than he bargained for... his life would be interesting now...

TNT: The Nihilistic Tendencies 2CH, Heavy Slash, FullMetal Alchemist. Zolf Kimbly and Frank Archer are inexplicably put in the...
The Road Trip Asleep at the wheelâ€¦ It really seemed that night that we could have driven right off the...