AU university setting. Roy finds himself fascinated by the school's prodigy student, Ed Elric - but his seduction doesn't go quite as planned. 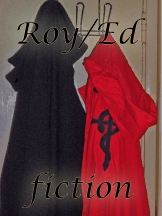 The Technology and Engineering Fair had a good turnout overall this year—but the undeniable champion was the booth for Rockbell Automail.

The small prosthetics shop had a well-deserved reputation and had made quite a name for itself even outside of automail circles. The booth was currently being staffed by Winry Rockbell, a very personable and charming young lady, so it was no surprise that it was well visited. But the majority of the crowd, it seemed to Roy, had less to do with the booth itself and more to do with the two young men on the makeshift stage behind it.

The chemistry major found a planter far enough away to be out of the crowd but still near enough to see and settled down on the edge to watch. He had to hand it to whoever had come up with the idea; the two-man concert both drew attention and nicely showcased just what a Rockbell limb was capable of. Roy hadn't known it was possible to play guitar so well with metal fingers.

The automail, though, was not what was keeping his attention. The limbs were impressive, of course. The younger boy was executing a complicated bass line with not one, but two metal arms, easily keeping up with the melody provided by his older brother. Said older brother was strumming and picking with his flesh-and-blood left hand, while his automail fingers flew through a dizzying series of chord changes.

But it was the boy himself that had Roy's focus.

A gold ponytail swayed and jumped behind him as he moved with the music. He was throwing himself into the performance with a playful exuberance, evident in the grin he couldn't keep off of his face. He was feeding off of the ever-changing crowd, but it was obvious that the music itself was his passion. Roy hadn't known that the Elrics, the university's much-lauded genius brothers, had a talent for music, but he shouldn't be surprised. They seemed to excel at just about everything they applied themselves to, both academic and physical.

But for him, it was just one more item to add to the long list of Things That Make Ed Elric Fuckable.

The boy was just turned sixteen, but Roy had given up on feeling guilty about being attracted to someone so much younger some time ago. After weeks of debating and outright arguing with the prodigy both in and outside of their classes—often to their teachers' displeasure—he was hard pressed to see the youth as anything other than a peer and equal.

The roots of his physical attraction could be blamed on one evening of watching him compete in a wrestling match. Now where most people saw a boy genius, all Roy could see was a delicious piece of man-flesh.

The brothers had finished up their set and were setting their guitars on the nearby stands. Roy watched with great interest as Ed wiped the sweat off his face with the hem of his shirt, inadvertently providing the crowd with a teasing glimpse of his abdomen. Judging by the girlish squeals, Roy wasn't the only one who wanted to trace those ridges and planes—preferably with his tongue. The blond boy seemed all but oblivious, though, as he tossed off a wave to his brother and his friend and announced he was going to grab some food.

Roy hopped off his perch and hurried after. Lust aside, he did have a legitimate reason to stalking his prey at the moment.

He caught up just as they broke out of the crowd from the fair, and on impulse he reached out and snagged the trailing end of that tantalizing golden tail.

Ed whipped around fist first, and Roy jumped back to avoid getting back-handed by metal. "Get off of—what the fuck do you want?"

"Nice to see you, too Ed," the older man replied with a smirk. "We missed you in Mister Tucker's class this morning."

Ed rolled his eyes, turning to make his way across the lawn. "What are you, the attendance police? Tucker cleared me for this last week."

Roy fell into step beside him, much to the blond's displeasure. "That may be, but Tucker assigned the teams for the final project today. I'm sure you'll want to know who you're working with; this counts for a third of our grade, after all."

The youth snorted. "Like it matters, I'll just end up doing the whole thing like usual. . . ." He drifted off and came to a stop in the middle of the lawn, slowly turning to glare. "No. Absolutely not."

"No, what?" Roy asked with feigned ignorance.

"No, I am not working with you." He jabbed a finger at the taller man's chest. "Absolutely not."

He shrugged. "Sorry Ed, but the teams have been assigned. You could try taking it up with Mister Tucker, but I'm not sure you'd find anyone willing to switch." What he didn't say was that no one else was particularly keen on the idea of working with the teenager. Ed was easily the smartest one in the class, but he was also caustic and short-tempered. More often than not, he intimidated the other students. Roy, on the other hand, found the challenge appealing.

Ed shoved his hands through his bangs with a growl of frustration. "Fuck! Fuck Tucker and fuck you!"

Any way you like, was what Roy didn't say. "We don't have much time to get this done, so we'll want to start on it right away. Shall we meet at the library this Saturday?"

"Everyone's gonna be at the fucking library," he grumbled. He seemed to debate something for a moment, before folding his mismatched arms and scowling. "I've already got all the books we'll need at home," he mumbled to the air just to Roy's left. "Y'might as well come there."

"This does mean you'll have to tell me where you live."

With a loud sigh, Ed did so, before stomping off to the food court.

Roy smirked to himself as he headed for his next class. If he played this right, it may turn out very well indeed.

FMA: Serpent's Dance Modern AU; Roy goes to check out the new act at a local club.
Man From Beyond the Boarders This is a 100 Writing Challenge that I am doing with the friend. Mine is one combined story...