There is a ton of information on the Heroic Cycle, or Hero's Journey, but what about the Heroine's? Being a female that prefers to write stories with a female lead, I decided to do a bit of my own research into the myths and fairy tales that feature Heroines rather than heroes. What I found was a little...startling. 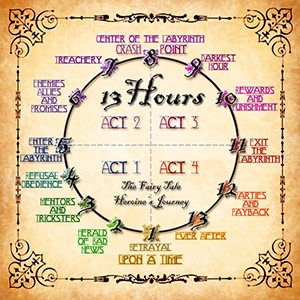 There is a ton of information on the Heroic Cycle, or Hero's Journey, but what about the Heroine's? Being a female that prefers to write stories with a female lead, I decided to do a bit of my own research into the myths and fairy tales that feature Heroines rather than heroes. What I found was a little...startling. While many things in the Hero's Journey still apply, Her journey is not quite the same as His because the path the Heroine takes through the labyrinth is guided by her Heart not her head--or her sword.

There are Thirteen stages in the Fairy Tale Heroine's Journey. Thirteen hours in her clock of adventure--one for each full moon in a year.

Fair Warning: The fairy tale examples used here are my opinionated interpretations of the oldest and Grimmest versions I know.


1. Upon a time ~ Secret Betrayal
~~~~~~~~~~~~~~~~~
Too pretty, too smart, too loyal, too friendly, too obedient, too good at housekeeping, or sewing, or spinning, or making the flowers grow--someone is always out to get the Fairy Tale Heroine. Though it's usually a jealous (aging,) female relative that betrays her, male relatives do too--by trading her skills for cold hard cash.

2. The Herald ~ Bearer of Bad News
~~~~~~~~~~~~~~~~~
This is the Catalyst--a friend, family member, enemy, or object that reveals the deed, promise, or debt for which she is being held accountable, or the deadly danger she's being sent into.
3. Refusal of the Call ~ Obedience to the Call
~~~~~~~~~~~~~~~~~
Unlike her male counterpart the Hero, the fairy tale Heroine either doesn't want to refuse the call to adventure, or isn't allowed to. She may argue, fight, weep bitterly, or bolt outright, but someone's life or honour is usually if not always on the line--frequently her own. Ruled by her heart rather than her head, she has no choice but to answer it.

On a side note, when these stories were originally told back before the Dark Ages, women were taught from early childhood to be obedient in all things. Only men were allowed a Choice.

4. Mentors, Tricksters & Costly Gifts
~~~~~~~~~~~~~~~~~
A mentor/trickster comes offering gifts. The Mentor is one who actually cares for the Heroine and wants her happy. Tricksters however, are out for themselves. They want whatever they can get out of the Heroine. If what they grant makes her happy, that's nice, but not necessary. Occasionally, a Trickster such as Baba Yaga can become a Mentor, but that normally takes a lot of pretty impressive work on the Heroine's part.

The gift could be: In all cases, there is a life-altering price on such gifts. Sometimes the payment is a trinket such as a necklace or ring, but more often it's a promise to be delivered later, or a first kiss--meaning her virginity. Occasionally it's a body part such as her hands, her voice, her hair, her finger, or her firstborn child--the medieval euphemism for her virginity and continued sexual favours until pregnant. In other words, a common law marriage.


5. Enter the Labyrinth
~~~~~~~~~~~~~~~~~
She gives in to temptation and takes the offered gift, crossing the threshold to the labyrinth and committing herself to a path where there is no turning back.

This scene can be played out as a rescue which usually includes the demand of a reward such as a kiss--the symbol for outright seduction.
~~~~~~~~~~
This scene can also be played straight.
~~~~~~~~~~
Or in Reverse.
~~~~~~~~~~
6. Secret Allies, Secret Enemies, Deadly Gifts & Scary Promises
~~~~~~~~~~~~~~~~~
Entry to the labyrinth has been gained, but there's another, even more dangerous task or temptation to deal with. Another gift is offered with an even higher price-tag, a more chilling promise. She has every intention of fulfilling her bargain, but she has secret enemies.

9. Ordeal ~ The Darkest Hour
~~~~~~~~~~~~~~~~~
She faces her greatest fear and death. Unfortunately, she doesn't have any actual weapons at her disposal but her wits. Back then, women weren't allowed to touch things like swords or knives. Fighting wasn't feminine.

10. Rewards & Punishments
~~~~~~~~~~~~~~~~~
If she survives the Ordeal, she is rewarded with release from the heart of the labyrinth--or punished by expulsion. Either way, she is permanently marked by her experience.

11. Release from the Labyrinth
~~~~~~~~~~~~~~~~~
She heads back to the Ordinary World with a mission to accomplish. At the last threshold, she replays her very first act of commitment, a keepsake gift, a vow, or a kiss.

12. Confrontation & Rebirth ~ Parties & Payback
~~~~~~~~~~~~~~~~~
She returns to face her original betrayer. She needs them to acknowledge what they have done to her. This scene is often played out as a visit to her home in her bridal finery and a huge feast. However, this is also when the wicked are punished.

13. The Last Promise and Ever After
~~~~~~~~~~~~~~~~~
After all her final goodbyes are said, she returns to the Labyrinth to take her place there and receives one last gift, normally a crown or wealth, and makes one final promise. Sometimes it's merely a wedding vow, sometimes it's not.

Their own body betrays them by wanting sex -- and love.

"That person Likes you!"

3. Obedience to the Call

"They haven't told you everything."

Spying, Prying, and Stalking--oh my!

To Trust and go on, or Not to trust and dump them?

13. The Last Promise and Ever After

Wait, FOUR Acts, not Three?
~~~~~~~~~~~~
Correct. The Fourth Act is the main character's resurrection from their Ordeal, their rebirth and exit from the labyrinth. Only Tragedies, like Red Riding Hood  finish at the end of a Third Act because the main character (or the relationship) does not survive the Ordeal.