A Yu Yu Hakusho story that I am writing with my sister, Ashley. This involves our characters Naeriel and Ryniaen. 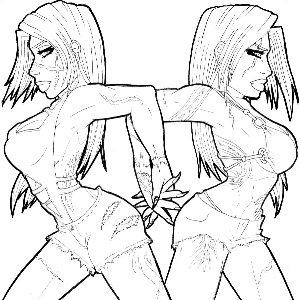 The morning seemed as if it was darker than what the nighttime had been only hours ago. Threatening clouds swirled through the sky, hinting at the precipitation that they could potentially plummet onto the soil. A low bellow followed a brief flicker of illumination, but there was still no rain nor was there blustery weather. It was almost like the calm before a dreadful gale; even the birds were still optimistic and chirped in the many trees surrounding the area. This would not last long as it never did. Storms were frequent in the autumn, though they were always outnumbered by the amount in the spring. The spring only lasted a couple of weeks before it was blistering enough to call it summer and the seasons were always irregular.

A loud bash of thunder shattered through the atmosphere and an undersized, abandoned house vibrated faintly, the lightning lighting up almost every corner of the windowed rooms. This revealed a tiny bundle that had a comforter covering it. The mound stirred to some extent, a shallow breathing pattern of two entities rising from it. A surge of wind fled throughout the house, uncovering the bodies of two youthful women from under the frayed blanket. They both looked no older than eighteen years.

Neither girl moved, their wilted bodies almost lifelessly lying there. With knots in their hair and clothing worn to shreds, it was evident that they were not wealthy and had no home. It did not even look as if the house they laid in was theirs. The windows had no glass, which was littering the ground, and the paint was chipping off of the walls. Their bodies were plagued with scars too abundant to ever calculate, but there were some scars that stood out from the rest. They were bruised and broken down, a mangled and gruesome spectacle. Blood spattered and puddle the floor as well as their bodies, close to being dry. They did not look like they belonged where they were at all.

Voices chimed over the echoing sky, approaching and sounding insistent as a soft trickle of rain started to fall onto the ground. There were footsteps much closer sounding than the voices. A pair of eyes opened from one of the bodies, a lifeless look overcoming them. She glanced up at her surroundings, a man coming into sight, her closing eyes traveling from his emotionless and crimson eyes to a third eye in the heart of his forehead. She had not been conscious for more than a couple seconds before she was passed out once again.

The young man stood there, watching the girls as they lay unconscious. His eyes met their hair, their scarred faces, and the burns that covered their wrists. After a few moments of simple curiosity passed, he turned and sat in the doorway. The voices from outside had now traveled inside ringing throughout the house. The man did not look at them as they stepped into the doorway, but instead, he continued to look out of the glassless window and the rain pouring through it. The girl’s bodies glistened with drops of the rainwater.

The two voices belonged to a pair of young men, whom clearly knew the man sitting in the doorway. They looked from their friend to the girls, both getting a shocked expression across their faces. “Hiei?” the brown-eyed one said, glancing back to the man on the floor. His tone sounded like he was trying to insinuate that the man called Hiei had done that to the girls in front of them, though the truth was far from that.

Hiei glared at him for only a second before standing and walking away, his wrapped arm resting against the sword that was tied to his belt. He had no desire to be blamed for something that he had not done. The other man walked over to the girls after Hiei left. He felt their pulses from their necks, his mind concentrating on the seconds going by. He seemed to know what he was doing as he was extremely gentle with what he did. His friend walked over to him and the girls, curious to whom they were and if they were okay. Hearing him approach, the quiet one looked at him, his emerald eyes swimming in sorrow.

“I am afraid that they are in terrible shape, Yusuke. They do not look like they are even capable of being conscious at this moment. The wounds are too old to be Hiei’s doing anyway, so if you would go and apologize to him, I would appreciate it very much,” he explained, his hand just barely touching the burns on one of their bodies. “It seems as though they were in some kind of chains before they were here.”

As his hand grazed the burns, the girl jerked her arm away, her forest green eyes opening. Her first reaction was to kick herself away from the stranger that was kneeling next to her, but she quickly realized that she did not have the strength to move very far at all. A whimper and a whine escaped her lips as she struggled to move, the wounds on her body opening again. She looked to her other side and saw the other girl lying there. She was still unconscious so she crawled over to her.

“Sister!” she screamed her voice hoarse and frightened. “Wake up, wake up, Ryniaen! This is Naeriel, your sister!” There was no answer for several seconds, and another whimper escaped the girl’s throat as she reached out a trembling hand. “Sister, please…” She whispered setting a gentle hand on her sister’s bleeding arm. The gentle touch seemed to rouse the sister slightly, and for just a moment, their eyes met. Pleading yet defeated, cold, lifeless. Those eyes sent a clear message before they slowly closed again.

Letting out a soft whine, Naeriel fell to one side, too weak to keep herself up any longer. Carefully, she rolled over to face the two men. She looked deep into their eyes, attempting to find any harmful intent. But all she saw was concern, anger, fear and sadness. Closing her eyes, she attempted to gather her remaining energy before she fell back into darkness. “Please, help…” She whispered, opening her eyes once more to stare pleadingly up at the two strangers. “My sister… Help my sister,” she said with more strength, thankful that Ryniaen wasn’t awake to scold her for this. She knew very well what her sister’s silent message meant. But, when did she ever listen in these situations. Letting out a choked laughed, she gave the two strangers one last glance before closing her eyes and falling unconscious once more.

There was silence within the room for several seconds as the two boys stared sadly down at the scene before them. From outside, a flash of lighting lit up the small, dreary room. Seconds later, a drum of thunder sounded in the distance. Clenching his fists, the green eyed boy slowly lifted himself into a standing position. His mind was racing with plans and possibilities, his eyes examining the severity of the girl’s wounds and the surroundings in which they lay. Then he glanced over to his friend, who was obviously at a loss for words. His dark brown eyes were wide, staring at the girls at his feet. His eyes shifted through several emotions at once, showing anger, fear, concern, sadness and disgust. His face was pale, and his fists clenched tightly.

“Hey Kurama…” The boy eventually asked, staring at the girls for a few more seconds before turning to face his red haired friend, Kurama. His voice was hollow, as if he truly found it difficult to speak. “What are we going to do? We can’t just leave them here.”

Kurama glanced back at the girls, scanned the room, and then looked back at his friend. “I believe I could help them, if we do it quickly. But it wouldn’t be wise to do that in such a place. We need somewhere cleaner, with more light…”

“My house is closer than yours,” the other boy interrupted, looking determined. “My mom’s out to the bar all night, so we could keep them in my room until they’re healed up enough to move somewhere else.” He stood tall, silently daring Kurama to argue; no argument came. Kurama merely nodded and gave a small smile.

“If you insist, Yusuke,” Kurama said as he walked over to Naeriel. He lifted the girl from the ground as carefully as possible, apologizing instantly when he heard her give an unconscious moan of pain. Within second, his clothes were soaked in the girl’s blood, and he knew they had to make it quick if they wanted to save them. “Hurry and grab the other,” he ordered Yusuke, as he made his way towards the door. Yusuke did as he was told, instantly surprised by all the wounds he saw now that he had gotten a closer look. He turned on his heels and followed Kurama out the door.

Silk & Sable A Yu Yu Hakusho fanfic. The Lord Karasu, an aristocrat known for his cruelty, returns to his...
The Shining Light When Era rescues a dragon egg from being crushed, she is soon faced with a choice. - To hand it...