Look at Plotting as being a Map of the route you plan to take. Once you know where you are going, getting there is just a matter of staying pointed in the right direction. This doesn't mean you can't take off-roads or stop to look at the scenery, it just means that you won't get lost while taking those scenic bypasses. 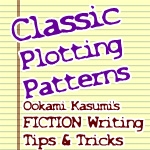 -----Original Message-----
"I'm writing my first erotica novel, and I've set a Daily Word-count limit to improve my writing speed, but writing a whole novel takes so long. What are some other methods to break down a novel so it isn't so overwhelming?"
-- Enthused but Overwhelmed
~~~~~~~~~~~~~

Dear Enthused,
-- Besides setting daily word-count goals, another method for cutting novel-writing into bite-sized chewable pieces is to write the story Scene by Scene. However, this method means planning the book out from beginning to end BEFORE you start writing, also known as: PLOTTING.

Aristotle's Plotline:
From: "Elements of a Tragedy"
~~~~~~~~~~~~~~~~
1. The reversal of the protagonist's fortune is brought on by a personal flaw.
2. The eventual recognition by the protagonist of this tragic flaw
3. The resulting moral consequences of their actions.

Aristotle Translated:
~~~~~~~~~~~~~~~~
1. Glorious Hero does something he really shouldn't do, and everything falls apart on him.
2. Not-so-glorious Hero scrambles to fix it, and realizes that it's his own damned fault.
3. Hero crashes and burns. (He dies, she dies, everybody dies...)

Look familiar? It should. This is where the traditional Acts: One, Two, and Three, come from. However, most modern plot-lines have a Fourth Act:

4. Burned hero fixes Himself and ends up fixing the problem in the process.

1. EXPOSITION: The mood and conditions existing at the beginning of the play.
2. EXCITING FORCE: The initial incident.
3. RISING ACTION: The series of events that complicate matters.
4. CLIMAX: A crucial event where the tragic hero begins his downward spiral.
5. FALLING ACTION: Advances and declines in the various forces acting upon the main character.
6. CATASTROPHE: The consequences of the hero’s actions.

Freytag (Shakespeare) Translated:
~~~~~~~~~~~~~~~~
1. EXPOSITION: Once upon a time there was a moderately Decent Guy...
2. EXCITING FORCE: Decent Guy runs into trouble, and pisses the wrong people off.
3. RISING ACTION: While trying to fix things, Decent Guy does things that are not-so decent.
4. CLIMAX: Everything totally falls apart on Decent Guy. He panics and does the one thing he really shouldn't do.
5. FALLING ACTION: Decent Guy suddenly realizes just how badly he messed things up and scrambles to fix it -- but it's too late!
6. CATASTROPHE: With a stiff upper lip, and a really long speech, he dies, she dies, everybody dies. (Othello / Hamlet / Romeo Juliet / MacBeth...)


The Mythic plotline:
From Joseph Campbell's Mythic Cycle
(Paraphrased -- so I won't get into copyright trouble.)
~~~~~~~~~~~~~~~~
This is the pattern that most Walt Disney movies follow and Star Wars uses.

Looks a lot like the Mythic Structure doesn't it? It should. Fairy Tales are in fact old pagan myths that were adjusted to suit cultural changes.

Interestingly enough, only the really old tales in their original forms, (not doctored to make them suitable for children,) follow the entire pattern. (The Goose Girl, Donkeyskin, East of the Sun-West of the Moon, the Grimms' Snow White, Jack & the Beanstalk, Vasalisa the Wise, Mother Holle, Wild Swans...) The modern (sanitized,) tales skip whole sections.


The Erotica Plotline:
From 1001 smut magazines and smut story sites.
~~~~~~~~~~~~~~~~
In Erotica the basic plot is always the same: "They NEED to have sex - and they'll do anything to have it!" However, there are many Genre Variations:

Honestly, an Erotica plot really IS that simple.

The easiest way to plot an Erotica Story is to decide on what you want for your climactic sex scene, then build a story and characters around it to make it VITAL for that scene to happen. You couldn't possibly write anything Other than Erotica.


In Conclusion…
~~~~~~~~~~~~~~~~
The fastest way to write a story is by knowing what you want to write BEFORE you start writing. Plotting is also the easiest way to keep from writing yourself into a corner or getting lost in the details.

Look at Plotting as being a Map of the route you plan to take. Once you know where you are going, getting there is just a matter of staying pointed in the right direction. This doesn't mean you can't take off-roads or stop to look at the scenery, it just means that you won't get lost while taking those scenic bypasses.

Silk & Sable A Yu Yu Hakusho fanfic. The Lord Karasu, an aristocrat known for his cruelty, returns to his...
The Shining Light When Era rescues a dragon egg from being crushed, she is soon faced with a choice. - To hand it...