Finding a Bit of Trust - Chapter 1

Finding a Bit of Trust

With one little act of revenge, Naruto has to find out how life will treat him this time. 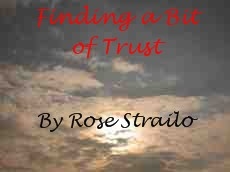 She said it had been an accident

Disclaimer: I do not own Naruto or its characters in any way or form. I make no money from this piece of fiction and will continue to make no profit from this fiction. I do this for pleasure.

AN: You see this fic here? You see it? Do you know who's fault this is? Do you? I blame this on trulywicked. That's right, I blame her. Because she likes Ibiki/Naruto but no one wants to write it for her, I started this for her.

Personally, I love Ibiki/Naruto. I really do. It's just such a kicking pairing, cause you know under that rough and tumble personality and all those scars, he's got a heart that he protects to not get hurt again. And Naruto? Well, hell, look at his past. There has got to be more depth to him then what is shown!

And damnit! We're adults! (I hope.) We deserve some smutty goodness!

Mind you, I'm not really sure about this first chapter…and there is a reason for that. I don't know. *wrinkles nose* I might have to figure things out. Put this in extras due to the fact that I have a lot of Sakura and Tsunade.

Okay, now that is over with, remember, for those on AFF.net, reading is all well and good, but it sucks if there's no reviews. For those on Y!, for every comment I will love on you.

She said it had been an accident. He highly doubted it since she had gone out of her way to hunt him down and drag him to Tsunades and her testing area. He didn't believe one word that was spilling out of her mouth, each one more syrupy and fake then the last.

“…I'm so sorry, Naruto. I really didn't know that it would do this to you,” Sakura babbled, stopping at the glare that was tossed her way by the male sitting in front of her and the Hokage. With long blond hair that was kept in a ponytail most of the time, blue eyes that usually sparkled with mirth and happiness and a rather slim body, all of it making one nice little package, Naruto was beautiful.

`He had always been beautiful,' Sakura thought to herself, sneering at the fact. `That's why Sasuke-kun never looked twice at me. He had this pretty boy sitting in front of him the entire time. I bet it was his fault that Sasuke-kun left to.'

“Haruno, shut the fuck up will you?” Naruto finally snarled, his lips pulling back to bare his teeth at her. “This is your fucking fault. You knew exactly what would happen when you stuck me with that damn needle! I've heard you and Tsunade talk about it and your experiments! I'm not dense, you damn woman! And now, thanks to you, everyone will think I'm some demon!”

Standing up, he paced the length of floor, his footsteps gentle, even in his obvious anger.

Oh yes, Naruto was beautiful. In anger, in sadness, in pain or in pure happiness, he was beautiful, gorgeous even.

But now, he was deadly in his beauty.

With ears sitting on top of his head and a long tail trailing behind him, both of which were constantly in movement, he was more then just beautiful. The delicate claws that tipped long fingers added more to his looks. The over all effect was something not male. Not female.

Sakura couldn't help but feel happy that while he was even more beautiful, he would still be considered a demon, even though she let none of this to show on her face.

“Haruno,” Tsunade says finally, glaring at her student, making her pause in her gloating, “you will go outside, than you will allow the ANBUs to escort you out of here and take you to the Interrogation division. From there, Ibiki will interrogate you. You will answer him truthfully. He will know if you don't and he will use his specialties on you if you don't. With. My. Blessing.”

Swallowing, the pink haired girl nodded and left the room, letting the ANBUs that were standing there to lead her away.

Naruto in the mean time had fallen into a seat again, burying his face into his hands with a soft sound of distress.

“Everything I've worked so hard to achieve…everything I've worked so hard to get…it'll all disappear now,” he sniffled softly. “The respect that I gained, the right to move freely…Oh, Tsunade, what am I going to do? Why did she do it?” Sighing softly, Tsunade stood up and moved over to Naruto, sitting next to him and pulling him close, her hands moving through the others hair.

“I don't know, baby. We'll figure it out, I promise,” she said softly, watching as Naruto slowly cried himself to sleep, his face puffy and red, but still so beautiful. It broke her heart to see him so sad, it really did. She just hoped that it didn't break him in the process.

If only he knew just how many people, both shinobi and villager, would throw a hissy fit about this happening to their blessed protector, he wouldn't be worrying so much. But he didn't know. He didn't see it.

He was still so sweet and nae, even with all the blood on his hands.

Untold Redemption This will be another universe but not too far fetched...Chaos taking on Seph....mmmm I so look...
Death and Desire [Gundam Wing] When someone he thought was dead comes back from the grave, so to speak, Heero...