Gundam Wing Alternate Universe; takes place in modern-day New York City. A lonely boy, made homeless by a violent, unforgiving father, plays his violin in the park to shut out the horrors of the world. Another lonely boy, alone but for one sister, wants to protect him. 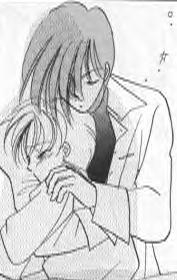 Gundam Wing characters © Sunrise.  Used Without Permission and NOT for Profit.

Summary: Alternate Universe; takes place in modern-day New York City.  A lonely boy, made homeless by a violent, unforgiving father, plays his violin in the park to shut out the horrors of the world.  Another lonely boy, alone but for one sister, wants to protect him.

Warnings:  Rated "M" for language, mature themes (some mild bara between 03 x 04 in later chapters) and some violence, and there is NO character bashing in this, except maybe Dorothy, Quatre's father, and some of his sisters.

"YOU UNGRATEFUL LITTLE BASTARD! HOW DARE YOU SAY THAT TO MY FACE!!" a tall man, Zaid Winner, bellowed at the youth standing in front of him.

The youth, his only son Quatre, knew the blow was coming before it struck his porcelain pale cheek, but did absolutely nothing to avoid or block it.  His father was in one of his infamous rages, and the fifteen year old knew that nothing he did would save him from this beating.
As his father's meaty fist smashed into his angelic face, blackening his eye and splitting his lower lip, Quatre recalled the last time he'd seen his father this angry.  It was the day his mother, Quaterine Benoir, vanished off the face of the Earth.  He had only been four years old at the time, and she'd probably done something to piss him off again, because he had brutally beaten her, too.

Some said that Zaid killed Quaterine for being unfaithful to him, based on the fact that Quatre, with his pale blond hair, turquoise blue eyes and slender built, looked like a masculine version of his beautiful mother and nothing like his father.  That rumor, though, was hilarious when you took all the facts into consideration.  In truth, Quaterine was Zaid's under-aged "mistress," not his wife; he'd married and been divorced by fourteen wives in his thirty-five years of adulthood, and he sure as Hell wasn't looking for number fifteen.

Another, more plausible rumor had it that Zaid had run her off and that he only kept the boy, his only, albeit illegitimate son, to spite both Quaterine's family and his twenty-nine daughters.  This one was mostly true, but the plain fact was that Quaterine had wanted her son to choose which version of God he worshipped, even if that was none at all, to love whom he wanted to love and to live the life he chose to live.

In a strange way, Quatre felt like he deserved this beating.  As his slender body hit hard upon the floor after a punch to the stomach, he realized the chances of something he did making his father happy were somewhere between slim and nil.

If only he had swallowed his miniscule pride, kept his big mouth shut and accepted the plain-looking but obscenely wealthy girl he'd been betrothed to since he was one, his father might have been happy with him for a change.

Somehow, every endeavor Quatre ever attempted was never good enough for his father.  By the age of six, the tow-headed boy had taught himself to play the piano just from being shown the middle C key and how to play the violin by watching a concert on TV.  He could also paint and draw, and had some mechanical leanings, as well.

He'd even received an invitation to attend St. Gabriel's Academy, one of the best schools in the city for studying art and music.  Zaid dismissed all of it, especially Quatre's love of music and art, as frivolous pursuits that would do nothing to make Winner Industries a profit.  Power and money were all the elder Winner cared about, and it didn't matter who he sacrificed on his path to gaining more.  As for St. Gabriel's, it was nothing more than a waste of money and time.

So why was Quatre enduring this beating?  Because he finally told Zaid that he not only had zero interest in taking over the family business, he didn't believe in a God that would allow his father to abuse him, and that he had no interest in marrying any female at all because he was gay.

That was the straw that broke the camel's back, and now Quatre was more than likely going to pay for his freedom with his life.  He had been a prisoner of this gilded Hell all of his young life, and one way or another, that was going to end tonight.

"Go ahead, Father," Quatre finally croaked through swollen, split lips, the honorific burning his tongue like acid.  "You never cared nearly as much for my mother and me as you do your status."

Quatre was getting dizzy from the blows that continued to rain down on him from his father's fists, yet counted his blessings that at least he wasn't being kicked like he'd been the last time. He curled in on himself, protecting his stomach from further abuse, but never once cried out or begged for his father's nonexistent mercy.  He might have looked frail, but he was no weakling.  He'd proved time and again that he could take whatever punishment Zaid could dish out.

As if guardian angels had been sent from Heaven, several men stormed into the room and pulled Zaid off the beaten and bloodied form of his son.  One of them told the boy to run, and run he did after stopping at the conservatory to grab the one thing he possessed that truly mattered to him, his precious Stratavarius violin.  There was no way in Hell he was leaving that behind for his father to smash.

Then he ran away from his golden cage, ran until his breath sobbed in his chest and his aching legs collapsed under him, and for the first night of many, he would sleep on the hard ground with only the clothes on his back for a blanket and a stone for a pillow.

Author's Notes: No, I don't much like Zaid (or Zayeed) Winner at all.  In Episode Zero, he made his only son feel that he had less value than a Petrie dish of mold, and in the series, he tried to extort a promise from Quatre to never  pilot a mobile suit.

two because one ,one become 2? A training session suddenly takes a turn for the worst and Gogeta ends up impregnating Gotenks....
FMA: a Party to Remember Ed contemplates his reasons for being at a stuffy holiday party, and the man who invited him...