You In My Nightmare - Chapter 1

Home » Writing » You In My Nightmare » Chapter 1

You In My Nightmare

(Complete) Mini-sequel to Lovers and Friends. What if Sessho-maru hadn't chosen Fawks as his mate? With the man she loves mated to someone else, but still unable to let her go, Fawks tries her best to keep their ever growing secrets especially from Sessho-maru's mate Sachiko. But how long can she hold out before those secrets destroy her and everything she holds dear? 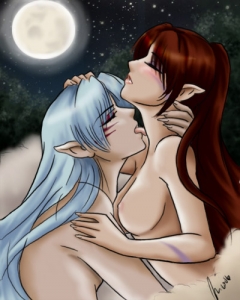 Sunlight filtered in through the window, drifting across Fawks’ face. She opened her eyes, blinking against it as Sessho-maru rose from the bed. She watched him stretch and a small smile tugged at her lips, at times like this, she was utterly at peace. In the few hours spent with him, she could pretend everything was alright, she could forget the world and just be his woman.

Sessho-maru pulled on a robe, “You should go, I’m sure Tensei will be looking for you…”

And just like that the illusion was shattered, Fawks sat up, tucking the sheet to her chest. “Yes, my lord. I will be ready in a moment…”

She was unsteady on her feet, Sessho-maru caught her as she stumbled but she shoved him away. Now that their time together was over, she didn’t want him treating her like a lover.

“…I was too rough with you…” he commented.

“I’m fine” she snapped, pulling on her own yukata. “Shouldn’t you be off, my lord? I’m sure your mate and son are wondering where you are”

Sessho-maru didn’t even flinch at the barb, it seemed he had come to terms with what they were doing better then Fawks had. Maybe it was a demon thing she didn’t understand yet. Fawks cinched her robe shut, turning to go, she needed to bathe, to rid herself of his scent and touch. To forget about him until the next time, and there would be a next time. He said nothing as she left and for that Fawks was grateful.

Itnasha met her in the hallway, his expression unreadable. She didn’t meet his eyes, didn’t stop as she continued on her way to the bathhouse.

“Nothing…I was just thinking about what a faithless mate you are…” he said, easily following her stride.

It was all an act, a ploy devised by Sessho-maru to keep her close, to keep anyone from suspecting what was really going on between them.

“But everyone believes you are, so it would be best if you didn’t sneak around to another man’s chambers in the middle of the night” he warned grabbing her arm. Fawks pulled out of his grasp, snarling, “Tell that to your cousin. He summoned me so I had to go”

Itnasha glared at her, “If you refused him he’d leave you alone, you know that. You don’t have to stay here, Sessho-maru would let you go if you asked it of him…”

“And where would we go? I can’t go back to my own time, not with the way I am now…not with Tensei…” Fawks sighed wearily, “And if I stayed here in the past with her, she’d never be safe. It wouldn’t take people long to figure out who her father really is, there would be a target on our backs. It’s hard enough trying to keep the truth from Lady Sachiko as it is…”

Itnasha sighed, and she turned from him again.

“Tensei…she calls me ‘papa’ you know…” he sighed.

“Let her keep thinking that…” Fawks threw over her shoulder as she left him.

After her bath, Fawks went out to the servant’s quarters.

“And with such a young child to look after, one would think her mate would at least complain…!”

Fawks glimpse several servant’s children playing with a spinning top, one of them looked back at her, “Ten-chan, your ma’s here…!”

The little girl poked her head up, her golden green eyes flashing, “Mommy!”

Fawks opened her arms as the child ran to her, scooping her up as she wrapped her tiny arms around her neck.

“Good morning, Tensei, did you sleep well?” Fawks beamed at her.

The child nodded energetically, “Papa kept me company, but I missed mommy”

“Did Lord Sessho-maru have a hard time sleeping?” Tensei blinked.

“Kaku-chan says that Lord Sessho-maru can’t sleep and so he makes you keep him company. Why doesn’t he just get Lady Sachiko to do it?” Tensei pouted. Fawks smiled softly, smoothing back the girl’s strawberry blonde hair.

“I’m part of Lord Sessho-maru’s main guard. It’s my job to protect him…”

“Why can’t papa or uncle Gin or uncle Mame do it?”

“Uncle Ginzo and uncle Mamezou looks after Lady Sachiko and the little lordship. Your papa and I take turns guarding Lord Sessho-maru when he has to work late…” Tensei looked like she was about to say more but she didn’t, instead she leaned her head into her mother’s neck. Fawks said nothing, holding her daughter close to her. Tensei was at that age where she asked a lot of questions but she always seemed to stop when it came to the difficult ones.

“Let’s go get some breakfast, ne?” Fawks began. Tensei nodded and she kissed the child’s cheek.

Grin I wrote this poem few hours after my car accident... The worst-case scenario...
Strangers When We Meet Dr. Kiriko returns from the war a different man, and falls in love with his sister who has become...