Modern AU; Roy goes to check out the new act at a local club. 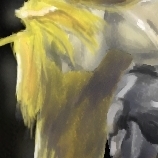 Roy had been hearing the buzz for weeks. Everyone in the business was talking about some new act at The Serpent, some guy going by the name Fullmetal who was really bringing in the crowds.

Curiosity was eating at him. So one Friday night when his schedule wasn't too dense, he stopped by The Serpent to see if this Fullmetal really was as good as he was being built up to be.

He picked a table with a good view of the stage; close enough to leave tips, but not so close that the dancers were in his face. Some were into that, but when Roy came to this kind of place he wanted a performance, not a lap-dance.

The night was drawing to a close. The acts so far had been good, but not exceptional. Roy couldn't say he wasn't enjoying himself; between work and classes he'd been pushing far too hard lately, and he appreciated the night off. But he was still waiting to be wowed.

One more act to go. Judging by the excitement in the crowd, this had to be the guy.

The music started; a techno with a solid beat, and with it then the dancer strutted onto the stage. The crowd was delighted.

He certainly made a striking presentation: leather pants, a black jacket that opened to show a muscle-hugging black tank, and a mane of the most striking gold hair Roy had ever seen. But the kid looked to be barely legal, and was quite . . . compact.

Something about him seemed familiar. Before Roy could put his finger on it, Fullmetal grinned at the audience, and began to gyrate to the music.

The pants must be custom made, because they weren't restricting his movement at all. At the very least they were extremely well fitting, and very—for lack of a better word—flattering.

That kid has an ass and he knows how to use it, is what Hughes would say, if Hughes still came to these sorts of venues. (Married life must be so dull.)

The next moment found Roy thinking that those leather pants must be painted on, because kid slid down into the splits. He started on an impressive series of moves that ended with him doing a flip—from the floor—landing squarely on his feet.

The jacket had been shed sometime during the contortions. His right arm gleamed in the harsh lights; That explained the stage name. Roy didn't know much about automail, but this looked elegant.

He launched into another series of moves that looked like they might be based on martial arts, or maybe gymnastics. Definitely optimized to show off his physique. He shucked the black tank top, spinning it in a graceful arc over his head before launching it into the crowd. He grinned and winked, eating up the reaction.

He shimmied out of the pants so fast that they had to have hidden fasteners. These he kicked upstage, turning his back and treating everyone to some delightful moves with that exquisite ass, clad now in nothing more than a g-string. The presence of two artificial limbs only added to his allure.

In an instant his muscles bunched and he launched himself into a backflip, landing on his hands and then flipping back to his feet only to launch himself again. He twisted mid-flight and caught one of the poles set into the stage, spinning around gracefully before wrapping his limbs around it, presenting the audience with a rare moment of stillness. His cheeky smile promised that he was only getting started.

Then, on beat, he swung his body out perpendicular to the pole.

From that moment on, it was as if he'd given gravity due consideration and decided that it didn't fit his style.

Roy realized he'd has his drink half-raised for the last several minutes and deliberately set it down. He couldn't take his eyes off this contorting, twisting specimen of beauty and strength. Fullmetal fed off the crowd, flashing smirks and grins and teasing them with suggestive poses and gyrations and impossible looking moves. Several times Roy found himself thinking that the laws of physics and biology just shouldn't allow that, but the kid pulled it off, each time making it look effortless. It was enthralling.

By the time the music wound down and he lowered himself onto the stage, a good portion of Roy's money was on the stage along with everyone else's.

It was no wonder The Serpent placed this kid at the end of the night; after a show like that, anything else would pale in comparison.

Roy took a moment to finish his drink. After a brief consideration, he pulled out his phone and texted Show was amazing to his best friend. Who had probably gone to bed a couple hours ago, but Roy wasn't above waking him up.

He must not have been asleep yet, because less than a minute later he got back Fullmetal guy was as good as rumored?

Better. Then, because he could never resist, You need to come see this.

To which he got back an emphatic MARRIED.

Truth was, Gracia would be fine with it. But for Hughes married was MARRIED and that was the end of it. (For now; Roy had not given up all hope.)

The club was wanting to close its doors, so Roy gathered up his coat and left them to it.

Outside, a figure standing under the bus stop lamp caught his eye. He was wearing faded jeans and a baggy hoodie, with all that gorgeous hair tucked under a red cap, but Roy wasn't about to mistake him. He laughed softly to himself, finally realizing where he knew him from.

"Hey," he said as he approached. "I've seen you around the university, haven't I?"

The kid looked up from his book to give him the stink-eye, no doubt thinking he was one of those customers, the ones who wouldn't accept that services ended when the club doors closed.

Roy stopped several feet away in deference. "Plant terrace on the left side of the library entrance," he elaborated. "Tuesday and Thursday afternoons."

His expression thawed enough to allow a bit of a smile. "Yeah, that's kinda my spot. I'm in biochemistry so most of my classes are nearby." He flicked the book toward the club. "Grad school doesn't pay for itself."

This close he could see just how stunningly gold the kid's eyes were. A human being just shouldn't be that beautiful, it shouldn't be possible. "I'm jealous, the sciences were my first love. My bachelor's was in chemistry."

"And now?" He seemed interested in spite of himself.

"Well," he made a vague gesture. "Life happens, I guess." He had no desire to get into his sordid past, not while he was still in such good spirits. "You were amazing, by the way. The show was incredible."

Fullmetal grinned, tapping his book against his chin. "Oh yeah?" he drawled, "I just might have gotten that hint from the enormous tip you left."

Roy smirked back. "I'm a firm believer in supporting the arts."

He shrugged, still grinning. "You know where to find me."