Brothers and Sisters In Arms - Chapter 1

Brothers and Sisters In Arms 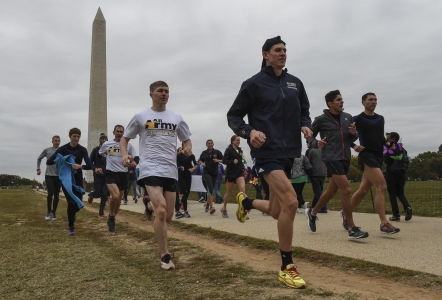 It was a dark and stormy night in the mountains of Italy, getting drenched by rain pouring as much as possible against them. All of the troops were either sleeping on rocks or patrolling the area for enemies. Sergeant Baker was called to action as he was sleeping on a rock. He woke up, going to his brothers in arms. “What is it Corporal?” Baker asked. Corporal Dixon explained everything to him, telling him where the enemies were attacking from. Baker nodded and ran to cover, getting his team rounded up for action. When Baker saw enemy movement, he ordered his team to outflank the enemies in the murky grass and mud, ordering his troops silently to camouflage themselves with mud on their faces.

Without warning, Sergeant Major Johnson had gotten shot by the enemy. He was crying out for help when Lieutenant James Marsh heard the cry. He ran over to Sergeant Major Johnson and took him back to the hiding area, healing up his wounds the best he could. Baker saw the perfect opportunity to flank the German infantry, so he took his chances and ran to the left, hiding behind nearby barrels and wagons, killing the German enemies.

He heard bombers coming over, and ran to hide with his team in a foxhole. Lieutenant Marsh had taken the most damage. He lost an arm in the bombing, and had to be taken to the medical field immediately. Corporal Paddock took Lieutenant Marsh’s place in the war. Corporal Paddock had brought extra supplies to the team, helping everyone out. They all ran for safety as a Panzer IV was after them. Baker had called for backup fire by this time, making sure none of his men were killed in the process of retreating. Dixon hid behind a wall, holding a bazooka in his arms, aiming it at the tank. Private Dean Winchell was told to cover Dixon with covering fire to the enemies as he was setting up to destroy the tank.

By the time Dixon was ready to fire, back up arrived and destroyed the Panzer IV, killing every German around it, who were out in the open snow-filled field.. Baker called his team to regroup, taking them to the tank. “Thanks boys. We needed help with that Panzer IV before it killed us,” Baker said. Corporal Jacob Campbell nodded his head and ordered his men to move out. Dixon shook his head. “Damn it, I was going to destroy the tank but they got here quicker than I expected.” “You gotta deal with it soldier!” Baker yelled as more incoming fire was hitting near them.

*time jump into the future far after WW2 ended*

Bailey went to her father's funeral, sad that he passed away so quickly. She went to the nursing home to check on her mother, Kate, who had gotten very ill. Kate didn't have long to live, and Bailey was trying her best to help every veteran out, as she was a caretaker for the elderly at the time when her father came back home from war. She worked hard, visiting her mom every day, holding her hand, praying for her to life even longer, hoping to tell her mom her final goodbyes.

Kate liked whenever Bailey visited her, as that was her only loved one left. It wasn't long after Jared's death that Kate had passed away as well. Bailey had planned for the funeral ahead of time, feeling bad for her two girls, Claudia and Jamie. They were only 5 years old, both in pre-school now, unable to meet their grandparents, seeing as Jared and Kate loved their grandchildren to death, along with their daughters, Bailey and Amber, though Amber wasn’t active in life like Bailey was.

Bailey and her husband, Blake, went to check on Claudia and Jamie every day during pre-school. Blake was working extra hours to earn more money to support the family. Bailey was still having a hard time dealing with the death of her parents, seeing as they passed away way too quickly for her. She missed her parents every day, that she would pray to God that they would watch over her during her lifetime, and take care of her and her children, even her boyfriend, Blake.

The day of the funeral, Bailey and Blake were dressed up, getting Claudia and Jamie dressed up. Bailey drove to the funeral home to see her mother's body a final time, saying goodbye to her only parent left, seeing as her mother was dressed in a formal attire, wearing a nice clean dress, the same one she wore when she first met Jacob, before they later got married, before he got deployed overseas.

After the funeral, Bailey stayed back to get her mother's flag from her father's CO. Blake had taken the girls out to eat while waiting on Bailey. Claudia was making a mess with her food while Jamie was keeping herself from making a mess as Blake fed her. Blake just smiled at both of his girls, loving how sweet they were and how adorable they are.

Once Bailey had finished up at the funeral home, she went to see Blake, Jamie, and Claudia, smiling at them weakly. She sat next to Blake and sighed. "I'm gonna miss them, Blake." Blake rubbed Bailey's back. "I know you are. I know how it feels to lose family this quickly from war," Blake said, as he, too, lost his parents to war, including the rest of his family, except his only brother, Axel, who he hasn’t seen since he’s taken time off from work to be with Bailey.

Blake drove the girls home, putting Claudia and Jamie to bed once inside the house. Bailey sat in the living room, looking at pictures of her father and her mother. Blake sat beside her and smiled. "They are great people, you know," Blake said. Bailey just nodded her head and kissed him. "Blake, can we go to bed now? I feel very tired after crying all day." Blake nodded and carried Bailey to bed, adventures awaiting them the very next day.

Revenge Harry, angry with Cho, decides to get back at her in the worst possible way. The darker and more...

Sweet Black Harry finally gets what he wants after the war.