Another response to the episodes of Grey'S anatomy. XD Faeyl's and Shifters Are to ME. 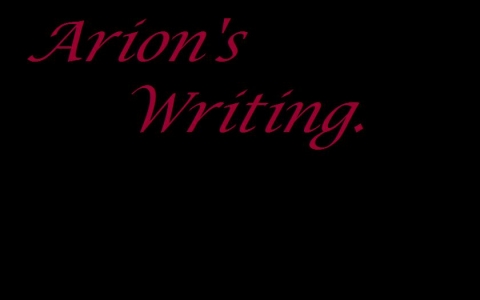 The ships sails flapped in the cold air, playing with his hair. He stood out on the very edge of the stern, watching the cottony clouds fly pass them. His cloak flying out with the wind. The were flying, the sun guiding the way with golden rays. This was life, heading out into the unknown, travelling anywhere on a whim. This was his life. He watched the bird fly towards him, having its call catch his attention. He held out his arm and the hawk landed, gently gripping his arm with its talons.
"Fea, Oaicilmoon, find anything interesting?" The hawk nibbled on his shirt before hopping down on to the railing. He jumped back down and headed back towards the steering wheel, where a giant man, with a peg leg and a mechanical arm and an eye patch stood. A long redo range beard was pulled into a pony tail as he kept having to rescue his three cornered hat.
"How’s that weather, boy?" he growled in a friendly tone.
"So far it's clear skies, a few turbulent areas, but we didn't catch any sign of a storm." he called back up standing on the deck, looking up at him.
"Never caught your name." The captain called back down.
"Names Cyndol," He yelled back up at him, "And there, the hawk is Oaicilmoon"
"You won't find any of that stuff here, waters rare-extremely."
"I noticed" He gave a small smile towards the bird who now sat up on one of the masts. The ships crew mates were busy adjusting sails, cleaning and doing everything that a ship needed to have done. They yelled at each other in a language he barely understood but he didn't bother to try and translate. Some of the crew could understand him when he spoke in the silber tongue, but the captain was the only one he could talk to. He wasn't sure what language they were speaking and he didn’t want to find out.
"What brought you here?"
"I'm supposed to find someone in the major port city. I ended up into the wrong city. My thanks for allowing me to travel along."
"You've never been here before, I assume?"
"Nope, It's a good thing some know the silber tongue."
"You got luck this time, but I reckon the next time, ya' wo' find anyone to help" He laughed a bit at this.
"I supposed you have right there. How long will it take to reach the port?"
"I reckon another week, if the skies stay clear like this." Cynddl nodded and stretched. "Lunch is about an hour, feel free to do what you want." Cynddl gave him another nod before he headed off towards the stern, the hawk following.

(PL) "I feel like He's planning something, like we shouldn’t have trusted him, moon" He said staring down over the railing. Watching the barely visible landscape passing under them. The hawk only nuzzled against him. He smiled, pulling out a small pouch; he opened it and dug through it, soon finding some crackers. Putting the pouch away, he fed the bird the crackers. (PL) "We'll just have to be careful on what information we give him, best be wise not to tell him I'm a faeyl if he doesn't know already..." He only watched the hawk nibble on the crackers held between his talons. He fell silent letting the wind play around them.
He nearly jumped when the bell rang for lunch. It was a loud deep tone that nobody could ignore. He pushed off the railing and headed down towards the mess hall, the hawk perched on his shoulder. (PL) "I know it'd be easier for you to shift, but it’s safer not too." He whispered noting the tension from the shifter. "I think it may have been easier to choose a smaller creature" He found a seat next to the captain, holding back the shivers from the crowd that had squeezed in the smaller room. How he hated being crowded.
(ST)"So, who are you looking for?" The captain asked, serving him soup, bread and some sort of meat. He also poured him some wine.
"An old friend. He went missing a few months back. I'm off to go see what's become of him." he replied, easily switching back into the silber tongue. The captain nodded.
"Aye, its seems as if everyone’s gone missn' been hearing about it everywhere, mainly from different worlds ya' see, but the strange thing is, no one ever sees or hears or find them ever again." He replied, taking a swig from his own drink. "I say, it'd be those blasted Faeyls, always hoppin from world to world, somehow they seem nutty, and they're the most likely candidates, one minute there, the next gone to who knows where, since they are the only ones able to 'hop'" He continued to eat. Cynddl took a bite of the meat, not knowing what he should say.
"I'm...sorry you feel that way. I mean, it's reasonable, but there are other logical explanations on why people are disappearing."
"Are...you...a faeyl?" the captian suddenly asked, a dark look crossing his face.
"No, but I know a friend who is one, that's how I ended up here. The friend that I’m searching for is also one. “The captain relaxed and laughed.
"Well, ya haven't turned nutty yet!" he said patting him on the back hard a couple of times. "We'll get you straight by the time we get back to port!"
"Look forward to it. „Was all he could say not sure what else he was supposed to say?

He was back at the stern, leaning against the railing, the shifter next to him, and his bird head tucked underneath his wing, asleep. The moon was high and full. The wind was only a breeze and no longer strong as what he had been. (PL)"I wonder what he has against Faeyls." He brooded softly stroking the birds’ feathers. The bird made no noise as he did so, only continuing to sleep. "Some people have interesting views on us" He sighed and continued to gaze over the night’s sky. "To think! We are so close to the stars, yet so far away." he laughed softly, still gazing up at the blue moon. The world was silent. Until the hawk gave a giant squawk and before he could even turn around, the world swam before him.
He felt like he was floating, drifting in and about this nothingness. He couldn't breath. He struggled, helplessly, instinct taking over as he struggled; now watching the bubbles rising as the air he had left was replaced by water. he continued to struggle, soon no longer able to find the strength to head for the surface, he continued to sink, his eyes watching the ever so near yet far away sun shine that, if only he had the strength, would be his rescuer. He was only to lose consciousness again, never to wake up; he would fall to rest at the bottom of this vastness of water. He knew someone had kidnapped him and hopped him, because where he had been travelling, had no water...
There were so many things he had wanted to say to all those people he would never get to see again. Images of his mother, his father flashed behind his fluttering eyelids. He had had a fight with his mother; he couldn’t have gone back once to apologize, even when he wanted to, there were so many things he hadn't gotten to tell her. His father, who would have always welcomed him back. He didn't go; he hadn't been back in months, almost a year. He kept meaning to, but he hadn't, he wasn't going to make excuses. He should have but here he was....
his friends who were always there for him, eve if he did stupid things. He hadn't even gotten to re-visit those he hadn't even seen in years. His shifter, who he hoped was still of the living and would continue on even if he felt like he couldn't. All those images.
Of course the last hurt, the image of the one he had loved, and still did, always doing the radical things Faeyls would never do, always more trusting than he should have been. He hadn't seen him in years, they had parted, the reason now, was unknown to him, but now he wished that he could have gone looking for him... he should have...
There were so many things he should have done, he was dying in regret, things he would never do again, things he had wanted to do. He held the image of his love, and a light soon greeted him, the light was so warm, so comforting, like an old friend. A hand reached for his and he reached out and took it, no one there to ever find him as his body hit the floor of the deep water, and he, the should, was carried off to somewhere else, where he was welcomed.