Realm of the Hyumn - Chapter 1

Weyuri, a species that belong to a world known as Imbrogli, were never supposed to come to the human realm--or Earth, as they call it. 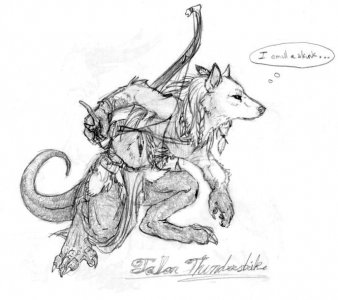 Azure and crimson flames licked at the frozen night air, its dance reflected within crimson eyes. Dew gently shimmered against fur in silent play, unnoticed droplets soaking into wrist and ankle bandages. Around, dusting and new fallen snow shimmered in the fire light's glare, dreary gray clouds floating overhead. Aside from this, nothing else decorated the land. Not even the winter tree or sparse frozen grass.

Lifting a thin stick from the icy ground, the figure used it to stoke the dwindling bonfire. However, even it was not on his side, dying with a puff of smoke. Without its light or that of the moon, sight became poorer and once-seen beasts became insubstantial shadows. Glancing around, trying to find one of these creatures of night, he drew in on himself and wrapped his arms around his chest, gently rubbing the uncovered fur. Milky white underbelly with a generous shading of blood red and beige stuck out worse than a bloated stomach.

Swallowing, the freezing temperature slowly began to pull against his consciousness. Like most, he knew that falling asleep in winter wastelands such as this would mean death. But the irresistible tug became too insistent, seemingly intent upon drawing him into the unseen abyss.

With a gentle sigh, he finally let go of awareness and lay back against the sweetly cruel ice. The snow had melted and then frozen over from the once-brilliant fire, acting as a faint cushion. With the promise of either a long, never-ending dream or a quick death, he lay there with the faintest of grins on his muzzle. Sweet dreams and ever-lasting darkness. Not so bad a fate...

Why am I always stuck with the sucky tasks? I can do so much better than this! C'mon, at least TRY and put my talents to use, will ya?! Licking her lips, she looked over the original drawings of the city. Red circles marked problematic areas where guardians, mercenaries and the every-day assassins were especially heavy. Blue for perfect hiding spaces--such as underneath a low desk or table. Green was going to be used for waypoints. Just in case she needed to restock any of her supplies quickly. Lastly--in her favorite color no less--black for the target mark.

Of course, this is only a minor run. The thought ground through her mind, piercing with a sharp blade. All they wanted was for her to trick the guard into thinking she was one of their own. Then to go inside the coffee shop, look over the painting and find the code, then take the goods and do the same thing four more times. What was of interest in those vaults was hardly anything even worth 'significance'. "The only thing he keeps in there is some silly little diamonds the size of my thumb. Who cares? You can find those on the black market easily now a day." After all, some 'genius' by the name of Aron Taylor Jones figured out how to create fake diamonds that were able to pass the most rigorous of a jewelers tests. How could there be any point in stealing some from the vaults of Thadeus Koslowski--"Oh, I get it. Now I feel stupid."

Rubbing a clawed thumb against her cheek, she slowly allowed her breath to ease out in a quiet sigh. Below, a guardian passed with his flashlight swinging, shined black shoes clicking against the cement ground. For a moment, he stopped and the light shone up at her hiding place, perched on the roof. Unfortunate for him, she knew how to hide in the night well--even though her fur coloration stood against her in that matter.

With a whistle and an over-exaggerated huff, he continued. As far as he knew, there was no one out to torment tonight. "Well. That was anti-climatic. Mind if I throw a rock at your head? That should add some spice to this dull night. But no-o-o. We have to be the boring type and follow the rules!"

Rolling her eyes, she gathered up the charts, diagrams and blueprints in one swipe before leaping off the rooftop and landing, gently, on the steel divider between the wires. Amid every home, large enough to hold more than three families, these neat separators made the perfect landing for any thief. "Now, let's get this job over with so I can go home and get at least a wink of sleep. Nine bells should be fine..."