The Sea and the Wolf - Chapter 1

The Sea and the Wolf

One cursed man, one woman he must save, one destiny. Just roast me with Critique 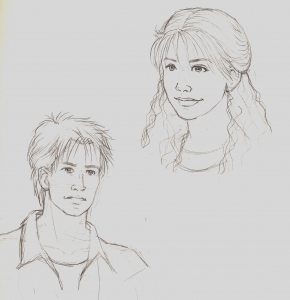 His amber eyes studied the landscape all around him. The plains before him were bare because all the farming was done for the year. Every vegetable was picked, packed and ready to be shipped to the city at any time. A pouch of coins in his pocket jingled as he moved, walking across the fields back to the little house. Three women stood outside, and each of them smiled as he neared. Upon meeting them, he too smiled and pulled the pouch out of his pocket, giving the pouch to the oldest woman. Her smile was kind, and in return she leaned down, kissing him on the cheek. Her soft lips pressed against his skin, warming him from the inside out. She pulled away, smiling directly at him. Her gentle amber eyes watching him, her long black hair was tied back in a long pony tail. The two women who joined her were identical in appearance, seemingly down to every detail. Both had the same black long locks as the older woman, and the same amber eyes that all of them possessed.

“I've never been so proud of you Conan. You took care of everything yourself,” she smiled, her hand caressing his soft young cheek. “A mother couldn't be prouder.”

“We're proud of you too Conan,” one of them cheered, taking the boy completely into her arms, lifting him fully into her arms. “No one has ever had such an amazing little brother.”

He laughed, putting his arms around his sister, embracing her tightly. A broad smile was painted on his small mouth as he hugged her, while his mother and other sibling watched.

“Let's get inside Conan, it is getting cold out, and we have yet to celebrate your success on the farm with dinner,” his mother had a proud smile clearly visible on her lips.

He was alone in the one room farm house. So small, it only consisted of a tiny kitchen with a fireplace, a table, and a few beds of hay off to one corner. The air was stained with the smell of burnt stew that had been cooking far too long on the fire, but with something else as well. The air also had a rotten smell, so sharp that hit it Conan's nostrils hard. That was not what bothered him the most, but it was rather the still forms that lay in front of him. His body shook violently, while his face was wet with tears. He whispered each of their names just loud enough for everyone in the room to hear.

“Bridget...Caitlyn...mother,” he called out, but no one in the room moved, only his trembling body. He sniffled a few times before his eyes were drawn to a tall figure that had been was watching him. The figure had been quiet, but it had been watching the child carefully. Conan hadn't forgotten they were there. He began to sob harder as he saw that they were coming towards him. They were taking their time, stepping over the bodies like they were just bumps in the road. The little light in the fireplace gave off only a little light, but as they came closer to Conan, it was more than enough to show him what they looked like. At his first full glance at them he became more frightened and cried out.

As the figure came closer, Conan recognized that it was a rather hairy woman who was gazing down at him with fascination. Her body had a very feminine hourglass shape, and she wore a white dress, with a very fresh large red blood stain on the front. The rest of the dress was covered in blood splatter, in small and large speckles.The woman’s body appeared to be dark skinned, but a closer look revealed she was not a woman of color, but that she was covered in brown fur, that completely covered her body. Her long chocolate brown hair trailed down her back, much like a mane on a wild animal. Her nails looked much more like claws rather than long human fingernails, and were black, like a canine's. Her nose seemed to be darker and even shaped differently, reminding him even more of a wild wolf.

“Do you know what I am?” she asked. She bent down on her knees, so she was eye level with Conan.

“A beast,” Conan shot back. His mahogany eyes seemed a lot darker in the firelight, and surprised the woman for a moment. She backed away as he continued. “A hell-hound, sent from Satan.”

The dog-like woman leaned forward again, reaching with her clawed hand and caressed his red cheeks, wiping away a few tears. He snapped back, slapping her hand away. The woman growled and bared her fangs as she used her quick reflexes to take him by the throat, choking Conan and pinning him in place.

“No one sent me child. I am as much of a woman as your mother was before I killed her. I am almost as young as your sisters were before I bathed in their blood. I am fed and I have cleansed myself, yet there is something else I still desire.” Her voice was calm as she continued to hold him by the throat.

He tried to fight her, but her powerful grip held him in place. He clawed at her, but it did not faze her at all, neither did his kicking as he floundered about underneath her.

“I wish for my own pack. I wish to be the Alpha of a group just like me. I wish for you to be the first to join me. You are but a boy now, but one day you could be great. A beast, that even Satan would fear,” she whispered in his ear. Conan's entire body shivered as he felt her hot breath on his neck. And felt even sicker as he felt her touch various parts of his body. He wanted her off of him right then and there. This was disgusting and dirty. He hated everything about this woman. The way she talked, moved and touched him. It all offended him, but even with him showing this clearly with his words and body language, she did not stop. Her fangs ran across his ear lobe and traveled down his throat and then to his collar bone. Her lips trailed back up to the child’s arm, where she opened her mouth, and began to lick one spot. She did so for a few moments, and then looked at the arm with a deep hunger in her eyes.

“Child, this will hurt, but please be strong.” Before he had registered what she said, her fangs were deep in his flesh. He cried out at the top of his lungs as her strong jaw assaulted his arm.

He screamed over and over again, only stopping long enough to take in another deep breath and began to scream again. He fought hard, but her powerful grip did not loosen, leaving Conan in a panicked state.The woman stopped, releasing her fangs from the child's arm.She returned to lick his swollen and bleeding wound. She released him and moved back away from his body. He lay, stunned and unsure what to do now, tears falling from his eyes once again.

“Don’t worry child, come next full moon you shall not fear anything anymore, and you shall have the power to do and take all that you desire,” she whispered. “Young child, do tell me your name.”

The woman stood, looking over at his families’ bodies, curiously studying the remains.

The woman began to chuckle.

“A name that means little wolf? How befitting. My name is Seath.” Conan sat up, now examining his arm. It was bleeding a lot, but the pain was slowly easing away to the point where it did not hurt anymore. Seath stepped toward him again, examining the wound for herself. Conan tried to pull away, but Seath’s strength again held him in his place. A deep laugh escaped her lips as her face lit up, excited at what she was seeing.

“Your body is already changing; you’re even more extraordinary than I originally thought. With the gift I have given you, your body will heal all the faster, you will be a faster runner, stronger and have bravery no human could ever have. Not to mention your life span will be longer.” Conan felt his eyes begin to water and felt the hot sensation of tears fall down his cheeks once again.

Conan stood, his small body stood tall, much like a mighty warrior. His brown eyes became angry as he stared at Seath.

“You took them away!” Conan shouted.

Seath crossed her arms, clearly not impressed by his outbreak. She took a step forward and reached out towards him. Conan’s eyes flared red and a powerful growl escaped his lips as he took a swing at Seath. He put all his weight and muscle into the blow, forcing her to the ground. She was only on the ground for a moment before she jumped up to defend herself, her eyes flaring red as well. As she searched around for the child, there was no one there; just the remains of her victims. The child had disappeared. She searched around, and began to sniff at the air, trying to pick up the scent. All that filled her nose was the smell of death from the family she had slaughtered. She frowned for a moment, stepped away from the bodies, and headed towards the small house's entrance. She pushed the still swinging door open and peered outside, a smile crossing her lips.

“You can’t run from it forever Conan. One day you will be battling the loneliness, and you will become part of my pack,” Seath continued to smiled. “One day.”

A D&D Poem Something I felt like doing. This is my first poem so hope you all enjoy. For those of you who...

Raditz and Company Raditz, Nappa, and Vegeta travel to earth to look for a guy named kakarot... But end up on the...