Whether you're a Writer looking to check your work or a Beta Reader who wants to point out a few things to your favorite writer, feel free to borrow, spindle, and mutilate this list of questions to your heart's desire. 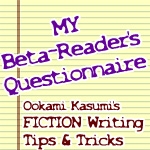 Have you hugged your Beta Reader today?

Anyone who writes with the intent to be read by the public, from the brand-name published authors to the fan-fiction scribbler, will tell you that a good Beta Reader is worth their weight in GOLD.

So, what is a Beta Reader really for?

Most Beta Readers look for obvious grammar boo-boos and glaring spelling errors, but the really good ones look at your story as a whole and tell you where your strengths and weaknesses are so you can adjust them.

These are what I ask MY Beta readers to check.

Whether you’re a Writer looking to check your work or a Beta Reader who wants to point out a few things to your favorite writer, feel free to borrow, spindle, and mutilate this list of questions to your heart’s desire.

Did you Get it?

Do the scenes FLOW?

Is anything VISUALLY Confusing?

Did the Characters WORK?

The answers to these burning questions will keep your fiction crisp, focused and Popular. If your Beta readers liked it then loads of other people will too.

(I still think that if George Lucas had used a few test readers for those last three Star Wars movies, the scenes with Aniken as a child would have been much shorter - and made more sense. Jar Jar Binks would never have appeared. The romance between Aniken and Amidala would have been a Romance, and the clone war would have been a frikkin Clone War. But that’s just MY opinion...)

Ame no Yume flash fiction genre, emphasizing objectivity and distinct characteristics of a scene existing in...
Waiting Again old poem and this one is how i feel when i'l waiting for something or someone to come