The sun has yet to set, but it doesn't matter. As cloudy as the sky is outside it won't be long until my captor finds me..even though it's "daytime." I thought I could run away, but as dark as it is outside...a vampire will have no trouble finding me. 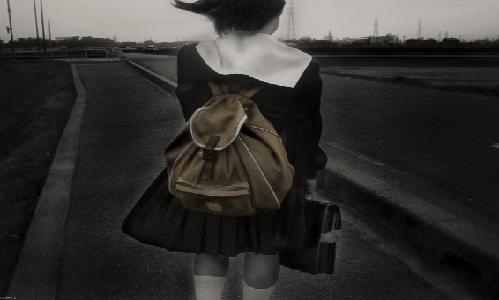 I dared to glance upwards though I knew what was above me, decayed splintering wood and blackening rain clouds loomed over my drenched head. The roof of the house was sunken and patches provided partial protection from the treacherous rain that was bent on pelting anything in its path. It didn’t help that the walls of the house were stone and added to the gloomy feelings that were welling inside my chest, adding to my anxiety was the knowledge that as dark as it was he could easily find me even though the sun had yet to set.

Curling up into a tighter ball I rubbed my eyes against my soaked jeans, though I knew it wouldn’t help disguise my tear streaked face. It was only a matter of time before he found me and once he did life would cease to exist. A sob echoed through the empty abandoned house I jumped immediately looking around for an intruder, there was none. Hugging my knees tighter against my chest a shudder shot through my body. I whimpered another sob that echoed through the house. Cold wet arms encircled my waist forcing me out of fetal position and into an awkward slump like a rag doll. The firm hold on my ribcage hauled me up to my feet, I whined but didn’t resist as I was being dragged away from my hiding place.

My captor didn’t say a word or look at me as he threw me over his shoulder and walked stiffly away. The rain didn’t seem to bother him as he stepped out and into the world, even though staying inside the house wasn’t much different from outside in the yard.

“I’ve been looking for you.” A deep voice spoke harshly. It was plain to see that he had been looking for me, his clothes were drenched and his body was colder than usual. “Do not run away again.” His voice was final.

“I have no commitments with you.” I replied in as much of a cold and harsh tone as my voice would allow. The hold on my legs tightened and slung me forward my body crashed to the pavement. I cried out despite myself as pain rippled through my shocked back.

“No commitments! That’s what you say?! After all of this.. that is all you can say!” Blake’s face enflamed with rage. His choppy black hair hung wet in his face half covering his pale green eyes. His young face clouded as he locked gazes with my eyes. My body was limp; I wished desperately to take back those words. Pain was evident in his eyes. His right hand reached into the pocket of his long black coat and he took out a tiny velvet purple box. He flipped the top of the box violently squinting his pale eyes as if he were fighting back tears. He tore a small object from the box and threw the sparkling thing directly into my chest. I winced.

“Yes.” He said flatly then spun around on his heels and strode away quickly. I picked up the thing weighing heavy on my breasts and studied it. It was a small silver ring studded with tiny diamonds. Curling up into a tight ball I fought the urge to cry. He proposed and broke the engagement in the same moment.

One Piece PETs: Shake it Out In my headcanon, Robin would be a huge Florence + The Machine fan. Their music would really speak...
Everyday Passion Everyday he wants her, everyday he waits... now, he will wait no longer.