It was suppose to be some innocent fun for Rin. Kagome would soon realize that giving Rin the bag goodies soon became one of the best things she had ever done. In reply to the Torture Sesshoumaru challenge. 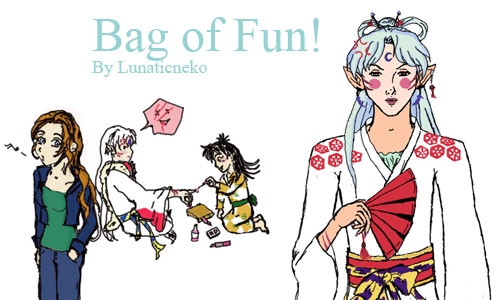 AN: This really was inspired from a few things….which spiraled into this. First I was testing my tablet out in PS and wanted to draw a chibi me, then I wanted to put annoyed Sess in the background….but what to do to him. Then came the nail polish. Originally I was going to put Kagome in it, but Rin seemed more suiting. Then the bag of fun appeared. I felt inspired to write it, and remembered the challenge I saw people posting to. Given this has probably been done. But it was really for my own amusement, but I hope it amuses you too.

If it does, please leave a review.

Kagome tried to hold in a snicker. Really she tried, but then Sesshoumaru turned to glare at her, and it was her undoing. Of course this only made him narrow his eyes further, and….

`Is he pouting?' The muffled laughs breaking free again, as she stared at his fuchsia lips.

Jaken was laying unconscious in the grass a little ways a way. He had returned to camp from gathering firewood and upon seeing his lord made a weird choking sound. Shortly after the branches slipped from his grasp and he was out cold.

`Brain must have seized on him.' Kagome mused.

It really was all her fault. She had brought Rin a bag of make up for dress up. Secretly hoping she use it against the noisy toad. But she didn't, and the miko couldn't say she was disappointed. Besides it wasn't everyday you get to see a taiyoukai made up to look like a drag queen.

Rin was put away the blush she had generously used on her lord, and was now examining two bottles of nail polish. She eyed them closely before setting down the blue and opening the light pink one. Sesshoumaru left eye twitched, and Kagome`s overflowed with tears of mirth.

He gave her a demanding glare that seemed to say “Help me!” But part of her insisted she couldn't be sure.

Kagome thought a minute. `I should really help him….really…I'd be a bad person not to.' But after a very short mini war between good and evil she shook her head. `Nah! This is too good! Definitely worth the karma. Besides she hasn't even begun with the ribbons.'

Seeing no help was coming soon, Sesshoumaru gave a resigned sigh. Accepting the slow death of his dignity.

LOL, What did you think? If you even got the slightest bit of amusement please review.

Fray On my soul - don't go away.
Radiate empty life Uh, i just letted my mind wander and i writed those things to the paper, this is what it became...