WHO is telling your story -- really? 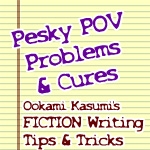 What is: Point of View (POV)?
-- It’s the thoughts and feelings of the person telling the story.
-- First Person: I am telling the story.
-- Second Person. I am telling the story to YOU.
-- Third Person: The story is about him.
-- Close Third Person: He had no clue how he got roped into telling this story, but he was telling it, and by god, they better listen up!
-- Omniscient POV: The camera’s eye view. This is what happened. This uses no internal narration what so ever; you only know what the camera sees. This is the POV used for writing movie scripts.
-- Storyteller’s POV: Author Intrusion: Once upon a time, there was this sweet little boy who didn’t mean any harm. It’s called Author Intrusion because the author intrudes on the story with their opinions on what is happening. The Lemony Snicket books are written this way, as are Fairy Tales and many Japanese novels.

The preferred POV for book and magazine publication in America are First Person POV or Close Third POV.

If Oscar the Grouch is looking at a bed of roses, what is going through his head is not going to resemble what would be going through Big Bird’s head. If you are in Oscar’s POV, the way you would write the description of those roses would reflect how he saw them.

Attitude Alone (AKA - Internal Narration):
~~~~~~~~~~~~~~~
Oscar could not believe that someone had the gall to drop his comfy garbage can in the middle of a disgustingly bright mound of flowers. At least they were roses. He could almost stand something that closely resembled a heaped snarl of barbed wire, if it weren’t for those eye-searing explosions of hideous pink. To make matters worse their stench was overwhelmingly sweet. He just knew that it was going to take a whole week to get the smell out of his can. He seriously considered heaving, just to have something more comforting to smell.
~~~~~~~~~~~~~~

What’s wrong with this snippet?
-- Technically, nothing other than it’s BORING. NOTHING is happening -- and that’s totally wrong for this character. Oscar would not sit there and contemplate the roses; he would make faces and say something snotty.

Attitude + ACTION:
~~~~~~~~~~~~~~~
Oscar the Grouch popped out of his trash can. Serrated green leaves waved among slender and barbed branches around the mouth of his home. He gasped in horror. “What is this disgusting mess?”

He leaned out and looked around in disbelief. "Oh ugh, I'm surrounded. Somebody put my trash can in a revolting pile of... What are these? Roses?” He could almost stand something that closely resembled a heaped snarl of barbed wire, if it weren’t for those eye-searing explosions of hideous color. He curled his lip. “Pink, I hate pink.”

To make matters worse the stench was overwhelmingly sweet.

Not quite so boring this time.

Pet Peeve of mine:
TOO MANY POVs!

Your mileage may vary, but as far as I’m concerned, there is only ONE legitimate reason to have more than one POV:
SUBPLOTS

When you have a large cast of characters, making more than one story thread going on, only then do you need POV switching to show the full scope of the story. Since another story is being told within the first, the main POV character may or may not ever be involved. This makes another POV character a necessity.

Jane Austin, Steven King, Robert Jordan and Terry Pratchet are authors that use multiple subplots – multiple stories within one bigger story, and even they stick to ONE POV per subplot. When they bring all the characters together in a story’s final confrontation, they use the first POV Character (that is not killed by the villain,) that appears in the book.

9 times out of 10, the very first POV character is usually someone dealing with the Antagonist – the villain of the piece, and they usually end up dead. The next POV character is (normally,) the story’s leading Protagonist.

“But if you only use One POV at a time, how will the reader know what’s going on in the other characters’ heads?”

The exact same way YOU know what’s going on in your friends’ heads. You GUESS by reading into what they say and what they do. You read their Body Language. This means that if you want your reader to guess right -- or wrong -- you put in the speaker’s body language too -- what they’re doing AS they speak.

When you have more than One POV character in a scene,
Who’s POV?

Dead Give-Aways:
~~~~~~~~~~~~~~~
1) Every character’s opinionated view is presented without any form of scene breaks, (often in the same paragraph.)

Don’t rush. Handling one POV is tough enough. Seriously, I know a lot of published authors who have a rough time with POV. Taking one step at a time will save you a LOT of grief in the long run.

2) The POV characters are narrowed to only 2 or three people – and they are all involved in ONE plotline.

3) The official lead character does not affect the plot in any major way.

This problem normally takes a very firm publication editor to fix – because the author will often refuse to fix it for any other reason. They did it on purpose and don’t see anything wrong with it.

2) The POV switch happens without breaks, one successive paragraph after the next – from one end of the story to the other. (Him – Her – Him – Her…)

3) Events are often repeated; displayed in one POV and then the other.

4) Its deliberate. The author did it on purpose.


The Author thinks they’re making SUSPENSE.
~~~~~~~~~~~~~~~
The author is convinced that the entire cast MUST be revealed to the reader. The reader spends the rest of the story popping from head to head viewing the Unfolding story. Unfortunately, by POV hopping, peeking into each of the character’s heads, it does not take much effort for the reader to guess how the story will end.

2) The entire plot and every characters’ motivation, including the villain’s, is revealed by the third chapter.

3) Its deliberate. The author did it on purpose.

Think people…!
-- Why should the reader bother continuing to read a story they already know the ending to? (I won’t, that’s for damned sure.)

So? Once the reader knows it’s going to fall apart, the reader is Distanced from the character. They are no longer a Participant inside that character’s skin; they’re an Observer that already knows a surprise is coming -- which of course, RUINS the surprise.

And you do — what? You smile, maybe you laugh.

Someone else leans over and grabs a different kid, yelling: “TICKLE!”

And you…? You jump out of your skin, maybe even shout because it was totally unexpected.

Replace “I” with the Character’s Name at the BEGINNING of a paragraph.
~~~~~~~~~~~~~~~
You only need to use a character’s name once per paragraph -- unless they are directly interacting with another character of the same gender. If so, then you’ll need to use both names to keep the reader from getting confused as to who is doing what to whom. Use 'He / She' everywhere else in the paragraph.

(Need a gender-neutral word? I use THEM or ONE. “He didn’t know what to tell them.” “One needs to be sure before one acts.”)

Once you’ve done your search/replace, reread your story line by line correcting and adjusting as you go until the story reads properly.

In Conclusion…
~~~~~~~~~~~~~~~
Using weird POVs and head-hopping is not that big of a deal when you’re only posting on your LJ or on free sites. Those readers don’t expect perfection, but don’t think they don’t notice. (I most certainly do.)

However, if your dream is to get published you might want to at least be familiar with what is acceptable to an Editor, and what is Not.

Head-hopping and POVs other than First or Third are Not Acceptable.

I am well aware that certain name-brand authors head-hop all the time, Nora Roberts, Anne Rice… How do they get away with it? MONEY. Their editors are not about to challenge their Cash-Cows. They know good and well that their devoted fans will buy their books anyway -- mistakes and all.

Unfortunately, until you become that famous yourself, any professional editor that gets a manuscript rife with head-hopping or in a weird POV will either toss it into the Reject pile, or send it back with so much red ink it’ll look like it’s bleeding.

Guess how I found out?

Enjoy!
~~~~~~~~~~~~~~~~~
DISCLAIMER: As a multi-published author, I have been taught some fairly rigid rules on what is publishable and what is not. If my rather straight-laced (and occasionally snotty,) advice does not suit your creative style, by all means, IGNORE IT.
~~~~~~~~~~~~~~~
Ookami Kasumi
http://ookami-kasumi.livejournal.com/

The Call To Adventure This is my main work, filled with prophesy, witches, fae, and meddling gods. The world is much...

Sweet Serendipity A little poem I made a while back - during the summer, in August, I think