Good 'Deus Ex Machina' only happen when they've been set up to happen all along and were simply overlooked--which means they're not really 'Deus Ex Machina'... --They're actually a 'Chekhov's Gun'. 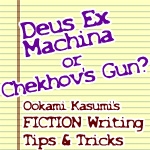 A Deus Ex Machina is when the Hero doesn't find the solution to the story's problem. The solution is handed to them, or taken care of, by someone or something far more powerful.

From TV Tropes:
~~~~~~~~~~~~~
A Deus Ex Machina is an outside force that solves a seemingly unsolvable problem in an extremely unlikely (and, usually, anticlimactic) way. If the secret documents are in Russian, one of the spies suddenly reveals that they learned the language. If the writers have just lost funding, a millionaire suddenly arrives, announces an interest in their movie, and offers all the finances they need to make it. If The Hero is dangling at the edge of a cliff with a villain stepping on his fingers, a flying robot suddenly appears to save him.

The term is Latin for god out of the machine, and has its origins in Greek theater. It refers to situations in which a crane (machine) was used to lower actors or statues playing a god or gods (deus) onto the stage to set things right. It has since come to be used as a general term for any event in which a seemingly fatal plot twist is resolved by an event never foreshadowed or set up.
~~~~~~~~~~~~~

Good Deus Ex Machina only happen when they've been set up to happen all along and were simply overlooked--which means they're not really Deus Ex Machina...

--They're actually a Chekhov's Gun.
~~~~~~~~~~~~~
"If you say in the first chapter that there is a rifle hanging on the wall, in the second or third chapter it absolutely must go off. If it's not going to be fired, it shouldn't be hanging there."
— Playwright Anton Chekhov (From S. Shchukin, Memoirs. 1911.)

Thornton Reed: "Take this, Dag."
Dr. Rick Dagless M.D.: "What is it?"
Thornton Reed: "Something that might come in handy."
— Garth Marenghi's Darkplace, "[i]Scotch Mist"[/i]

"Honestly, what kind of situation would require the use of a pair of fake arms and a remote-controlled wheelchair? Only, I imagine, a completely ludicrous one!"
— Father Ted
~~~~~~~~~~~~~

Example:
~~~~~~~~~~~~~
At the beginning of the horror flick, the sheriff says he's gonna cruise by later that night to keep an eye on the troubled teen watching over the huge creepy mansion--because said teen is known for painting Graffiti.

Back in the big empty house, the radio and the TV blast out "Crazed Killer on the Loose in our area! Be on the look out...! News at Eleven."

Creeped out, the kid calls a few of his friends over to keep him company.

His friends try to get him drunk enough to graffiti the house.

Eventually, the kid decides, "Why the hell not?"

Right at that moment the monster strikes! It terrorizes the troubled teen and kills off his friends. Blood! Guts! Mayhem! Screaming...!

Finally, the monster corners the kid on the roof with no place else to go.

Out of nowhere, a police helicopter shows up to rescue the kid.

The copter door swings open and it's the sheriff. He wasn't just keeping an eye on the kid, he was also watching out for the crazed killer that had been all over the news for days.

-- NOT a Deus Ex Machina -- a Chekhov's Gun! This was set up to happen from the beginning. However, this works even better if....

Before the kid can get up on the copter, the monster finds a way to drag the helicopter down from the sky.

With the judicious use of a can of spray paint and a lighter, the monster's eyeballs are fried goo. The kid makes his escape straight into the REST of the cops heading up the road.

The cops shoot down the crazed killer and the kid goes on National Television saying how Graffiti saved his life. The End
~~~~~~~~~~~~~

An example of a Chekhov's Gun that LOOKS like a Deus Ex Machina can be found in the closing scene to Final Fantasy VII where the heroes tried everything to save the world, but failed. Suddenly, the world saved itself using the Life-stream--the power that had been the focus of the story's main problem since the story's opening. This Deus Ex Machina power had been there from the very beginning, yet had been overlooked making it in fact, a Chekhov's Gun.

However, an even better ending came with Dirge of Cerberus, where one of the least understood characters in the Final Fantasy VII cast proved to have had a monumental power sleeping inside him all along--that was again, overlooked.


Getting it on Paper...
~~~~~~~~~~~~~
If you really want to use a Chekhov's Gun, it helps to think of a story as a Circle. It should End where it Began with the main problem at the beginning of the story being the last problem solved. This means you need to have the Solution to that main problem present at the beginning of the story--preferably in the opening scene, but discounted, or not thought of as anything special.

By the way, most Fairy Tales and Fables tend to have a Circular plot pattern -- ending where they began.

DISCLAIMER: As with all advice, take what you can use and throw out the rest. As a multi-published author, I have been taught some fairly rigid rules on what is publishable and what is not. If my rather straight-laced (and occasionally snotty,) advice does not suit your creative style, by all means, IGNORE IT.