Tane and Kody meet by 'accident'. You never know where life will take you. 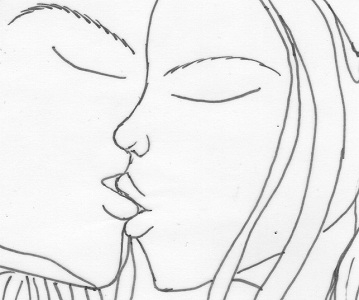 They met by accident... literally. They both happened to be on a bus that was rear-ended by a 4WD.
They were the only people on the bus to be injured enough to go to hospital, so they both went in the one ambulance.
The taller man had broken his left arm and the shorter had broken his right and they had both hit their heads hard enough to warrant a short stay in the hospital. They both ended up in the same room and so of course they got to talking.

"My name's Tane by the way" The taller of the men said once they were settled. His voice was deep and quiet, but it wasn’t a quiet born of shyness, but one of confidence. He knew he would be listened to when he spoke so there was no need to raise his voice.
He had waist length, straight, black hair that seemed to flash with little high-lights of red in the late afternoon light streaming through the window. His bright blue eyes shone with a kindness that made the other man’s heart skip a little.

"I'm Kody" smiled the smaller man "I'd shake your hand but... well..." He pointedly looked between their broken arms with a wry smile before brushing some of his shoulder length, dark brown hair behind his left ear. The colour reminded Tane of melted Dark chocolate, the word that immediately came to his mind was Rich. His eyes were a stunning combination of violet and blue/green flecks with a dark ring around the edge, and he seemed to have a little dark blob to the left of his left pupil, that on closer inspection was actually heart shaped. Tane found it to be rather appropriate as he couldn’t seem to calm his pulse when he looked into the other man’s eyes.

It surprised them how well they got along and how much they had in common. They both worked in downtown offices, they both had TOTAL asswipes for bosses, neither of them liked sports and they would rather go out for a nice meal and a movie over going out clubbing any day, despite the fact that they were also both gay and according to society all gay men were club hopping, fuck bunnies!?. They even realized, after talking about their favourite take-out spots, that they lived only a few blocks from each other.
But the biggest surprise was that they hadn't met before, as they also had quite a few friends in common as well, which became apparent when more than a few times a friend would come by to check on one or the other and were stunned to find two of their friends in the room.

It surprised none of their mutual friends, that by the time they left the hospital the next day, Tane had already asked Kody out on a date the next week . The two were meant for each other and it didn’t take long for them to become the groups next official couple.
It was the strangest, yet somehow most natural start to a relationship either of the men had ever had. Everything just seemed to feel right between Tane and Kody.
Like it was fate that organized their peculiar little introduction.