A short faiytale that I wrote for #AnotherContestGroup's Tales of Time contest on DA. My story was inspired by the fairy tale by HC Andersen. But my story of course has a LGBT angle to it. 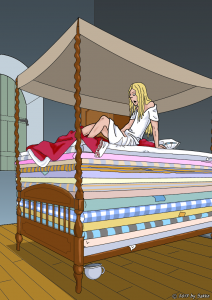 Once upon time in a land not too far away there was a Princess. When she was little she always wanted to play with the Queens ladies in waiting, who liked to dress her in lovely dresses and make her look pretty. When she grew older, her father the King wanted none of that.

“No son of mine should dress like that,” The King yelled when he saw her in her pretty dress and ordered her to put on a suit of armor and go jousting with her brothers.

The Princess became very unhappy because everybody else thought that she wasn't a Princess. She wanted very much to be a Real Princess and marry a handsome Prince. But when her brothers heard this they laughed at her saying that no Prince would marry an ugly little Prince like him. When she head their teasing it made her cry and she ran to her room.

“Why can’t anybody see,” she cried into her pillow. “Why is it that my body looks like a boy though I’m really a Princess?”

Finally she couldn't take any more of the Kings scorn and her brothers cruel teasing. She put on a travelling cloak over her beautiful dress and packed her best shirt and hairbrush and makeup in a little bag. “I will leave this castle forever and go to find my way in the world,” she thought as she walked out.

One evening when she was walking on her way there was a terrible storm. The wind tore at her travelling cloak as she tried to pull it around her to protect herself from the rain that poured in torrents. Through the rain the Princess could see a castle in the distance and hurried to it. When she reached the castle she banged at the door and asked to be let in.

A guard opened the door and asked who she was. “I am Princess Angela,” she answered. ”Please let me come in!”

The guard was unsure about what to do, but let her come inside from the rain and went to ask the captain of the guard. After all real Princesses don't usually arrive unannounced and without an entourage.

The Captain of the guard was a good friend of the Prince who lived in the castle with his parents, the King and Queen. He had recently followed the Prince round the world in search of a Princess for the Prince to marry. They had met many Princesses, but the Prince always found something wrong with them.

"If she says she's a Princess I must take her to meet my Prince," the Captain thought. "She may well be the one he would want to marry."

The Captain took Princess Angela to the hall where the Prince was at dinner with the King and Queen.

"What's this," the Queen asked when she saw the sorry looking visitor whose clothes were so wet from the rain that water was dripping all over the carpet.

"She says she's a Princess, your majesties," the Guard Captain said.

The Prince took one look at the Princess and fell in love. Her hair was a mess, her makeup had run away long ago, her wet dress clung to her body in most unbecoming way, but still she looked more beautiful than any Princess he had ever seen.

“You must be hungry from you travel,” he said and called the page to bring a plate for her.

“My Prince, you are too kind,” the princess answered politely, even though she was really hungry. Truth to be told she hadn’t eaten for two whole days, but real Princesses don’t complain, it is so unbecoming.

“Where have you been all my life,” the Prince asked. “I have been travelling round the world searching for a princess to marry, but until now I haven’t seen anyone like you.”

The Queen mother was not happy to see that the Prince was flirting with this so called princess. “I’ll soon put a stop to this,” she thought but said nothing. She called for her chambermaid and went to the guest bedroom. She had all the bedclothes removed from the bed and placed a pea on the bottom of the bedstead.

“Bring here all the mattresses you can find,” the queen ordered, "and pile them one upon another over that little pea."

When the Princess wanted to retire the maid took her to the guestroom. “There’s your bed, my lady,” the maid said. “The pile of mattresses is by the order of the Queen”. But she was a kind hearted maid and took the wet dress to be cleaned and lent the Princess a clean night shirt.

The Princess climbed to the top of the pile of mattresses and lay down. She was very drowsy, but she couldn't sleep.

“The Prince seems to like me,” she thought. “But if he knew, he would surely be disgusted,” she agonized. “Oh, they must all hate me, I’m sure!” Thoughts like these tormented her all through the night. Even the huge pile of mattresses felt hard and uncomfortable and in the end she couldn't sleep a wink.

In the morning the Princess climbed down from the bed feeling utterly exhausted and not at all refreshed. The maid had cleaned and dried her beautiful dress as she had promised. The Princess put her dress on and sat in front of the mirror and brushed her hair and put on her makeup to look nice for the Prince.

When she came to hall the Queen was waiting for her to come to the breakfast. “Did you sleep well,” the Queen asked.

“Not at all,” the Princess replied. “I was tossing and turning all night. My bed felt hard and uncomfortable as if the mattress was filled with stones.”

“That can’t be true,” The queen cried. “There was a pea under all those mattresses that only a real princess was supposed to feel. “

“I knew it,” the Prince exclaimed, “The first I saw her I knew she is a real Princess.”

The King and Queen and even the Princess looked bewildered as the Prince knelt suddenly in front of the Princess.

“My Angel, will you marry me,” the Prince asked.

“Why not,” the Prince asked.

“Don’t be ridiculous, my dear,” the King said suddenly. “If the boy wants to marry her, he should”

“But don’t you see, he is not a real Princess” the Queen demanded.

“On the contrary,” the King said, “your own rather silly test proves that she is!”

The Prince was still kneeling in front of the Princess. He took her hand between his and asked her again: “How about it, will you?”

The Princess was astonished. She could hardly believe that a handsome prince was actually proposing to her. She couldn’t help feeling this must be some cruel jest. But still she wanted it to be true, for it was all she had been hoping for.

“I will,” she whispered.

The King called immediately for his chancellor and for the bishop to start the wedding preparations.

“But your Majesty, the Prince cannot marry this Princess,” the Chancellor protested. “It’s not legal!”

“Your Majesty,” protested the Bishop, “the Prince cannot marry this – erm – Princess. The Church won’t…”

On her wedding day the Princess was very nervous. She had a new dress made for her of gorgeous pink satin and cloth of gold with a long trail, a present from the Prince. The friendly chambermaid, who was now her own maid, had helped her to dress and get ready.

The church was full of people. The King had invited all the Kings and Princes from the neighboring lands. Even the parents of the Princess had decided that they after all had a daughter now that she was going to be married to a future king and an important ally.

The choir sang beautifully as her father walked the Princess down the aisle where the Prince was waiting with the Bishop. Still the Princess felt that this must all be an elaborate and cruel joke on her expense. Soon all would be laughing at her for believing that a Prince as handsome and intelligent as her Prince would ever really want to marry a Princess like her. She felt like fainting but somehow she reached the altar.

The Bishop may have faltered a few times during the ceremony, but the Princess hardly noticed anything until the bishop asked her: “Do you, erm, Princess Angela, take this Prince Albert..”

“I do,” the princess managed to say in a voice that seemed too loud to her.

The Captain of the royal guard, who was the best man, handed the ring to the Prince who put it in the Princesses finger.

“I pronounce you man and – erm – wife,” declared the bishop.

The Prince and Princess and all the wedding guests walked in a magnificent procession the short distance from the church to the castle. The square that separated the two buildings was filled with celebrating people who wanted to see a glimpse of their future queen.

At the state banquet that was held in the newlyweds honour the Princess was crying so much she could not eat a bit.

“Why are you not eating, my darling,” the prince asked her.

The prince pinched her, “You are not dreaming,” he said.

And so they lived happily ever after and adopted many children. In due time the Prince became King and he and the Queen Angela were much loved by everybody in the kingdom. But that is another story.

Flight of the Foxes The story of a 13-year-old as she travels in the world of the online RPG Game The Pumpkin Kingdom.