This was just a rough preview to the real thing and nothing less. Initially Apex Predator was planned out as a book but I lost the original draft and decided to start a new one. My next idea if this doesn't work out is to release Apex Predator as a graphic novel. I had Alison Savros as my pen name, but my real name is not a secret anymore so it's probably too late for that. 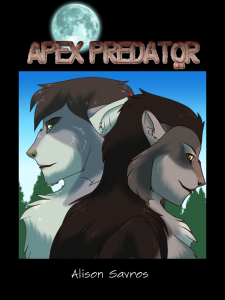 The wilderness was quite barren andempty in comparison to the city. The only native inhabitants notable fordwelling within the fields were birds and insects. Beyond the tundra is arundown, condemned building, a facility of some type. No one has been there foryears, though it is reported to be an old lab where hybrid animals were born;particularly through gene splicing and inner bio-bag growth. Real animals wereused in place of a bio-bag, but only once they were ready. Initially there wereno plans for these beings to even reproduce at all, but mistakes are easy tomake. On the upside, the scientists in charge of the creation of thesecreatures took advantage of this, allowing for these beasts to mature faster.

The animals physically had the appearance of both a humanand a wolf combined to create some type of new creature dubbed homini wolves.Initially being designed and trained for display in circuses, pseudo-sanctuaries,and news bulletins to show off to regular humans who adored these animalsspecifically for their resemblance to werewolves in popular media and fictionof the past and the adlet from Native American legends. At some point,attention to the animals had already come and gone and the breeders eventuallycome to the decision of doing away with the homini wolves to make room for betterfull blooded wolves, hybridized only with subspecies of their own kind. Out ofthe ignorant assumption that the wolves werent intelligent, this was discussedin the front office, allowing the experimental pack from the lab to hear theconversation through the air ducts next to their kennels.

The pack arranged their own plan to escape the facility on ajourney into the wilderness where they would never be found. After word had gotout that they had escaped, police were called to search for them, but not asingle trace was found. New wolves were created in place of the old ones;wolves with not a single ounce of human blood in them, and nobody cared forthese hybrids as much as expected as these wolves had already been seen in thewild before. With no more resources left to create more unique hybrids, thefacility became bankrupt and would eventually be condemned. The homini wolvesmade their home in the wilderness, living a somewhat tribal, humanizedlifestyle. They lived in peace for many generations, until a threat from thepast began to stalk them; someone who they had forgotten about several generationsago.

The Morning Star This is a one shot about one of my newer characters named Hart. On a rainy night a burglar breaks...
Athan/Tathar Strong language in parts. It's an extract from a long fic I wrote about my character...