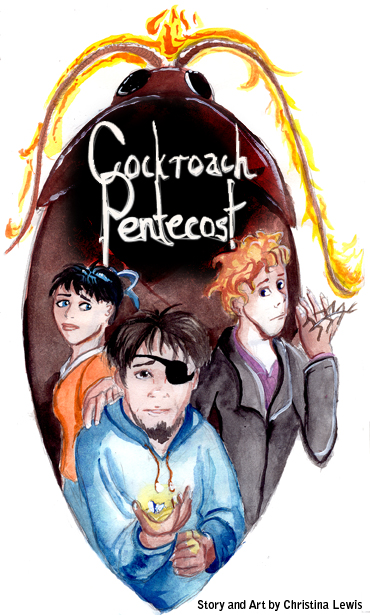 Everything started when the first cockroach achieved enlightenment. He became the god Blattaria, and his ascent to the divine triggered an invertebrate revolution, as other insects followed in his footsteps. As humans began to realize just how dead their own gods were, they slowly began to turn to the insect gods.

Two generations later, the world is beginning to slip into chaos, with different invertebrate religions competing for power and land, and what remains of humanity struggling to hold itself together. Amidst this, a farmhand from Wyoming, named Corach, only wants to find out what happened to his missing lover, Emily, who seems to have wandered off to become a disciple of the god, Mantidea.

This is a comic I'm doing mainly to improve my art skills, and to get the darn thing out of my head. I'm hoping to finish it within the year... Not sure if that's going to happen, but it can't hurt to try!

A man named Corach is wandering through the burning remnants of Casper, Wyoming, looking for someone named Emily. Here, he meets his cousin, Nevitt.

What you wanted? I just hope the one I love sees this.
At the end of my life living life