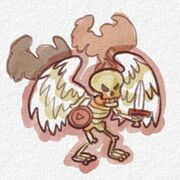 Welcome to the fray!

Participants, please remember to follow this thread for notifications!

This is a closed, basic level alpha test of PaperDemon’s upcoming ARPG Battle system! If you’re interested in participating in ARPG alpha tests or have questions, please send a private message to Shyftlock. Please do not comment on this thread unless you were personally invited to the alpha test.

Over the next months, we will be implementing a battle system for you to use to pit your characters against a wild variety of denizens of the Paperverse. Here we will be testing attack power and player engagement. We want to make this mechanic as fun and interesting as possible,so feel free to hit us with comments and suggestions.

To thank you for your time in helping us test this battle, you will receive a gold reward that you will be able to use later to purchase equipment for your character.

For this test challenge, you will be using the character you submitted for the Character Creation Challenge. You will need to choose an element for your character to fight with.

You have two types of attack that you can choose from and two potential boosts. Be sure to test out different combinations for different outcomes!

-Attack- Solo Element Attack: In a solo attack, your character will use their element to attack the miniboss.

-Attack- Duocast: To duocast, you will need to agree to team up with another player with a character of a different element and attack together. This might have an interesting effect on your elemental powers. Only one of the Duocasting players needs to submit the form, but it counts for both players’ attacks that day.

Duocasts available for this fight…

-Boost- Art Bonus: To gain a significant bonus to your attack power, you may add a simple black and white sketch of your character fighting the miniboss (feel free to get creative with what the miniboss looks like, the avatar below is just a suggestion). Upload it to your gallery here on PaperDemon and use the thumb code to make it show up in your forum post. Each piece of art can only be used as a bonus once. You can make a new piece to add a bonus to any attack. To add an art bonus to a duocast, both characters fighting must feature in the art but only one piece needs to be submitted. It doesn’t need to be perfect, have some fun with it!

-Boost- Weakness: The miniboss is weak to certain types of attack. Be sure to try different things to discover what elements cause more damage!

All elements also have a Healing Support Ability, which you can use on yourself or a comrade if your health is getting too low. You may also add an art bonus to healing requests by drawing a simple black and white sketch of your character patching up themselves or another character.

The surface of the murky water shivers as you stare through the trees towards the swamp. Before you can decide what to do, a ragged beast with a slime slicked coat bursts out towards you. The thick trees and mud prevent you from escaping-- your only choice is to attack!

Here is a list of players, their characters, their elements, and their HP. You can use this to help you pick who to Duocast with and see who might need Healing Support!

Make sure that you are following this topic so that you are notified as the battle progresses. You may make one attack per 24 hours.

Character: (link the ARPG character you made for the Character Creation Challenge.)

Attack: (Element attack or Healing Support? If healing, note who the healing is meant for-- your character or another player’s character.)

Element: (Fire, Sky, Earth, Water. Choose only one for this test battle.)

Duocast?: (yes/no. If yes, note which character you are pairing up with. Make sure that you get permission from that character’s owner first! Only one of the Duocasting players needs to submit the form, but it counts for both players’ attacks that day. You can only duocast if you are making an Element Attack.)


Art Bonus: (if applicable. Use thumb code to make your art show in the forum post.)

Art Bonus: n/a (might draw it later but just testing 🥰)

Art Bonus: n/a (might draw it later but just testing 🥰)

Arianrhod lashes out with an elemental burst of packed mud, hitting the Slime Beast for 10 damage!

With an impressive show of acrobatics, Arianrhod jumps over the Slime Beast’s head to avoid a snap of its teeth!

Kassumi charges up a powerful blast of cutting wind and casts it with breathtaking precision, hitting the Slime Beast for 20 damage!

Kassumi grabs a low-hanging vine and swings out of the Slime Beast’s reach!

Aras lashes out with a burst of ice, hitting the Slime Beast for 10 damage!

The mud beneath Aras’s feet thickens, dragging them down with a sharp tug as the Slime Beast summons its own elemental power. Aras takes 10 damage.

Theron strikes true, hitting the Slime Beast with a scathing swipe of flame for 10 damage!

Theron dodges out of the way, evading the Slime Beast’s clumsy attack!