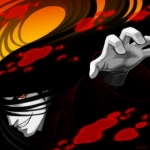 Devil's Spawn Authors: Fawks-chan One night of passion can have a world of reprecussions. When she realized what she was carrying she fled, no one could know especially not the father. What do you get when you cross a vampire with a demon? *some words are in Romainian* Type:
Fanfiction Chapters: 7
Comments: 1
Published: 01:02AM, May 2, 2010 GMT
Updated: 01:02AM, May 2, 2010 GMT Libraries: Erotica, Hellsing, Series

Hellsing is a manga series written and illustrated by Japanese manga artist Kouta Hirano with two anime adaptations. Hellsing chronicles the efforts of the mysterious and secret Hellsing Organization, as it combats vampires, zombie-like creatures called ghouls,[1] a powerful werewolf,[2] and other supernatural foes who threaten the kingdom of England. The name Hellsing is an alternate spelling of Helsing, as in Abraham Van Helsing from the Bram Stoker novel Dracula.