Vampires And Demons, Oh My! - Chapter 1

Vampires And Demons, Oh My!

(COMPLETE)When Bill's long lost and beautiful great-granddaughter comes to live in Bon Temps, it causes quite a stir amoung the locals, especially Sookie and Bill. But will a long lost lover and a dark past tear her away from her new friends! Minor Inu-yasha x-over 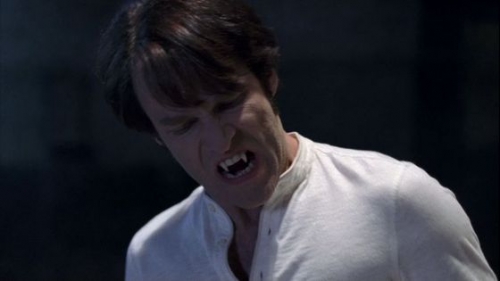 I was the first one to see her. She came into the Merlotte's about 8:oo the prettiest thing this side of the Mississippi. Her long black hair had red highlights and her green eyes seemed to sparkle when they looked at you. Her skin was a gentle honey caramel, it was hard to believe this beauty was even human. As the other boys began to notice, I didn't have to use my disability to know what they were thinking. She came right up to me with a smile that would melt butter.

"You're friends with William Compton?" she asked, her voice like a melody.

"…Uh…Yeah…something like that…" I replied taken aback by her forwardness.

"Great! …um…could you…introduce me to him…god I know how weird this sounds…" she blushed, which only aided to her beauty. I really didn't know how to respond to that. Why'd she want to meet Bill anyway? There are just some people who are so unnaturally beautiful, you can't deny them anything. This girl was one of those privileged few.

"…I…could take you by his house…after my shift is over that is…" I said like a fool.

"Really?! Wow thanks! My name's Fawkeisha by the way, but everyone calls me Fawks" she smiled. Girl was too damn friendly and too damn young, she looked to be only sixteen. Fawkeisha waited around until my shift was over. Guys would drift over to her table occasionally, but she seemed to deter them well enough. I drove her over to Bill's, that is to say I drove and she followed me on her motorcycle. Nice one, too, pretty little red number with Asian writing on it.

Fawkeisha seemed nervous as I knocked on the door, she kept straightening her clothes and combing her fingers through her hair. I thought maybe she knew Bill from somewhere but that theory was thrown out when he opened the door.

"Hey Sookie…and…friend…?" he raised an eyebrow at her. Fawkeisha looked at her feet, scuffling her combat boots into the concrete. Suddenly this girl had gone from drop dead gorgeous to absurdly adorable in no time flat.

There are not words that could correctly describe the look of shock on Bill's face , nor the one mine neither. But our shock only proceeded to make Fawkeisha even more embarrassed, I think.

"…not at all…come in…" Bill said, his tone feverish. He had done quite a bit to the living room. There was a couch now.

"One of your grandsons, Elias Compton, fell in love with Adelaide Dufou, a negro woman. They got married and a few decades later, I rolled down the tube" Fawks shrugged.

"That's because his name was expunged from the family records. He married a black woman, remember? He was considered a disgrace and every remnant of him belonging to the Compton family was either erased or covered up…" Fawks shrugged again. It made sense, even though we lost the war, there was still a lot of racism back then, still is now. By now, Bill was looking all hot and bothered, Fawks was doing her impression of a frightened lamb.

"…So…You're my great-granddaughter…how old are you anyway?" He asked. Fawks glared into the floor, scuffling her boots again, she mumbled. Bill went on his haunches in front of her, grabbing her chin.

"…A little louder for those without my gifted hearing"

I immediately knew he was talking about me.

"…Sixteen…" she huffed. I grabbed the couch for support.

"…Sixteen…are you even old enough to ride a motorcycle?!" my voice sounded panicked even to my ears.

"I got my license back in Japan" Fawks interjected.

"So where are your folks? Surely they don't know where you are" Bill began. This had suddenly turned from a heartwarming family reunion to an interrogation.

"…My dad's back in Japan…and my mom's…dead…" She said quietly. I immediately felt sorry for her, Bill, on the other hand, was another story.

"How'd you get here? Do you have any relatives in Louisiana?"

"…Yeah, but the cops are probably swarming the place…" Fawks mumbled.

Bill sighed, heading for the kitchen.

"I'm calling the police, let them know there's a runaway in my house"

"No please don't! I don't wanna go back there!!" Fawks cried, tears pooling.

"Why not honey?" I asked. She sniffled gazing around the room, trying to make the tears stop.

"…The bastard hits me…" She mumbled.

"What?" Bill was back in the room.

"My Father! He hates me because I'm his bastard baby…On one of his business trips to America, he knocked up my mom. Then she died when I was four…Cancer…I was forced to live with him and my big sister. When his wife found out he had an affair, she left him…he blames me for that!!" She sobbed. "…I was just four years old…my mom had just died…and that bastard…threw me down the stairs!"

Bill looked at me, I looked at Fawks letting down my guard to hear her thoughts. I regretted I had. Everything she said was true, and the stuff she hadn't, had me in tears. When she had told people about her father, no one would believe her. She had tried to get away from him when she was twelve by moving in with her aunt, uncle and cousins up in Baton Rouge. But that had only gotten her raped by her cousin's fiancé.

Just by looking at me, Bill knew. He gave a sigh, running a hand through his hair.

"…This is the only place…no one would look for me…" Fawks sniffled wiping her eyes on her sleeve.

"…Why'd you take so long to leave…?" I asked, my tears also under control.

"After awhile you learn to live with it, and it's not such a big deal anymore" She shrugged. "…All my life, I believed my father hurting me was okay…since when I told people nobody would believe me, anyway. The only thing that kept him from killing me was my big sister, but she's going off to college soon…and I rather not die at age sixteen."

"If he hates you so much, why wouldn't he just send you off when you sister's gone?" Bill asked.

"…Yeah…the first one and the remake…" he shrugged.

"Why do you think Kayako kills anyone and everyone who sets foot in her house, hmmm? And not just kills them, tortures them with insanity…It's because, she wants them to suffer the way she was made to suffer and she's jealous of those who are still alive…My dad's a lot like that…He wants me to suffer before he finally kills me…" She smirked sardonically. I looked at Bill, if I hadn't seen everything she was describing in her mind's eye, I wouldn't have believed it.

Bill sighed again, running a hand through his hair, "…I'm…not sure if I have the room…I haven't entirely renovated this…"

"You can stay with me" I blurted out. Both Bill and Fawks stared at me.

I had no idea what I was doing, I just knew I couldn't leave that girl to die.

"Thank you, Sookie!" She cried, throwing her arms around me. Bill looked at me like he thought I was crazy and maybe I was.

"You sure about this, Sookie?" He asked me as we were leaving.

"…Not really…" I said confidently.

Weather it had been pity or insanity, I felt I was doing the right thing.

Man From Beyond the Boarders This is a 100 Writing Challenge that I am doing with the friend. Mine is one combined story...
Unwanted but Needed A love/hate Gohan x Vegeta lemon. Not too good, but I've only written a few and am still learning...