When Kagura makes a sudden attack, was she really there, or was it a new battle that will begin? And how do you fight an enemy, that you can only see? InuYasha is in a battle of his life, how does he know that something very powerful is at stake? Cover art commissioned by Cat-Art(DA). 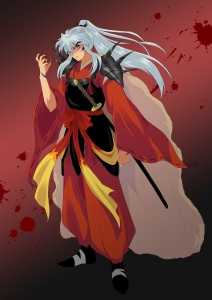 The sun was just setting, the eerie glow of its orange light as it settled behind the hills. The trees blew, their branches swayed in the weak wind. The leaves tore off one by one, their yellow, orange, and red color as they settled in their new home, in the soil. The spring flowers had begun to wilt, and the fall life had sprung. The naked trees now stood in the hills, their branches bare, with no sight in life. They would have new leaves, when the newly winter would soon pass. The sun now lay almost hidden by the Earth; the red ball of light now was nothing more then a small speck that had retreated to let its brother night pull its heavy blanket on the Earth's sky.

A small mouse skittered out of its hiding place, searching desperately for food, knowing that winter was fast approaching. Without food, it would die. The mouse ran up and took a small piece of food that had been deserted by man. Nibbling like a ravenous creature is was, the mouse nibbled the small crumb with great speed and grace. When it was gone, the mouse sniffed the air with its small nose to continue for its desperate search for needed food.

Two golden eyes seemed to make the creature seem less important. The mouse ignored the daiyoukai that stood on the hill, staring at the small body. Inu no Taishou looked back at the bleeding sunset, his armor moved as he turned his neck to watch natures true beauty. The Youkai Lord stared into the hazel sky, watching the birds began their long trip south, to avoid the bitter cold.

Inu no Taishou felt the two cold beads in his clawed hand He moved them in-between his finger, planning, knowing a youkai was after his mate.

Inu no Taishou looked in the sky, he felt his body pull up and with grace he was a large silver dog, flying over his lands, over to his love, to protect the only son, that would hold the secret of the Kami's.

"Darling!" Izayoi cried as she hugged the baby hanyou in her arms. Tears ran down her eyes as she clutched the howling infant.

"His name is InuYasha now go!"

"You, how?" Izayoi heard Setsunano Takemaru's voice and Izayoi trembled with the infant in her arms.

"Take him, no one will find out what he holds, Izayoi!"

Izayoi ran from the burning castle as she heard her mate clash his sword for one final time. She held the crying InuYasha in her arms, as she felt the two gold beads in her small hand. She leaned over to get away from the burning castle, with her fire rat to protect her. She moved away, holding the beads as the disappeared into the young hanyou's eyes.

Hidden Lake Kenshin takes Kaoru swimming with him at a hidden lake.
Writhe An explanation for Vegeta's fear of "Squirmy Things" (No sex, or rape- just a gross...