[ILLUSTRATED/EXPLICIT] Kaname Kuran has watched Zero Kiryu suffer with his blood lust for years, but now it is time for Zero to make a choice. Become what he hates the most or suffer from insanity and die. Kaname offers his teachings to Zero, but his wisdom comes with a price. It isn't long before Zero realizes just how dark and twisted the life the pure-blood leads. He knew Kaname was a monster, but he never imagined this... 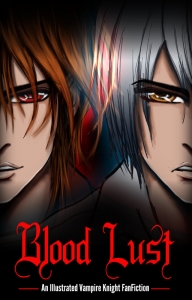 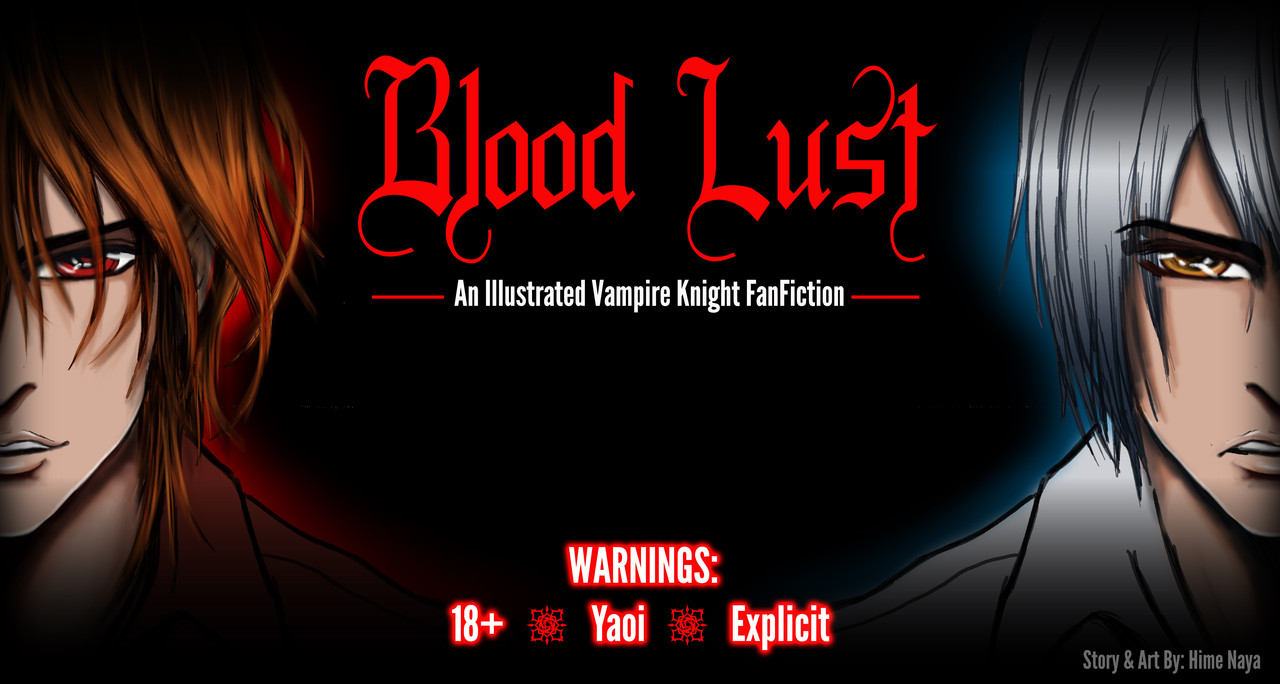 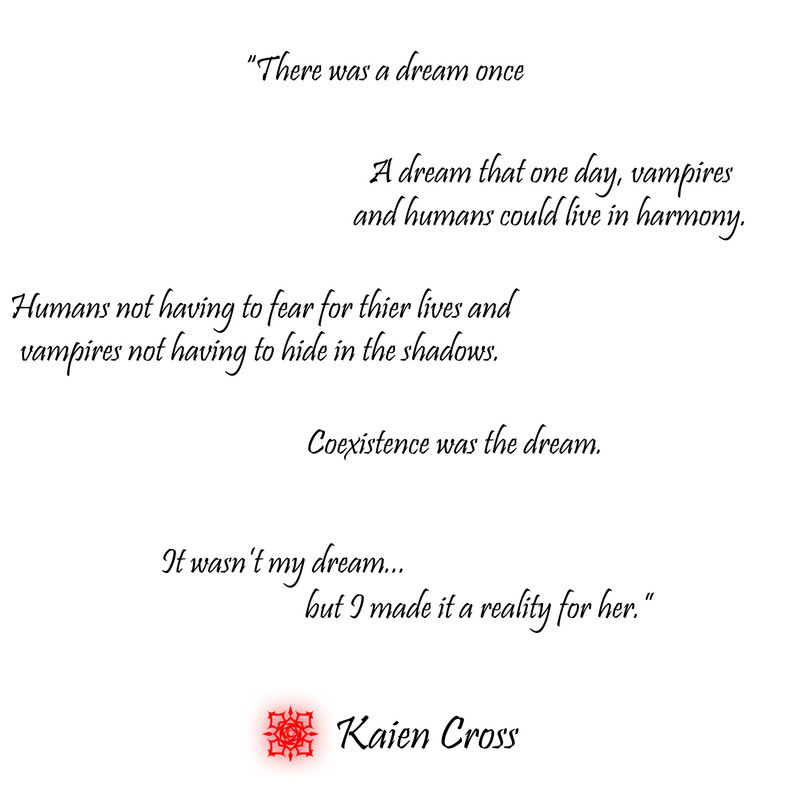 The campus courtyard was deathly silent as the night air continued to drop in temperature. Winter was coming faster than usual this year and the clouds were threatening to lay down a blanket of frost. The season was just around the corner and the freeze was beginning to take over. Plant life starting to wither away, humans wrapping themselves in thicker garments to sustain their warmth and monsters doing what they must to survive. 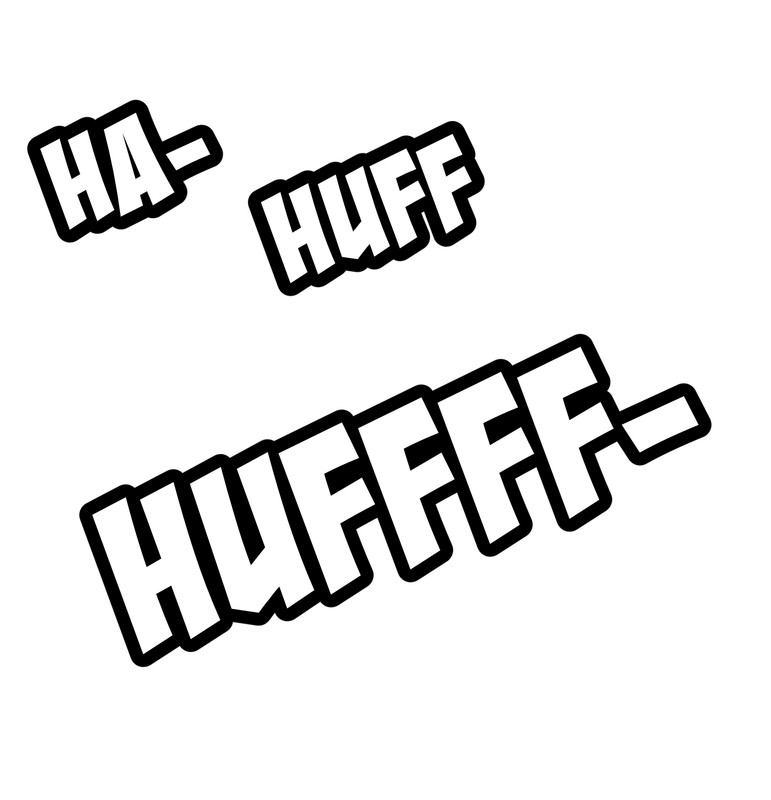 The school guardian stumbled across the courtyard recklessly; his breathing frantic and his body weak. The chilled air fogged at the tip of Zero’s lips as his hot breath collided with the coldness around him. 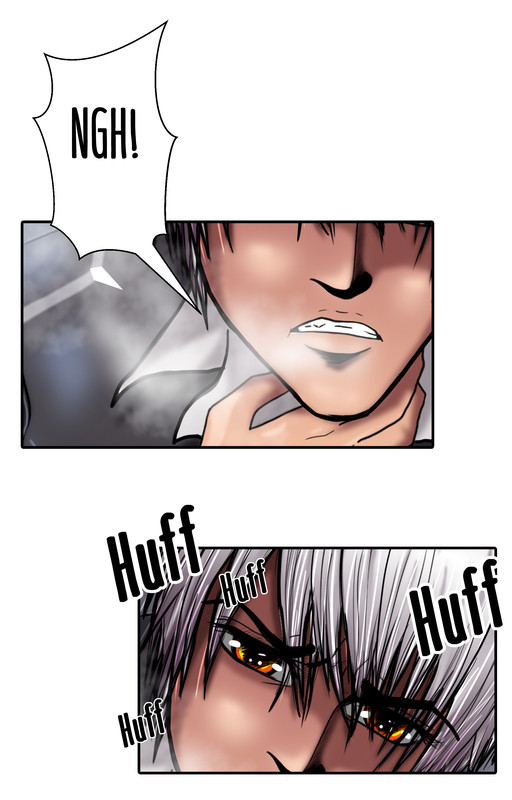 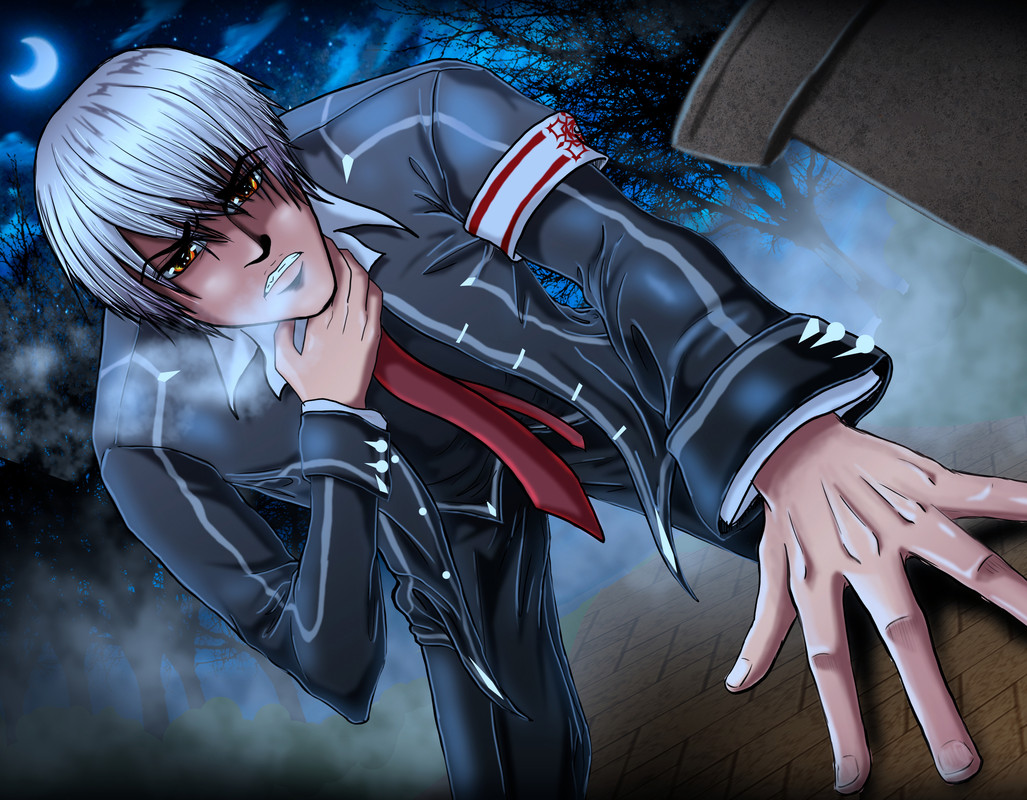 The grunt of pain slipped out of the man’s mouth as he collapsed to the ground in front of the courtyard fountain. Water still flowed from the beautiful piece of architecture, but it wouldn't for long. Winter would put a stop to it.

Crimson eyes begged for comfort as his feverish panting continued. His body was changing, he couldn’t deny it anymore. He could feel that God-awful burning sensation in the back of his throat again.

He knew what it was.

His blood lust was trying to push him over the edge once more.

How many more nights could he handle this before he snapped? That's what the pure-blood thought as he walked towards the fountain, watching the fallen man continue to groan in torture.

Kaname Kuran knew the man in front of him would rather die before converting to the creature he was quickly becoming. Kaname watched the school guardian struggle, it amused him; seeing his enemy being reduced to this pitiful state.

"Tell me, Kiryu. How much longer will you keep fighting the inevitable?"

Kaname asked in a stern tone. His eyes never wavered from Zero as the young man looked up in shock. The pain and lust inside of him left the school guardian unable to hear or even sense the vampire's presence as he approached.

Zero's eyes narrowed as his gasps for air began to ease.

"Get away from me." Zero demanded; hate dripping from his words.

The two men had never gotten along or even cared for one another. Kaname found Zero weak and ill fit to protect anyone, while Zero saw Kaname as a monster; one that should be destroyed quickly.

Kaname could see the pain beginning to wash away from Zero's face; obviously the pills had finally taken effect.

"How many did you have to take this time?"

Mockery hung in the pure-blood's question as Zero slowly lifted himself to his feet; legs still wobbly from the adrenaline rush that had just coursed through his body.

"Leave me alone...Or I'll kill you where you stand." Zero spat the threat out violently. Making sure Kaname could hear the hate in his words.

"You've been throwing that same threat around for years. Perhaps it's time you find some new material." Kaname taunted.

The pure-blood enjoyed provoking the younger man, he knew how to get under Zero's skin and made sure to do it frequently. It didn't take much to push Zero over the edge in regards to his anger. A distasteful trait in Kaname's opinion, but nonetheless just as entertaining.

Before Kaname could get any closer Zero thrust his hand forward in one quick motion; Revealing the gun he chose to carry as his weapon of protection. A small chain connected the pistol to

Zero's inner jacket and as the chain swung through the air Kaname could see the moon's glow dance across the metal. The engraving on the side of the barrel read, 'Bloody Rose'; A weapon every vampire feared. 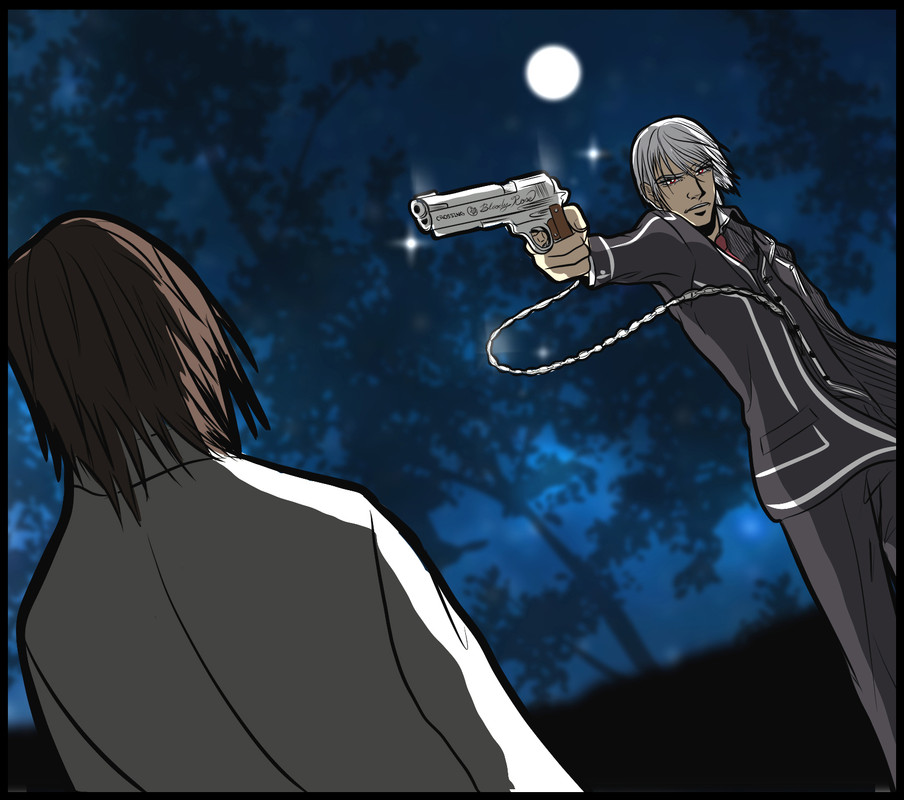 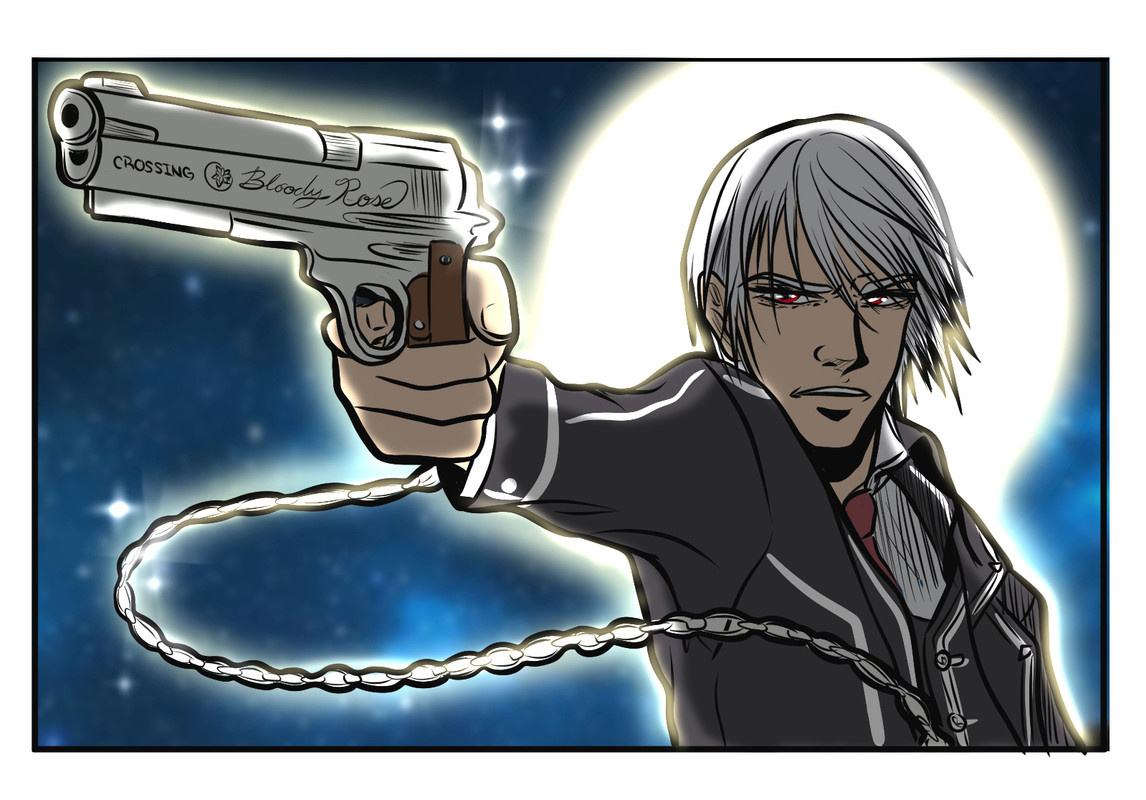 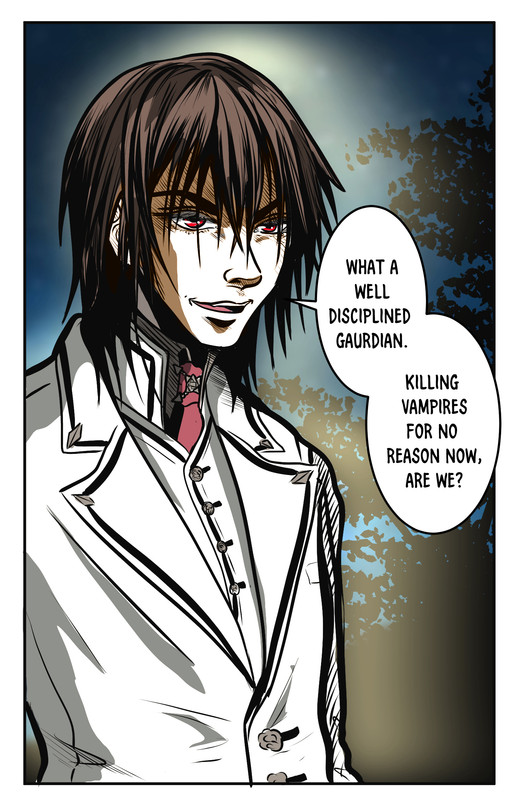 Kaname smirked at Zero's overly dramatic move, not phased by the weapon that was aimed in his direction.

"Being a vampire is reason enough to kill you." Zero declared in a disgusted manner as he took a step forward but swaggered slightly, still weak from the events his body had just gone through.

Kaname chuckled in response, "If that is your reasoning, then perhaps you should turn that gun around and aim it to the real danger here."

Zero's eyes widened a bit at the quick verbal lashing Kaname was able to dish out before the vampire continued, "You're fighting a losing battle, Kiryu."

"What do you care?!" Zero shouted as his eyes revealed to Kaname how much he loathed the pure-blood's existence.

Kaname's lips curled as he placed his hand on the gun and lowered it away from his own face.

"I don't. It's just a little advice...From one vampire, to another."

Zero growled in frustration as he let his hand fall; the Bloody Rose now at his side. Zero knew that if he killed Kaname here on school grounds, he would have to answer to not only Headmaster Cross, but the Council as well.

Aggravation and the vampire's existence wasn't a good enough reason to allow Zero to shoot Kaname where he stood. Though Kaname was a monster in Zero's eyes, the pure-blood was highly respected by his kind and considered a rarity with his untainted blood. If you were an enemy of Kaname's then you were an enemy of the entire vampire race...Zero had earned that title.

"I'm not like you." Zero managed to whisper as he felt a splitting headache pulsate in his skull.

The soft groan reached Kaname's ears before the freezing wind carried it away.

"No, you and I are nothing alike. Thank God for small favors." Kaname retorted as he walked closer to Zero.

A silence fell between the two as Kaname stepped to Zero's side, looking down on the man, towering over Zero easily by a few inches.

It amused Kaname that no matter how much pain Zero seemed to be experiencing, the boy would still be on his guard no matter what. Waiting for any excuse to pull the trigger on Kaname.

Zero's legs were unstable and Kaname could see the struggle Zero was having just to remain standing. "One day, Kiryu...You will have to learn to toss your pride aside, for the sake of your sanity and everyone else's safety."

Zero let the words filter through his mind.

He knew it was only a matter of time before he turned  the Bloody Rose onto himself. It wasn't a question of if, but when. Zero was no fool. He knew madness was slowly seeping in and he would make sure he would end himself before he ever crossed that line.

The thoughts overwhelmed Zero and he began to feel dizzy once more. He begged for just one day where he could live in peace. No pain. No episodes. No hunger.

Zero stumble backwards, but Kaname had placed himself behind Zero, stopping the guardian from falling. As Zero's body was leaned up against the pure-blood's chest, the Bloody Rose was raised up to Kaname's face. Zero's hand shook and he had little focus.

He was trying to act tough, but Kaname just saw it as pathetic. The pure-blood steadied Zero's hand by clutching onto his wrist. Kaname's other hand gripped Zero's face abruptly and forced the boy to look up into his eyes.

There was a moment of silence and all they could hear was Zero's suffering.

Kaname brought his mouth next to Zero's ear and whispered menacingly. 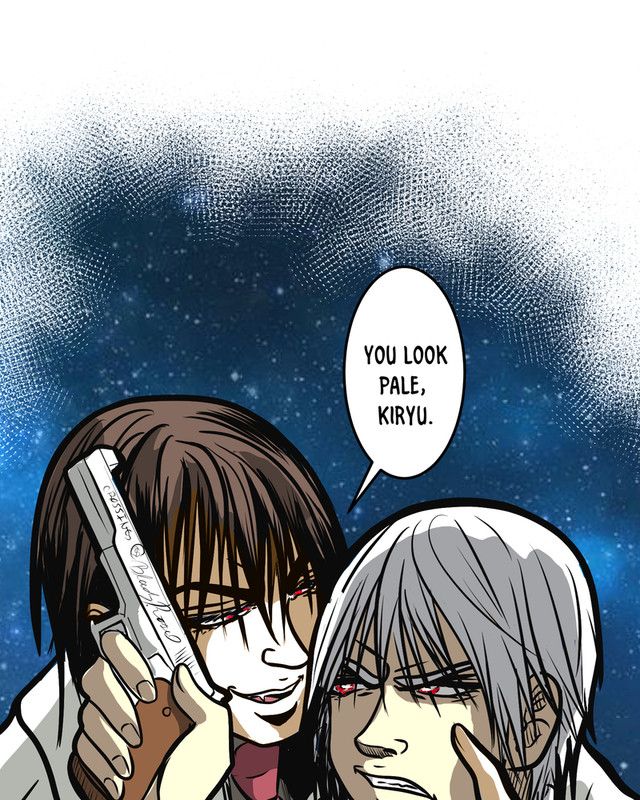 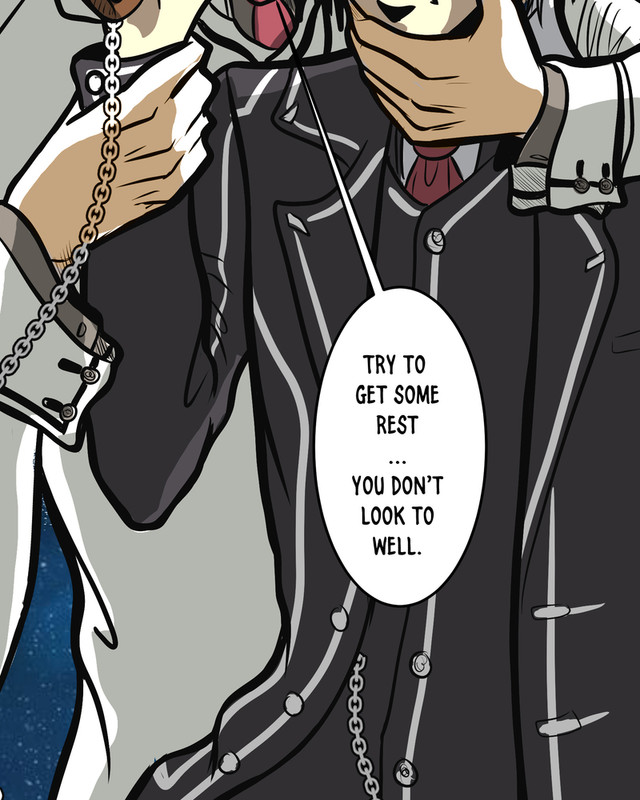 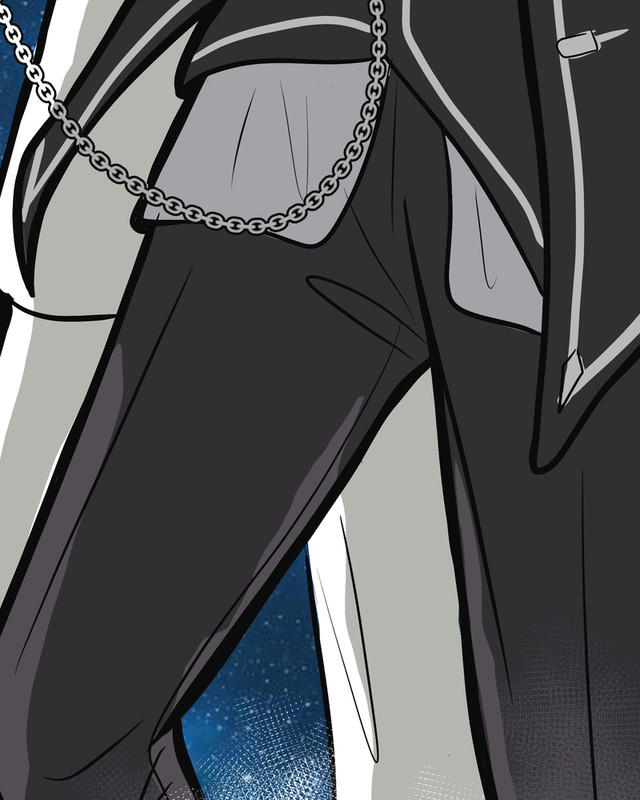 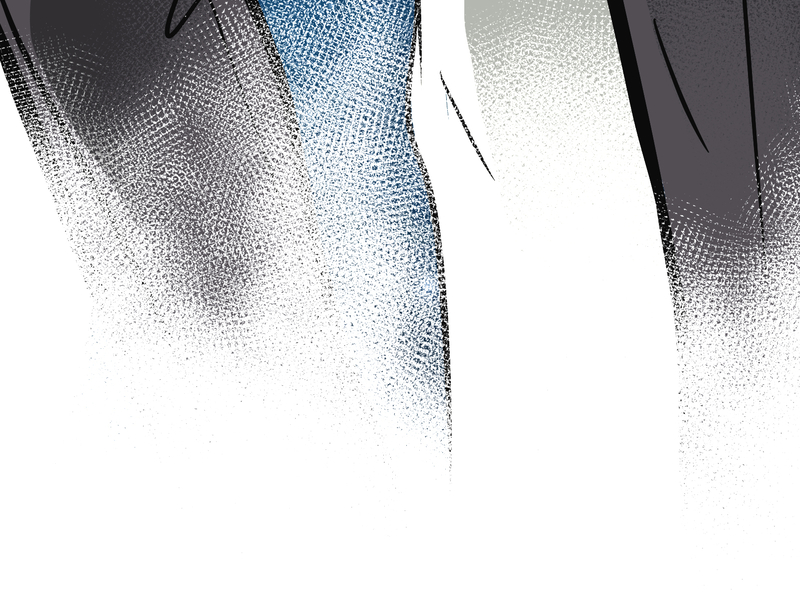 With those few threatening words, Kaname walked away from Zero. Leaving the man to struggle to gain his balance once more.

Zero stood in the cold, attempting to will the pain away that throbbed in his head.

Zero allowed himself to pocket his gun before cradling his forehead once more. The blood lust and migraines always came hand in hand and Zero was starting to question when his body was going to give out from the damage these side effects were inflicting on him.

Zero accepting what was happening to him. He was dying. His human self was rotting away and a monster was itching to take over.

Zero's eyes drifted to the Bloody Rose, now cradled in the gun holster near his chest. He shook his head slowly, knowing he would never allow himself to turn into a vampire.

He would make sure of that...at all costs.

NOTES: My very first post! I hope you guys liked it!

I hope to update this Bi-Weekly! (In between all my other projects). And yes all the fanart you see is original art from me. 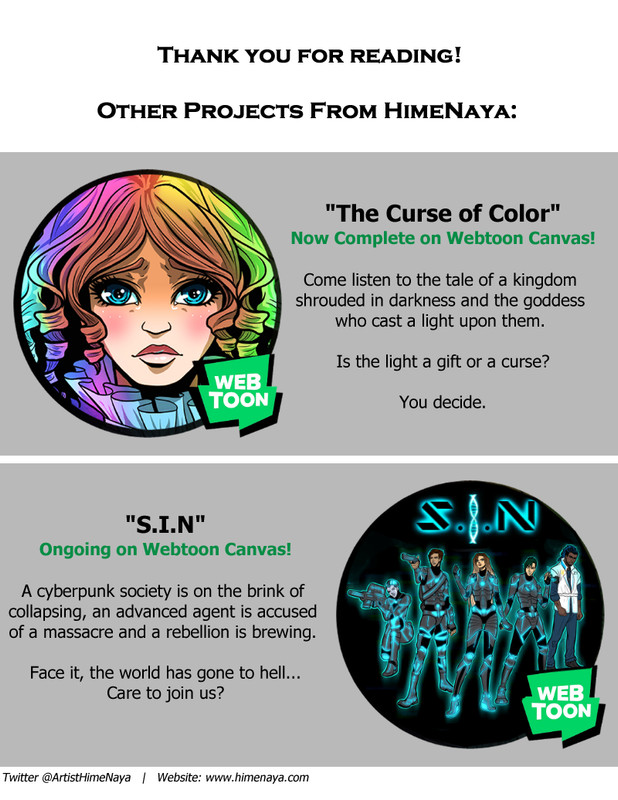