What if the Kyuubi destrode all of the Uchihas but Sasuke and Sasuke's last name is changed from Uchiha to Uzumaki and is Naruto's brother? Holy moly this is going to get interseting. This was first posted on fanfiction.net by me so I'm not stelling this story. 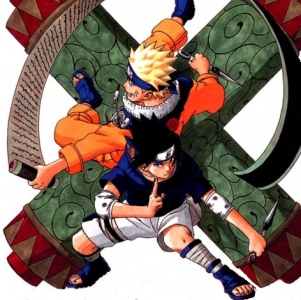 "Naruto, Sasuke, get back here you brats!" yelled a chunin chasing two boys, one with black hair, the other with blond hair. "Ha ha ha ha," laughed the two boys running away from the chunin with a paintbrush and a bucket of paint. "You guys are just jealous cause you don't have the guts to do what we do!" yelled the blond, Naruto, at the angry chunin and another chunin that was chasing him and the other boy. "Losers! Wannabes! You will never catch the Uzumaki brothers!" (Yea those two boys now have a group name) yelled the black hair, Sasuke, at the angry chunin too. (P.S. they are both wearing the same outfit that Naruto wears (goggles, orange pants, orange jacket) in the series since that is the only thing Naruto can buy and both do love ramen too. alot. )

"Lord Hokage!" yelled a villager rushing up to the third Hokage who is writing a scroll. "I hope you are bothering me with some trivia and don't tell me it's Naruto and Sasuke again," said the third pausing from his work. "It is Naruto and Sasuke again! They climbed onto the great stone faces and they put graffiti all over the Hokage!" said the villager pointing to the stone faces and on them was graffiti that look like only kids would do. The third than sighed with his pipe in his mouth about hearing the two boys going into trouble again.

"Naruto, Sasuke! Slow down!" yelled a chunin, he has been chasing them the last ten minutes. Soon when he turn around a corner the two boys vanish and could not find them so he keep on looking for them down another street. Meanwhile he did not know that Naruto and Sasuke were hidden behind a sheet of paper that looks like a wooden fence (Like in episode one Naruto uses one to get away from the angry ninja) and put down the sheet. "Ha ha ha," laughed Naruto next to his brother,"That was too easy." "Ha ha ha," laughed Sasuke (girl fans: OMG! Sasuke is laughing!) with Naruto,"Yea! Did you see the look on his face when he saw what we did to the stone faces?" "Yea it was like this!" said Naruto as he gave a funny face to Sasuke. "Yea like that!" said Sasuke still laughing. "Oh yea you two!" yelled a voice beside Naruto and Sasuke. Both boys jumped when they heard the voice beside and turn to see a very mad Iruka-sensei. "Were did you come from Iruka-sensei?" yelled Naruto with a confused face. "Yea and what are you doing here, sensei?" yelled Sasuke too with a confused face too. "Now what are you two doing here? You're suppose to be in class," said Iruka pointing to Naruto and Sasuke with an angry look on his face.

In the academy, Naruto and Sasuke Uzumaki are tied up in the front of the classroom with a very disappointed Iruka-sensei. "I'm at the end of my rope ,Naruto, Sasuke, tomorrow is the exam and you failed last year and the year before that. You still have another chance tomorrow and you two are messing it up," said Iruka with his arms crossed looking at the two brothers. "Hmp," said the two boys shaking their heads like they didn't care. Just than Iruka snapped and yelled,"Ha since you screwed up Naruto and Sasuke, everyone will have to review that transformation justu!" A lot a of 'ah man' and 'this stinks' were heard in the classroom as they all lined up in the front of the room. First was a pink hair girl name Sakura was first and she transformed into a perfect Iruka. "Very good Sakura," said Iruka to one of his favorite students in the academy. "Yea I did it!" said Sakura loudly, 'I kick butt!' yelled Inner Sakura inside of Sakura's mind. "Next is Yamanaka Ino," said Iruka and another girl with blond hair in a ponytail step up and transformed into a perfect Iruka too. "Ah good, Ino," said Iruka nodding to Ino. (Ino and Sakura are still friends cause they think that Naruto and Sasuke are total idiots.) "Next up is Uzumaki Naruto." said Iruka and Naruto stepped up to do a transformation justu. "Transform!" said Naruto loudly than all of a sudden there is a puff of smoke and when the smoke cleared there was a beautiful long blond hair girl naked in place of Naruto. Iruka just stood there with his mouth down pass his chin and fell back wards with a major nose bleed. "Ha ha ha," laughed Naruto dropping the justu," Got ya that's my Sexy No Justu!" "Ha ha ha," laughed Sasuke walking up to his brother and giving Naruto a high five,"Good one Naruto!" Soon Iruka jumped up and yelled,"Cut the stupid tricks! This is your last warning!"

Next up Naruto and Sasuke take the exams. What will happen? Well I'm not going to tell you cause I want to keep it a surprise. Please give me some ideas of what Naruto and Sasuke should do for a prank like exploding the toliets in a resturant or putting hair dye in Sakura's shampoo to make here turn black.