[InuYasha] A story told through a series of drabbles and oneshots, tracing the slow and steady progress of trust. Sesshoumaru and Kagome, CU. 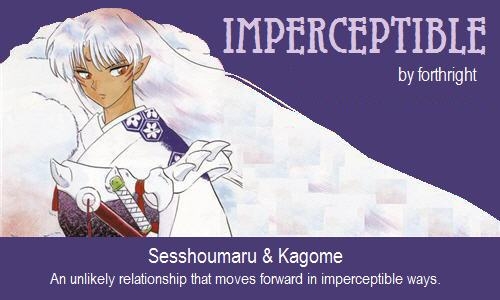 Disclaimer: I do hereby disclaim all rights and responsibilities for the characters in this drabble… especially for the young woman who's unwittingly placed herself at the center of everyone's attention. A nod of recognition is bent towards Rumiko Takahashi for her creative prowess.

Author's Note: This drabble kicks off my involvement in a Sess/Kag Drabble Contest Community on Live Journal called ebony(underscore)silks. Imperceptible shall serve as my Sess/Kag pairing-specific drabble and oneshot collection just as Incorrigible encompasses my Mir/Kag collection and Tolerable stands as archive for my Mir/Sess collection. Just keeping things orderly!

This drabble was originally posted on Live Journal on April 28, 2007.

A furrow of concentration dinted Kagome's brow as she poured a steady stream of boiling water over the tea leaves in her mother's second-best pot, releasing their perfume. Today was too important to mess up by a show of clumsiness. On the cusp of an uneasy alliance, Sesshoumaru had agreed to meet with his half-brother. This tea was intended to give the proceedings a touch of formality, helping ease the awkward beginnings with a show of courtesy. Mama had helped choose an especially fine blend for the occasion, hoping to impress the feudal lord—a testimony to future luxuries.

Hiding behind the illusion of self-possession, Kagome stole a glance at the two males; each avoiding the other by fixing their attention on her. Kagome shifted. Sesshoumaru's gaze was proving especially difficult to ignore; its flatness put her on edge, and the boredom in his manner was an unsurpassable gulf.

Extending the first cup with both hands, Kagome steeled herself to meet Sesshoumaru's eyes, but his gaze, bright with interest, was locked on the tea. Nostrils quivered slightly as steam misted upwards. Their gazes locked, his full of unasked questions. She'd earned his notice, and the intensity of it stole her breath. Kagome's grasp wavered precariously, but a clawed hand quickly reached out, steadying hers, then extracting the teacup from nerveless fingers. Blushing, Kagome nodded her thanks. Wordlessly, Sesshoumaru inclined his head. As he watched her over the brim of his cup, she wondered if she'd regret this loss of anonymity.

Insanity Of Life Our life is to short to waste.

Be There For Me Oneshot, Minimal Slash, FFVII:DoC. Reeve laments upon the events following Dirge of Cerberus,...