[MASK OF IDENTITY - ORIGINAL] Yukio escapes from the manor for some peace and quiet... but that's not what he gets when he bumps into the nosey Amai. Short Story 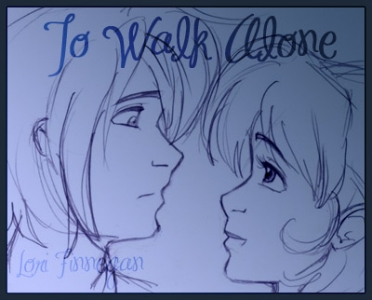 The air was cold and crisp that evening as Yukio walked up to the iron gate. Silhouetted against the dark purple sky, the iron rods made him feel imprisoned in his own yard. Then again, it was almost too easy to escape... or at least pretend he had. He squeezed his eyes closed, and pressed his fingers so tightly into his palms that he felt his nails digging slightly into his skin. He tried his hardest to concentrate on the rocks that spread out over the ground on the other side of the gate, and slowly, he opened one blue eye. Instead of standing within the confines of Master Anzai's estate, he now stood among the dark trees of the forest that surrounded the property.

He needed some space. He needed to be outside for a change instead of being locked up, forced to look at the same walls that he'd been staring at since he'd been three and a half. He didn't even remember living at his mother's house... but he wished he had. He wished he remembered his father.

Not that any of that mattered anymore. He was alone right now, and that was the way he wanted it.

The rocks were hard and jagged beneath his soft feet. He'd forgotten to put on his shoes in his haste. That didn't matter either. The pointy rocks were nothing compared to the ache of confinement. He stepped hard and swift on the rocks until the grass overtook them, and soon, he was approaching a clearing. He hadn't remembered ever treading this far before, but then again, everything looked different in the dark. Shadows cast from the trees, but after they ended, the grassy clearing spread out for quite a ways. One solitary tree stood at the center.

The wind blew past him, blowing his dark hair into his eyes, and hissing as it passed through the leaves overhead. Yukio tilted his head to the clouds and watched them slowly move by until he became dizzy. He closed his eyes, and took a deep breath to orientate himself, and when he opened them, another pair of blue eyes looked right back up at him.

"GAH!" he exclaimed, jumping backwards, tripping over an exposed root at the forest's edge and just nearly missed a hard fall as he grabbed onto the closest tree trunk he could reach, breathing hard. "What the..." he stammered, straightening himself out and pushing away from the tree.

He couldn't see her face against the moonlit sky, but he knew it was her.

"What are you doing out here? How did you get out of the..." he trailed off. She stood so still that she was starting to give him the creeps. "Didn't Master tell you that you're not supposed to..."

"I come out here every night," Amai answered, her voice unwavering. "But I never see you out here, Yukio."

Yukio wasn't satisfied. "Does Master realize that you're here?" he demanded, emerging from the woods once more and standing opposite of her. "If he knew..."

"Anzai doesn't know that I'm here," she replied before he could go on. "But he probably knows that you are. And if he follows you, he'll know my secret."

Amai reached up and ran her finger along the left side of his jaw line. Yukio visibly shivered. "It's not really a secret," she went on, pretending she didn't see the power she had over him. "But if he finds out I'm here, he'll watch me much more closely than before. The truth is... I can't stand being cooped up in that place all day. This is the only time I can get out without anyone noticing. Until now."

“Sorry,” Yukio said, turning his face away from hers and glaring at the single tree out in the middle of the clearing instead. “It’s not like I was following you or anything. Do you think I would have practically killed myself in shock over seeing you if I had known you were here?”

“I’m not saying it’s your fault,” Amai told him.

Out of the corner of his eye, he saw her reaching her hand towards him. The moment her hand touched the blue stone that hung from his neck, he took a step backwards.

“You’re so odd about that necklace,” she said, as though she’d been thinking about it for a long time, but just now had the nerve to say it. “Why won’t you let me look at it?”

“It’s not for anyone to look at,” Yukio replied as he lifted the stone and slipped it inside his shirt. “And it’s not something you’d understand. Maybe in time I’ll explain it to you. But not now.”

“Okay… I just don’t understand why you can’t tell me.”

“You wouldn’t understand,” he snapped, and then lowered his voice. “It’s seriously nothing to worry about. So don’t.”

They fell silent, and Yukio once again noticed the whistling wind blowing through the trees. It was getting darker than before, and when a thick cloud covered the shining moon, the two of them fell into the shadows along with the trees.

“You should go back,” Amai said just as a shiver ran up Yukio’s spine. Suddenly it had become much cooler than just a moment ago. “Your master is probably looking for you.”

“He’s not,” Yukio assured her, but his tone wasn’t as sure as he hoped it would be. “He’s sleeping. He doesn’t know I’m gone.”

“Someone could see us out here,” she went on.

“No one dares trespass.”

“You’ll get sick again,” she hissed. “And Anzai will have my head!”

“It’ll only get colder!”

“Not this time of year.”

“Stop arguing with me!”

Yukio stared at her. “I’m starting to be sorry I ran into you,” he said.

“You’re going to get me in trouble,” she said. “If Anzai knows that I’m coming out here, he’s going to keep me locked up in that place right alongside you.”

Half of Yukio wanted to defend his master, but the other half knew she was right. “I’m not locked,” he said, taking the step back in her direction. “I’m all the way out here, right?”

Amai sighed. “No offense, Yukio, but if you took ten more steps away from the house, I would bet everything I own that he’d be out here within two seconds.”

This time, he wasn’t afraid to glare at her. “It’s a damn good thing you don’t own a thing.”

She closed the space between them. “That’s not true,” she said as she hooked her index finger into his collar. “I own you.”

“No…” he muttered, but it was hard to speak with her knuckle pressed to his collarbone. “No one owns me.”

“I could if I wanted to,” she countered, cupping her other hand to the side of his face.

Yukio cursed her silently as he fell into her arms. The next thing he knew, his head was on her shoulder, and he felt like someone had been dancing on his skull.

“I’m kidding, you know,” she whispered into his ear. “I know how much you want to be free from all of this. I just can’t stay in that house… and after seeing how overprotective Anzai is… I don’t want to take any chances that he’ll find out that I’m not always under his roof.”

“You want me to sacrifice my freedom for yours?” he whispered back.

“No, but Yukio… you can’t leave without him knowing. You know that.”

He didn’t say anything.

“Besides… we’ll both be out of her soon. It can’t be too much longer.”

“No,” he said, his voice low. “You’ll be out of here soon. I’ll be stuck in this damn prison for ever. And if by some horrible chance I get out, I’ll only be moving to a bigger prison. You don’t get it, Amai… I’ll never be free. I’ll never get away. I was born into this horrible trap, and because of it, I’ll never get out. And yeah, maybe you share the same fate, in a way, but you at least know what it’s like out there.”

“That only makes it worse.” She lowered him to the ground, and moved away to sit on the grass. “Because I know what it’s like, I only want it back more.”

Yukio stared at her. “It must be amazing out there,” he mused. “It must be wonderful to not have any responsibility. I want it so bad…”

“There’s no way,” she said, poking him in the knee. “You can’t live among them. You’re too different.”

He narrowed his eyes at her. “I could pretend to be one of them. They wouldn’t know the difference.”

She glared right back. “No wonder Anzai never listens to you. Nothing you say makes sense.”

“You’ll never be one of them! You’ll always be an Isshin no matter what you try to do. Besides, pretending to be someone you aren’t isn’t much better than trying to forget who you are. You are the most confused guy I’ve ever met.”

“I know exactly what I want,” he insisted. The clouds lifted from in front of the moon, and he realized he was no longer chained to her. “I’m going,” he announced, placing his palms together and squeezing his eyes shut. “Goodbye.”

“Good luck,” he heard her say.

Yukio opened his eyes to see Amai still sitting across from him. Dammit, he was still sitting in the clearing! “Stop talking!” he said louder than he had planned. “You’re getting in my way!”

“Can’t stop thinking about me, eh?” she raised an eyebrow.

“Never mind,” he snapped, pushing himself to his feet and brushing the grass from his robes. “I’ll just walk back!”

He was a few yards into the woods when he heard her say, “Are you sure you know the way?” and stopped dead in his tracks.

“Of course I do,” he said. “It’s me who’s lived here for fifteen years. Not you. Of course I know the way back to my own house.”

“Then you would know that you’re headed in the wrong direction, right?”

Yukio could feel the heat flushing into his cheeks. Not even Master Anzai made him this angry. He spun around. “Look, Amai,” he spat her name out like it had a funny taste. “You don’t know me, you don’t know my master, and you don’t know the first thing about what it’s like to be me, so you can just take your attitude and…”

Her eyes shined at him through the darkness. “And what?”

“And leave me the hell alone!” Yukio cringed at the sound of his own yell. He half expected Master Anzai to be standing behind him, but when he looked behind himself, no one stood there… no one that he could see anyway.

“Go home, Yukio,” Amai said, capturing the control in her voice that Yukio had wanted all along. “But turn to your right before you start walking.”

He didn’t want her to have the last word, but he couldn’t think of anything else to say, so he turned in the direction she had said to go and began walking. Besides, everything he did end up saying only made him look ten times worse than he already felt. He wouldn’t be surprised if Amai never came back to the house.