[MASK OF IDENTITY - ORIGINAL] Yukio was born an Isshin, a powerful being who will one day have the opportunity to become ruler of Morai. The only problem is... he wants nothing to do with it. Can he escape his master and all the pressures around him? Or will he be forced to step in line in a life he doesn't want? 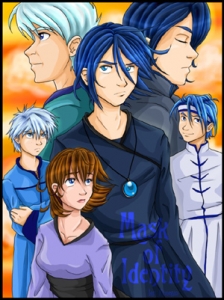 The air was thick and heavy that night as Hana knelt before her only son's futon. She was a young mother, having Yukio when she was only seventeen, and now, at twenty, she had not only lost the love of her young life, but Yukio had lost his father. Hana didn't know which fact hurt her more.

She hadn't told Yukio yet, but she could tell he knew that something was wrong. Hana hadn't been able to stop her tears in his presence. Seeing the little boy's tears had only made her feel worse. The day was long and quiet, and now, at one in the morning, he was finally asleep.

Because Yukio's father was gone, Hana would now spend her life alone. Even though giving Yukio up would be hard, Hana knew she had to do it. She had full confidence in Yukio's abilities and knew that for his sake, she could not afford to be selfish. Isshin were great and noble beings that needed to reach their full potential for the sake of the kingdom… and Hana couldn't be the one to take that away.

A firm hand clamped on her shoulder, and she jumped, turning to look at the intruder. "Anzai!" she exclaimed in a whisper so that she wouldn't wake Yukio. "W-what are you doing here so late?"

"I came as soon as I could," he said as he knelt down beside her, hanging his head. "I'm so sorry, Hana."

She watched his light blue locks hanging over his young face. It had just been decided yesterday; the kingdom had a new ruler, and it was not Anzai. Almost everyone in the kingdom was sure that it would have either been Anzai, or Koto, Yukio's father, that would be chosen as ruler, but after Koto had suddenly died, Anzai lost all of his inspiration, and Ryosei, the third and oldest Isshin of their generation, had been chosen instead. Speculations were now useless. Ryosei was ruler, and nothing could be done to change that fact.

"I should have done something sooner," Anzai sighed. "Four days ago I noticed that he hadn't been acting like himself. He seemed tired and worn out. And I saw the marks on his arms. I didn't know what they were. I didn't think it was anything serious. I just… was so caught up in everything that was going on with the kingdom. I figured that if he wasn't worried, I shouldn't be either. This is my mistake…"

"Stop it!" Hana told him. "This isn't anyone's fault. We didn't know he was sick. He didn't even know he was sick, and even if we knew, there probably wasn't anything that could be done. They told me it was a really rare Isshin disease that no one really knew much about."

"I feel responsible," Anzai muttered as he smoothed out the blanket that rested over Yukio's small body. "I should have said something. I should have told him to go to the kingdom to have himself looked it. I should have brought him there myself!"

Hana grabbed his wrist. "There was nothing anyone can do. I'm sure there were many people who would have helped if they could. Blaming ourselves isn't going to solve anything." She let go of his wrist and wiped a single tear from her cheek. "Look at him," Hana whispered, gazing down at Yukio. "He's finally asleep. How will I explain to him that he'll never see his father again?"

"Tell him the truth," Anzai advised. "Yukio's a strong boy."

"He's… he's not as strong as you think. He cried all day because he could sense it."

"That doesn't mean he isn't strong. It means his senses are at peak… which is one of the reasons why I'm here."

Hana looked up at him, alarmed. She knew all about Koto and Anzai's earlier agreement; Anzai was to be Yukio's master when Yukio had come of age… but that was two years from now.

"I'm worried about Yukio," Anzai went on. "Living without a father for two years before training is not ideal. He needs confidence, and I want to be the one to give it to him."

Hana blinked back her tears. "You're taking him away from me!?" she cried. "When I need him the most!?"

"No," Anzai held up his hands. "I'm not taking him from you. Not yet. I want you to come to my master's house and stay with us until he is five. He'll need you until then." He placed his hands on Hana's shoulders.

He was right, though. Yukio did need a father figure. And what was the harm of starting training a few years early?

"Okay," she gave in, collapsing against his chest as his arms went around her shoulders. "We'll come and stay with you, Anzai."