Sora dreamed of adventure. . . but when she is kidnapped by an assassin, she discovers that she's not quite ready for it! Dumped from her rich life into a world full of thieves, mercenaries, and magic, Sora finds herself hunted by a vengeful sorcerer hot on the assassin's trail. With the help of her magical Cat's Eye necklace, it falls into Sora's hands to save the assassin's life. Now she must journey with an unlikely band of outlaws, discovering the secrets of the Cat's Eye, the mysteries of her past, and just how deep the bonds of friendship can go. 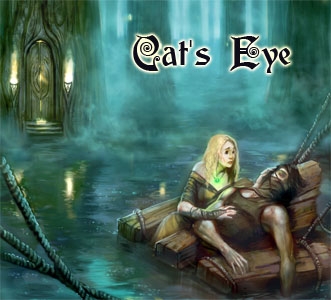 Volcrian looked down at the body, watching the crimson tears seep from the woman's wounds.

His every sense was attuned, his muscles tense, every breath quivering in his lungs along with the sweet smell of death; it permeated the air along with the blood, a thick scent full of spent panic and wasted breath. It was a smell he was used to. Slowly he knelt to the ground, and passed a gentle hand over the woman's head, saying a silent prayer over the body. His pointed ears twitched slightly as he listened to the blood dripping through the floorboards in syncopated rhythm, pooling in the kitchen below where soon the heat from the hearth would dry it. Every nerve in him was aching to reach out and touch the precious water of life, the salty liquid that bore more power than any other magic.

But he wasn't here for a sacrifice.

He was here for vengeance.

"That's the last time you house a murderer," he whispered to the woman's corpse, then his icy eyes flashed to the corner where an equally dead man was lying. The room was a mess; the floor splattered red and the furniture overturned. The two had put up a messy, disorganized fight - but their fate had been inevitable. Volcrian's hand swept to the rough floorboards beneath him, trailing his fingers through a pool of blood. His nostrils flared, and despite himself, his thin tongue whipped out to lick his lips.

The power that he drew from the blood was energizing, elating, a heady rush that made his body sing. With a hollow laugh he flicked his long silver braid over his shoulder and turned from the ruined bedroom, shutting the door neatly behind him. Couldn't have any innocent wanderers coming through and finding the bodies until he was long gone.

I will always follow you, Volcrian thought in grim satisfaction. Yes, he had found the assassin's trail, and dealt justice to those who had helped the murderer. Perhaps they had not been aware of the assassin's past or occupation, but that was of no consequence; it was the code of a Wolfy mage - honor before death; vengeance without mercy.

Volcrian walked out onto the landing and looked down at the sparsely decorated living room. It was a small family he had called upon that evening, middle class and hard-working. They had been eating dinner, talking about the merchant husband's coming voyage overseas. The woman hadn't wanted him to go.

Well, safe to say he wouldn't be going anywhere. Ever.

The Wolfy mage chuckled to himself, unsure of what had brought on this good humor after so many months of brooding. Maybe it was the fact that he had finally picked up the assassin's trail again, or perhaps the life he had drawn from the blood upstairs, or maybe that his belly was full and the future was looking bright for the first time in a long time. Whatever the reason, his steps were light, and a dangerous smile played upon his lips.

Volcrian's smile faded slowly as he descended the stairs and headed for the front door. His dark blue cloak swirled around his lean form in a sudden gust of wind, but the Wolfy paid it no heed. Someone had obviously left the window open.

"Mister?" a small voice asked. Volcrian paused, his hand on the doorknob. Slowly he turned around, his breathing peculiarly light, his eyes flickering around the room. Standing there near the doorway was a small child in a sleeping gown, probably close to four years old, a stuffed dolly in his grasp. Volcrian smiled again, this time indulgently. A child - he loved children.

"Yes, little one?" he asked, stooping down to seem less threatening. He watched in utmost joy as the child took a tentative step towards him.

Volcrian frowned again, and he held out one pale, long-boned hand to the boy. "Your mum is asleep now, little one," he said softly. "But I'll take you somewhere you can get a drink."

The boy looked at him for a long moment, then slowly shuffled his way across the room, still awkward on his feet. Volcrian felt his heart melt slightly at the sight - what a sweet child, so innocent, so young. So pure. Untouched by the cruelty of the world, seeing with unbiased eyes.

Finally the boy was close enough to place his tiny hand in Volcrian's own, and the mage stood up carefully. "It's not far," he murmured, and opened the door into the night. The two stepped out into darkness.

Then the mage took the boy to a water trough, sank him in, and held his head firmly under the water. There would be no one on the streets at this late hour to witness the atrocity. The small child's struggles made Volcrian's heart pound with adrenaline, and as the life was sucked from the poor boy, he could feel it energize his blood. Yes, tonight would make his magic strong, strong enough to finish his quest.

The child stopped moving, and Volcrian stood back, wiping his hands dry on his cloak. He couldn't have the boy speaking of what he had seen, and anyway, it was only justice. Those who helped the Viper deserved to die.

And to Volcrian's mind - the mind of a killer - he had not sinned.

In Plain Sight Aurora and her adopted brother Tobias are more than a little odd, but in the year 2225, where...