Four friends--Eric, Heather, Stephen, and Lila--set out hiking in the Talladega National Forest and became lost to a horrible nightmare that turns all too real.... 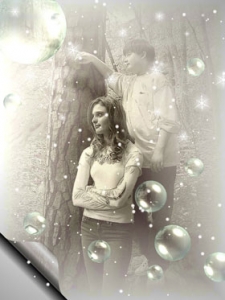 They should have never been where they were--Heather would decide this on a later reflection. She could not tell whether she was awake or not, but they were no longer in the place they had started. Everything seemed to have turned into a dreamy kind of quality around her.

Eric, Stephen, Lila, and she had set out on a hike through the Talladega National Forest as the first rays of the sun broke over the horizon. The air was cool, crisp, and the natural sounds distant, but then it turned dark and cloudy after an hour of traveling. The wind blew and lightning flashed across the sky in jagged spikes.

Their map indicated no swamps in the area, yet they stepped into ankle-deep water as a mist swirled thickly around them. Water seemed to be everywhere. It reminded Heather of being in the Louisiana bayou. Visibility became poor.

She watched as Eric turned to the map and studied it a moment. For him to be confused and lost meant they were all in trouble. Eric had hiked these woods so many times that he knew the layout of the land like the back of his hand.

“Eric...?” Heather's voice quavered, though she tried to control it.

He looked up at her and smiled. “Last week's rain just makes this look like a swampy area. It hasn't had time to drain off.” He turned and pointed in the direction they should go.

Heather understood he lied to her, in an attempt to calm not only her worries but, also those of Lila, his sister.

They moved over logs, stepping carefully from rock to stump to patches of dirt that stuck up out of the shallow waters, ever watchful for snakes or alligators.

The ground shook, startling Heather. She heard Lila cry out, turning just in time to see her friend falling, landing on her rear, creating a splash in the water. Thunder echoed in the distance, and the wind began to whip around them.

Lila got up, more embarrassed than hurt. Stephen stood by her side, helping her up. “I wasn't watching where I was stepping.” Her voice was low and touched with a twinge of panic. Stephen nodded his head in acknowledgement, trying to hold back his laughter.

A strange haunting melody of distant wind chimes mixed slowly into the background noises--Heather heard it and felt a bit perplexed. She glanced at everyone, but none of them seemed to have noticed the song, so she decided to keep quiet. I'm just imagining things, she thought.

After they continued on for a few minutes, a peculiar sensation crept over her. She felt as if she had stepped through a “door” of some kind; one they had not seen--she swore she heard its quiet closure behind her.

Tears welled in her eyes. Please, let it be my imagination.

The rain pelted them as she staggered toward Eric. She fell into his embrace and whispered into his ear, “We've got to turn back before its too late.”

Thunder rumbled in the distance.

Eric pulled back and looked into her eyes. “Heather?” he asked. His voice was soft, but he sounded frightened and worried also.

Heather frowned and could not bring herself to answer. The quality of the air seemed to change, becoming purer and less polluted. She coughed fitfully for a few seconds, pulled a cell phone from the back pocket of her jeans and held it out, but there were no bars. Her throat tightened. She had had a full signal not more than a couple of minutes ago.

She stared back at Eric and held up the phone so that he could see there was no signal. She knew her eyes reflected questions and doubt but hoped he could calm her growing fear.

At first, his eyes mirrored confusion and uncertainty, then they widened in horror. He looked at Lila and Stephen, and then back at Heather. “C'mon,” he shouted, grabbing Heather's wrist and turning her to head back. “We got to get outta here.”

“Something that's not good.” Stephen said it with polite nervousness. Lila did not protest as Stephen took hold of her wrist and pulled her to follow as Eric and Heather passed them. Heather knew Stephen had learned to trust Eric's instincts from past experiences.

They started off slow and cautious as all sounds seemed to cease around them--then an animalistic roar of thunder broke the eerie silence.

The sound came again, much closer this time.

They held their breath, eyes wide, bodies trembling in fear. They drew together, exchanging glances, and understood. Stephen held a finger momentarily to his lips. "Shhhh."

The bellowing cry drew even closer. Something splashed in the grey-green slime of the water; the ground trembled--and then it stopped.

Eric spotted a hiding place for them and motioned everyone to follow quietly. They moved slowly and with care, slipping behind a massive fallen pine. Eric and Heather dropped to their knees, then to all fours to look from beneath the tree. Lila and Stephen held each other looking through the ripped up roots.

The splashing started again, then stopped--the ground shook like miniature earthquakes with each echoing splash. They heard something pulling out of the soggy mud and then stepped back in it causing the tremors in the earth.

Thunder reverberated across the troubled sky.

It was heading their way. Heather could feel the fear gripping her and knew the others felt the same. Sweat broke out on Stephen's brow, and Lila's knees were shaking.

It was a defining moment Heather had not expected; horror and a dreadful fear took hold. She knew the beast that was coming. This was assuredly horrifying!

A loud growl sounded in the distance, too impossible to tell how close or far away it was, but it seemed to Heather as if it was right next to her.

The dense mist hung in the air just thick enough to hide their view of what was approaching.

A horrendous sound rented the air causing Heather to jump. The noise was as loud as the crackling thunder above. The ground shook with the resonance.

Heather put her fingers to her ears trying to dampen the sound.

Out of the shrouded mist stepped a nightmare.

Stephen grabbed Lila and clamped his hand over her mouth to muffle her scream. Heather stole a look at her as Lila's eyes stretched wide in fear. The familiar comfort of safety left her friend's eyes and she could see instantly, Lila felt as she had left one world and stumbled into another.

A tyrannosaurus Rex stepped out into their reality, bent slightly down, bellowing angrily, and looking around with its tail swaying snake-like.

What am I #2 Another "what am I" riddle... see if you can guess... it won't appear what you think...
Parting of Water A fantasy story. Ulan is an imaginary friend, who happens not to be imaginary; him and a million...