-Oban Star Racers- Pairing: Aikka / Molly (Eva) Aikka's little brother keeps chasing away courtesans; his beetle G'dar is no better. Desperate to find a suitable wife for his sun king Lao decrees that an Alien bride is acceptable in the condition she becomes a knight of Nourasia first. -Official FAQ and Fan-Forums used as reference for names and inspiration. 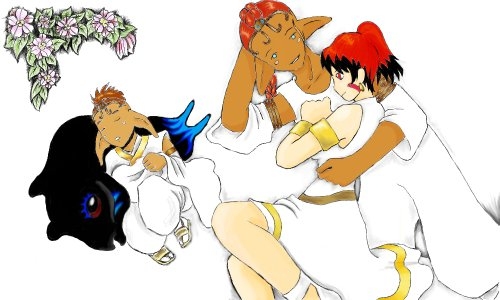 AN/Disclaimer: I do not own Oban Star racer, in fact this would possibly be the first written art I have done in quite some time. Visual typos and small errors' fixed.

“AEEEEEEEEEEEEEEKKKKKKKKKKKKKK!” the screech rang through the halls; everyone in the plaice had instantly turned towards its direction to see the most recent of ‘victims’ running from an enraged War Beetle who’s name was G’dar. Aikka almost fell over as the poor girl was ferociously desperate to escape. She stopped by the prince holding his younger brother ‘captive’ long enough to say “That MONSTER is trying to kill me, my apologies Prince Aikka but I can not marry you so long as that BEAST lives.” Aikka tried to act surprised his younger bother Tokki, on the other hand laughed rather rudely at the noble as if to say ‘I told you so.’

Tokki was around five years old by earth’s standard and did not resemble his older brother Aikka. His ears drooped like his father and he had his mother’s brunet hair, his eyes were probably the only thing that remotely resembles Aikka’s being a off Turquoise in color more blue than green. Tokki had also kept his hair in one single poly-tail that looked similar to a fuzz-ball planted in the back of his head.

“Well, Lady Eelli,” Aikka started “I guess this means the wedding is OFF. I refuse to forfeit my mount for a spoiled wife that I had no hand in spoiling” Furious at the prince’s sincere boast she stormed out of the castle only stopping to bow before king Lao and queen Nori who had been drawn out by the recent screaming and heard well their son’s rather less than well mannered response. It took about a second for Aikka to pull his brother up by collar of his oriental dressings. “you- are the most INSANE little kid I ever meet!”

“I’m older, and related” It had been about 6 maybe 7 years earth time since the great race of oban and Aikka’s mother had a rather surprising announcement for Aikka when he returned. Queen Nori was pregnant; again. Aikka didn’t stick around for the details but was happy for his mother’s recent joy.

Since than Aikka had grown his hair out and preferred holding it in a braid. A scar ran down the left side of his face that was barley noticeable reminders form the war with the crog. He could still remember Evas total shock when she saw him bleeding with a rather gorse looking natural antibacterial covering part of the gash.

For the past years Aikka had been trading a verity of messages to earth telling Eva about many things, while he still called her Molly at times he did so only because it was personal preference. Before they left Oban she had explained everything to him about the reasons for her being there and confessed to using a false name to see if her father deserved to remember her.

Aikka was happy she had made amends with her father; and didn’t hesitate to spread the news of his mother’s surprise. Eva was overjoyed and couldn’t wait to meet Aikka’s little brother, the thought made him want to laugh, she was the only one by the looks of it.

His first ‘Bride’ was quickly chased off when she accidently kicked G’dar and the beetle in a furious hissy fit chased the poor girl outside of the holy city. The second one was disgusted by an infant Tokki who had promptly vomited on her out of no where. The rest of Aikka courtesans wound up with similar fates either G’dar didn’t approve or his little brother found a way to chase off the mean ladies. He was almost worried that his friend would suffer the same fate. The few that did not felt that it would not end well, they left on good terms or of their own accord.

Before Aikka could teach his little bother a lesson his mother spoke up, “Aikka, my beautiful prince, be nice to your younger brother”

“My apologies your majesty,” he bowed slightly “however I don’t want this little brat preventing me from keeping my promise to Molly!”

His mother sighed and put a hand on her son’s shoulder “he’s only a small child I’m sure he will be able to behave himself, RIGHT Tokki?” the younger prince just turned his nose up “Tokki, it is very unbecoming for a future duke ofthe kingdom to act in such a brash and disrespectful manner. Please promise me you will behave if only for Aikka’s earth friend.”

Tokki gave his mother a frustrated look but under the stern glare from king Lao he quickly succumbed and agreed. “Ok, but I’m coming with you when you fly around the kingdom, I have never been outside the city.”

King Lao glared at his youngest son that gives his daddy a rather believable puppy face. “Alright; you may go with Aikka if you behave yourself, but only to the ruby lake, No father. For now your mother has need of your assistance Tokki as I must speak with Aikka.” Tokki cheered and after being dropped on his rear end ran off; the Queen sighed and followed to prevent her youngest son form reeking havoc.

“Aikka I have something you must see” With that King Lao walked down the hall gesturing for his Son to fallow.

Curious Aikka was quick to catch his father and couldn’t resist asking. “Father does this have anything to do with me beginning Molly here?”

“Possibly, as I said before her faith in you is much merit to her character. To spite you being forced to attack her she still risked her life to save you that alone is enough for me to allow her into our holy city.” The king stopped in the sacred gardens where a Large tree stood, he than gestured to one of the limbs. “What do you see there my Eldest son.”

Aikka looked to where his father had gestured and was flabbergasted “that’s a…” there on the limb was a snow white caterpillar with a pale magenta markings on its head, while normally a diamond this one however was a star. “That’sQueenMoth Larva, But they are all extinct aren’t they.”

“Apparently not,” Said the king “but what’s inserting about this one is the star, the seer believe that your Molly as you call her is connected to this moth.

Aikka looked again at the small larva, a QueenMoth was about the size of G’dar when fully grown but its larva was the size of a Earth Raptor and when the Crogs invaded they found a fascination with the glittery wings and Ivory horns. It didn’t take long for the Crogs to hunt the beautiful creator to extinction or so they thought. He knew one thing for sure this was going to be the highlight of Eva’s visit.

Again curiosity got the better of him and he turned to his father, “If you don’t mind me asking what exactly did the seers say about Eva?” it was one of the few times he used her real name and his father knew he was serious.

“They said that the star matched that on her face and that it might be a sign; they were very frank they merely want you to show her to see if it indeed does bond with her. On another topic I have come to a conclusion concerning the Female issues G’dar and your little brother seem to have. I have decided that you may accept an Alien bride However she must become a Knight of our kingdom first, I will not have my son marry some feeble flower who will wilt or some spoiled wretch that will desecrate our sacred kingdom.”

“Yes, I understand” Aikka said with a bow, his father nodded his approval and left his son to ponder the strange caterpillar like creator as it continued to munch on damaged branches and leaves of the great tree. He could see the three lumps on the forehead that would later become the horns of the moth when a bright flash caught his attention.

He covered his eyes till the light dimmed, after he saw who had just arrived he couldn’t resist. “Well, well; what might bring the Mighty Avatar to the holy city of Dol none the less Nourasia?”

“Well nice to see you haven’t lost your touch princy;” Jordan started, he was wearing red and gold robes adorned with the seal of the Avatar of Oban “one more lady running from the castle in a foul mode. With all the young available bachelorettes at your feet I’m surprised you aren’t married already.” The gunner couldn’t help but have a smug grin.

“Pardon my rudeness Great Avatar; but can you cut the CRAP and get to the point!” Jordan was awestruck at Aikka’s rather brash boldness, and became speechless for approximately a minuet before shaking it off and continuing his earlier conversation.

“Well…” he started, “First off that Queen Moth there WAS my fault, it was done intentionally. Now I can’t explain the harsh details or exactly why but I can assure you I’m not trying to play matchmaker here.”

“You are beating around the bush again!” Aikka reminded.

“Ah, well I need you to speak to Eva about becoming a knight.” He finished and waited for Aikka to argue and fuss. To his surprise Aikka was actually shocked.

As soon as the shock passed Aikka glared at Jordan “have you any idea what they will do to her? She’s almost my age if she is even accepted they will work her to the bone just to get her up to speed and even than it will still take years…” Before Aikka could continue Jordan cut him off.

“What do you mean not so lucky?” Aikka retorted.

“You will have to ask Eva about that one, because she would kill me if I told you avatar or no. As for this meeting I fear I have other duties to attend to All I ask is you ask her about it, the Queen Moth is there to ensure she is able to become one if she wills it; Farewell” with that Jordan left in the same bright flashy display he came in causing a spying Tokki to wander right into his older brother.

Aikka looked down and grinned for ear to ear, “Now, you’re screwed!” Toki looked up at Aikka with his mouth gapping and was about to protest when queen Nori came calling. “Say a Word of Jordan’s visit and you will regret it! I will explain to both Eva and our parents.” Aikka scolded His little brother got the hint that this wasn’t some silly little matchmaker game, after all he was old enough to know that the Avatar of Oban was the guardian of the galaxy.

Corrupt Something so pure, how could I corrupt?
What am I #2 Another "what am I" riddle... see if you can guess... it won't appear what you think...