How to make the END? 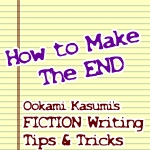 HOW do you make an End?

"When will you make an end?"
- The Pope on the painting of the Sistine Chapel

So what do you do now?

HOW do you make an End?

Fairytales and Myths were my foundational reading, so they became my base model for how a story should finish -- by ending where you began with a solution.

This doesn't mean ending a story in the location it started, or that full irrevocable transformations don't happen, but that the story ties the knot to the Emotional or Karmic place they began: the lost find their way, the wicked are punished, the weak become strong, monsters are faced, emotional hang-ups are dealt with, and problems are solved. What is begun - finishes.

However...
-- Stories aren’t just about characters doing stuff, it’s about character’s dealing with stuff and discovering stuff about themselves. The really good stories, the ones that grab us and stay in our memories the longest, all illustrate normal people problems and issues, and the SOLUTIONS they come across.

No matter how fantastic the setting or characters are, stories are still about people being people dealing with people stuff. It isn’t what they Do, it’s How they did it, and what they discovered  about themselves on the way.

It sounds perfectly simple, and it can be, however I despise stories I can guess the ending to, so naturally, I refuse to write them that way. (Insert evil snicker.) I prefer to make my stories a bit more unpredictable.

The Wrong direction is the Right direction!

I prefer to write stories that throw the reader completely off the obvious path, straight through the center of the village, and force them into the deep dark woods. I deliberately make every straightforward solution unbelievably problematic!

Characters reveal motives that change how their base characters are perceived.

Random events and objects are revealed to have unexpected connections.

What was accepted as fact is revealed to be something else entirely.

And in the process of dealing with all that...