When he realizes that he is a werewolf he is at loss at what comes next. 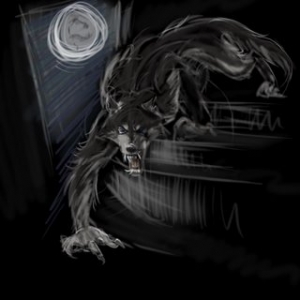 His fur glistened in the moonlight, shining, shining through the guzzled forest limbs. The canopy which shaded the forest floor with spots of moonlight that danced upon the dried leaves and brittle grass. He sat there thinking about his state, about what was to become of him. Sadness filled his heart as he howled to the pitch black of the star littered sky. He looked up to see the phenomenon of a star streaming across the sky familiar to the stray tear that dribbled down his face. The thick white fur of his enormous hide shimmered when the faint glare hit it just right.

His size big enough to scare anything that would be utterly normal. The bulk of his head, the sad stare of his eyes hazed in a light green, shrouded with a light tint of turquoise mist. He walked in a circle twice before laying down resting his head on his paw. His mind tried to comprehend the past happenings that put him in such a state. Why was he like this? What purpose did he possibly serve now? How would he keep such a secret? The blank of his mind never filled for the confusion was too great.

He couldn’t fit things in this mind as he had in the previous one; it was different, more simple. Even though he could perfectly understand what went on around him it was still in a different format, a foreign set of mind. He pondered this over as he felt a new sheen white snow drift above him, melting on his fur. It struck him interest as he gazed upward watching the white come down. At least everything else was still normal, the world kept at function event though he stood frozen. But this sudden loss was dispersing as he felt the presence of a foreign force. The aegis of his mind was being purged somehow. He could feel the pressure of an outside force looking for ways to enter his consciousness, to invade his thoughts. Whatever it was it didn’t get far. The iron hold barred any possible entryway, the pesky sense bothered him, irritated him. The feeling of perpetual rage welled up in the pit of his stomach.

He had never felt so sure of something like this, the presence of a physical force was now here, and he could feel it, taste it. The sent of a hunter caught his nose, along with the smell of pure silver metal. His fur raised, ivory teeth barred, ebony death coveted the entire area. His patience ran short; he heard the faint click of the pistol. Rage, pure rage he felt as he flexed the muscles in his legs and shoulders. He’s had it; the gun didn’t even start to fire when the wolf vanished the flash of forest life speed through his eyes as he adjusted to the acceleration. The hunter was caught.

He had him, the hunter sill holding out the gun pointing in the previous direction but was now shattered from the impact when he was engulfed in the wolf’s teeth. All was over in a matter of seconds; the werewolf was now complete and whole.

RD Mountain Child A young child runs away from being sealed inside a shrine and becomes sicker and sicker the...
Zelda: the Last Generation What might have happened before Ocarina of Time. This is my rendition of the story. It's...