That's One Way to get a Kiss - Chapter 1

That's One Way to get a Kiss

Ishida has been invited to a Christmas party at the Kurosaki residence but is hesitant to go in, what will Ichigo do to get him inside? 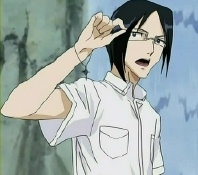 [I do not own the characters of Bleach.  This is a non-profit fan work.]

"I knew this was a bad idea," Ishida whispered to himself as he tried to make himself warmer.

The glasses wearing teen was standing outside of the Kurosaki residence in the middle of the evening. Inside the building it was warm and the sound of music and laughing could be heard. Even without being too close to the door Uryuu could smell all the delicious food, and something he was sure Inoue had made. The present he was holding had gotten crushed in his attempt to not slip on a bad patch of ice a block away not to mention he was almost three hours late.

"I don't know why he invited me in the first place," Ishida pushed at his glasses with his gloved fingers.

Earlier that week Ishida had been trying to work when a brightly colored envelope was thrust under his nose:

"Hey, Ishida, thought I had missed you," Kurosaki smiled. It was his hand that held the mentioned envelope.

"If you're trying to blind me you'll need brighter paper," Ishida tried to go back to work.

"Oh not this again," Ichigo groaned. He snatched Ishida's pencil from his hand and when the other tried to retrieve it he quickly put the invite into the other's grasp, "there, now you're actually invited."

"What are you talking about?" Ishida scowled until his writing utensil was returned. He looked at the colored paper again and realized it was some sort of party invitation.

"You know, for being so smart you can be damn slow some days," Ichigo grinned as he grabbed his bag and started to leave the classroom.

Uryuu watched him go then looked again to what was in his hand. Upon opening it he found he had been correct in guessing that it was an invitation, an invitation to a Christmas party, to be exact. It was right after the start of break before most would be going away with their families and it was at Ichigo's place. He sighed as he stuffed the card and envelope into his bag, "of all the silly notions, inviting me to a party."

The rest of the week had been spent giving non-committal answers to Kurosaki's incessant pestering until finally the orange head had stated, loudly, "look, Ishida, just come to the party. It won't kill you to spend time outside your apartment for a change."

So now Ishida was outside his apartment, so outside he was at Ichigo's house though missing the important implied-ness of the invite to go in the house.

After lingering outside of the house for a good twenty minutes Ishida decided it was a mistake to come and turned to walk home, only he walked straight into Kurosaki's chest.

"You know most people who come to a party don't watch from the outside, or did they not teach that step in your cram schools?" Kurosaki smiled.

"You have a nasty habit of sneaking up on people," Uryuu tried to gather himself and hide the smooshed present.

Ichigo laughed, "Wow, I thought you were the one always complaining my energy was like hitting you with a truck. A truck can sneak up on people?"

Uryuu sighed, "I apologize for darkening your doorstep for so long, I'll be going now." His arm was grabbed before he could move again, "Kurosaki, let me go."

"Why won't you come in, Uryuu?" Ichigo whispered.

Ishida blinked, "You know why, Kurosaki, that's not my kind of thing."

"It's not your kind of thing because you won't let it be," Ichigo looked down into Ishida's eyes.

"You're being cryptic again," Ishida stated.

"Damn it, Ishida, come inside, please," Ichigo said louder with a tug to the other teen's arm.

"Why? So I can sit there like a lump avoiding Keigo's stupid comments and Inoue's attempts to get me into the party? No thank you, Kurosaki now let me go," Ishida yanked his hand free.

"Fine," Ichigo took something and stuffed it into Ishida's pocket then headed back inside.

Ishida hadn't meant to be quite so harsh. He couldn't say anything as he watched Kurosaki walk away. After a moment he reached to get what had been put in his pocket. It was a small present the tag read: 'To Uryuu From Ichigo I hope it's the right one'.

The dark haired teen blinked then unwrapped the gift. Inside was a brand new watch, his had broken about a month ago and he kept forgetting to go get another. The lack of his timepiece had been making the master archer silently crazy. It was actually the right size for his thinner wrist too.

Knowing if he went home he'd feel bad Ishida headed around to the back door. Before he could knock it was pulled open by Ichigo.

"Guess I got the right one," Ichigo smiled.

"You did," Ishida admitted. The house smelled even better from the doorway.

"It would be the polite thing to do," Ishida started to step in only he didn't get very far. He went to say something about that only Kurosaki's smile, and where he was pointing, stopped him. His eyes slowly lifted to view red berries and deep green leaves. He looked back at Ichigo, shock plain on his face only to have the other already leaning forward.

Ishida couldn't help himself but step into it.

Ichigo held the kiss for a long minute with his eyes closed.

Uryuu held the already crunched gift tighter, not pulling back until Ichigo did.

"There, now the party's much better," Kurosaki, whispered.

Ishida was blushing and unable to look away, "you did all of that on purpose, just to kiss me?"

"Not entirely sure what all you're referring to but taunting you to come inside, yeah, that was to kiss you," Ichigo admitted.

"You never cease to confuse me, Ichigo," Ishida smiled.

Ichigo beamed, "well, then I guess I'll keep making your life interesting." He pulled Ishida gently inside then shut the door.