Assignments and exercises for a class I never thought I'd end up hating. 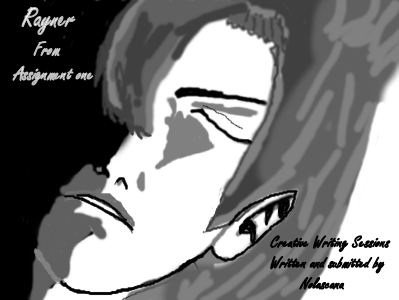 We were given four starter sentences and as part of the class we were told to choose one and make a six sentence story.

For fun i created an additional two, i might add to them eventually, the prompts are in itallic.

Tuesday dawned like any other day, but nothing could ever be the same for the simple rickshaw runner. He had always believed in luck and one’s own hard work, until he saw it fall from the sky. It, was an angel that had forgotten its own name while falling. The rickshaw man followed the paths he knew to get to where he had seen the angel fall, he knew it to be an angel for it had appeared from nowhere. He helped the winged one into the back of the seated cart he pulled and after making sure the angel was comfortable he took him to his home to rest. From that Tuesday the man was burdened as well as blessed.

Robert staggered over to the boot of the car with his keys, fumbling for the correct one, shaking in both fear and disbelief. He had run into something while he was driving and promptly stopped his car. Robert could see a mass in the road and had gone to see the eagle he thought had collided with him changing to something else, a human no less! He draped the blanket from his boot over the shoulders of the red haired child carefully. When asking what was happening he got the short, smiling response: “I’m a Phoenix!”

She pointed to a sign that said ‘No pets or animals’ on the wall by the doorway of the Starcross Inn Rayner looked down to where his hooves pawed at the floor before sighing and walking away to find somewhere else to stay. Being one of the few centaurs left in existence it was hard for him to be respected by anyone. It had been a long time since the humans had destroyed his home, his land, and most of his kin. Something behind the ‘taur whistled and called out to him “I have a stable with empty space and some blankets if you want ‘em!” For the first time in months Rayner had occasion to smile and trust a human, the offer wasn’t too good to be true, for this night at least he had a solid roof over his head.

Forget Me Not Unravel the mysteries of the world around you, as you seek to find the pieces of a fragmented mind.
Love Or Pity This poem is for those who question whether the person they love is either pity or real love.......