Is your character TOO Special? - Chapter 1

Home » Writing » Is your character TOO Special? » Chapter 1

Is your character TOO Special?

Are you indulging in a few too many "special traits"? Is your story really an excuse to show off your Super Special Character? Are you committing a MARY-SUE/GARY STU? --> Dead give-away: Your favorite character is YOU only BETTER! 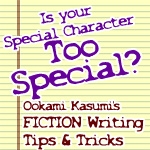 Is your Special Character
Too Special?

Are you indulging in a few too many "special traits"? Is your story really an excuse to show off your Super Special Character? Are you committing a MARY-SUE/GARY STU?

--> Dead give-away: Your favorite character is YOU only BETTER!

Who is Mary Sue/Gary Stu?

According to Aestheticism.com:
~~~~~~~~~~~~~~~~~~~~
“The Mary Sue, as someone said, is the highest form of fannish devotion to a series. You like it so much you want to come play in it yourself. Most fan writers are content to do this by sneaking in under cover of one of the canon characters.

While not every "super-special!!!" character is actually a Mary-Sue/Gary Stu, they fall under the same rules because when one makes a "larger than life" character, they tend to be unbalanced and quite frankly, no fun to read. Think Superman without Kryptonite. When you have a character that never loses, you might as well write:

This is also known as Godmoding.

Think: How many ‘special’ traits does your pet character have? Let’s find out!


Despite all this, God-mode Mary Sue characters AREN’T necessarily a bad thing. In fact, Mary Sue is an excellent way for a beginning writer to experiment with story-telling. In fact, it’s the most common way a writer begins writing anything at all.

God-mode, Mary Sue/Gary Stu (especially under the thin veneer of a favorite Manga character) only becomes a problem when one posts them on the Fan-Fiction sites where Readers can see them and Flame them for being too unbelievably perfect to identify with and/or too Out of Character (OOC).


So what do you do to keep your characters from falling into the black hole of Mary Sue-ism?

Exercise your experience - but don’t fall in!
~~~~~~~~~~~~~~~~~~~~
A Story is nothing without good strong characters, but if you can’t use yourself, how do you write about the feelings of someone else? You Empathize -- you recall how you felt under similar circumstances -- but you don’t BECOME that character.
Examples…

The other guy, David turns to Michael and invites him to come along.

Michel’s motorcycle is only a dirt bike. There’s no way in hell his bike can surpass David’s.


Underworld:
~~~~~~~~~~~~~~~~~~~~
Michael has had one hell of a day. There was a shooting at the train station, and crap at his hospital job, and then when he goes home, he finds a really beautiful and incredibly strong girl who immediately tries to strangle him in his apartment.

Moments later, he's running for his life from things galloping after him on the walls and ceiling. He escapes into an elevator and the door closes. Then it opens.

A guy he's never seen before in his life smiles and says: "Hello Michael." Suddenly, bullets rip into the guy right in front of him. The guy falls forward onto Michel and bites him.

Out of nowhere, the strong girl comes back and drags the weird guy off of him.

Changing takes suffering. Both the hero and the villain should suffer emotionally and physically to allow for their personal changes. Think about how hard it is for YOU to change your mind about something important to you. That's the level of suffering you need.

If this seems a little formulaic, remember, it’s not what you HAVE it’s what you DO with it.

Miss Congeniality -- Romantic Comedy
~~~~~~~~~~~~~~~~~~~~
• A Protagonist with character traits designed to work AGAINST the plot.
~~~~~~~~~~~~~~~~~~~~
Gracie Hart is a wisecracking, serious-minded, and somewhat clumsy FBI agent with a soft spot for helping those in need. Completely focused on her job, she's never worn dresses or silly girl stuff. Her FBI superiors want her to not only enter, but also win a beauty pageant.

• A sidekick to add complications and make matters worse.
~~~~~~~~~~~~~~~~~~~~
A love interest that thinks she should just keep her head down and follow orders like a good little agent.
A personal beauty trainer that will make her shine, in spite of herself.

• A Villain that the hero absolutely Cannot beat when the hero first enters the fray.
~~~~~~~~~~~~~~~~~~~~
The intimidating and influential owner of the pageant.

• A sidekick to add complications and make matters worse.
~~~~~~~~~~~~~~~~~~~~
Both Morpheus and Trinity believe in him, to the point that they keep risking their lives so he has to keep saving them.

• A Villain that the hero absolutely Cannot beat when the hero first enters the fray.
~~~~~~~~~~~~~~~~~~~~
The Matrix is a sentient mega-verse. Mr. Smith is a replicating Virus. Both are bound and determined to keep all of humanity deaf, dumb, and blind to what’s being done to them.


In Conclusion…
~~~~~~~~~~~~~~~~~~~~
Make your Characters part of your story, not the Excuse for your story. Give them pain, give them heartache, and make them face their fears. Anything less cheats the reader out of some good healthy angst!
~~~~~~~~~~~~~~~~~
DISCLAIMER: As with all advice, take what you can use and throw out the rest. As a multi-published author, I have been taught some fairly rigid rules on what is publishable and what is not. If my rather straight-laced (and occasionally snotty,) advice does not suit your creative style, by all means, IGNORE IT.

Lost I dunno...
Artwork for CafePress This tutorial covers the basics for preparing your artwork for use in the PaperDemon Cafe Press...