In order to make my stories crystal clear in my readersâ€™ imaginations, I write in precise Chronological Order, the order events actually happen, PLUS in the order that the eye (camera) sees it. HOWEVER...! Writing in chronological order means that your sentence structure can't always conform to the 'proper grammar' rules. This is because the basic composition of an Essay (what they teach you to write in class) , isn't anything like the composition of a Story. 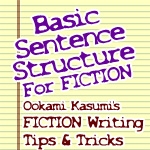 Everything I ever learned about writing Fiction DIDN’T come from school; not even college. In fact, the way one writes fiction is almost the complete opposite of everything I learned in school about writing.

In order to make my stories crystal clear in my readers' imaginations, I write in precise Chronological Order, the order events actually happen, PLUS in the order that the eye (camera) sees it. Yes, they are two different things.

Case in point, when describing a character, I describe them top to bottom, in the order that the eye notices them. Face, hair, upper body, arms, hands, then lower body, legs, feet, then over all impression. <-- In that order, UNLESS a body part is doing an action, such as a hand (grasping, slapping, twiddling a pencil, etc…) or the feet, (walking, jumping, kicking, running, etc…) When someone is doing an action, that action ALWAYS comes first.

Try it yourself. Go to the mall, or any other place where people gather, and LOOK at the people around you. Pay close attention to what you notice first then next. Next, watch a movie and look at how the camera pans across someone.

He flipped up his middle finger, narrowed his green eyes, and tightened his full mouth. His red hair spilled in messy finger-combed spikes across his brow and down his back. His shoulders were stiff with tension under his dirty white t-shirt. He stood with his booted feet apart and his jean-clan knees slightly bent as though braced for a punch.

-- Writing in chronological order means that your sentence structure can't always conform to the 'proper grammar' rules. This is because the basic composition of an Essay (what they teach you to write in class) , isn't anything like the composition of a Story.

1. Tell them what you're going to tell them.

3. Tell them why you told them.

Essays are NOT written in Chronological order, they're written in order of Impact.

2. These are all the reasons why it's important.

3. This is why it's important to You.

One of the greatest enemies of fiction that one is actually taught in school is the use of the word: “as.”

In school, they teach you that ‘as’ is a word used to connect fragments of sentences together, rather in the same way as you would use “and.” Unfortunately, “as” doesn’t quite work the same way as an “and” in fiction.

-- “As” means, “things that happened simultaneously.”

In Fiction NOTHING is truly simultaneous because the eye READS only one thing at a time. The only things that can actually be counted as simultaneous in written fiction are groups of things.

All the soldiers marched.

I'm NOT saying that simultaneous events CAN'T be written. I’m saying that using "as" is not the way to do it. Any group of events listed in one sentence are generally perceived as happening all at the same time -- until you get to the "and". However, they should still be listed in the order in which they happened so as to make the reader's VISION of the whole event crystal clear.

As far as I'm concerned, the only place an “as” belongs is at the BEGINNING of a sentence.

As all the soldiers marched while the drums and fifes played.

Where “As” goes WRONG…

I consider “as” a red flag word. A word that marks that something has gone terribly wrong in your sentence structure.

-- In fiction, the word “as” usually marks where a sentence has gone out of Chronological Order.

The vampire scratched his head thoughtfully as he crouched over his victim.

1. The vampire crouched over his victim.

2. He scratched his head thoughtfully.

The chronological way to write this would be:

The vampire crouched over his victim AND scratched his head thoughtfully.

Why does this matter?

A sentence Out of Chronological Order means that the reader has to Stop Reading to reset their mental movie of your story. That’s bad, very, very, BAD. Do this enough times and your reader will stop reading your story to go find something easier to imagine. In fact, some readers will not only drop your story, never to read it again, they’ll avoid anything else you write.

How to Grammar Check for “as”:

Do a Search/Replace substituting “as” for “and,” then go back and read through your entire work. If “and” doesn’t fit right in your sentence, then it’s most likely Out of Chronological Order.

The werewolf flattened his ears angrily as he faced the hunter.

The werewolf flattened his ears angrily and he faced the hunter.

“And” doesn’t quite work there, does it? Why not? Because the werewolf didn’t flatten his ears before he faced the hunter.

1. The werewolf faced the hunter.

2. He flattened his ears.

The werewolf faced the hunter and he angrily flattened his ears.

The werewolf faced the hunter and angrily flattened his ears.

See what I mean?

Rule of Thumb on the use of “AND”:

One “and” per sentence.

If you need a second “and,” pull out the first one and use a comma, or use “then.”

The werewolf faced the hunter, angrily flattened his ears, and growled.

The werewolf faced the hunter, angrily flattened his ears, then growled.

If you need three “ands,” replace all but the last with commas.

The werewolf faced the hunter, angrily flattened his ears, growled, and lunged.

If you need more than three “ands,” then it’s time to cut that sentence into two separate sentences.

The werewolf faced the hunter, angrily flattened his ears, and growled. He lunged and snapped.

-- Fiction should ALWAYS be written in Chronological Order, even when the grammar rules say that you don’t have to for your readers' Visual CLARITY. Believe me, they'll appreciate it!

~~~~~~~~~~~~~~~~~
DISCLAIMER: As with all advice, take what you can use and throw out the rest. As a multi-published author, I have been taught some fairly rigid rules on what is publishable and what is not. If my rather straight-laced (and occasionally snotty,) advice does not suit your creative style, by all means, IGNORE IT.

Gale's Gift There’s nothing Morghram hates more than storms, but when he sees a person trapped in the sea...
A D&D Poem Something I felt like doing. This is my first poem so hope you all enjoy. For those of you who...