To thoroughly understand what makes your characters tick, use this character sheet for Each of your three main characters. This method is particularly useful when you intend to write something the size of a novel. 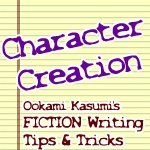 Translation: You could tell the whole story with ONLY these Three Characters; perhaps not with any real detail, but you could still do the entire basic plotline.

I'm sure you're familiar with the names Hero & Villain or Antagonist & Protagonist already. Those are pretty darn standard. However, always there, though seldom named is a Third character, the Ally -- the Companion to the Hero or Villain

In Romances, this character is the Love Interest. In modern mainstream fiction, and tons of movies, this is the trouble-inducing Best Friend or Interfering Relative, (often a younger sibling). In comic books, they’re the Side-kick. In traditional fiction, they were known as the Victim.

In ALL cases, the Ally’s fate turns the plot at the Climax, usually by needing to be rescued, and more often than not, the Ally is also the story’s narrator, or the Viewpoint Character.

Okay… So, if you already have a Main Character and a Villain, all you need is an Ally, a trouble-maker to stir the pot…err, PLOT.

Here’s the tricky part. When dealing with a story with a large cast, the three characters swap out, they change places at Every Scene Change ~ BUT ~ each scene still only contains, three main characters.

When these three Hellsing characters occupy a scene TOGETHER, though it’s rare, those are the parts they play. However, when Alucard & Seras Victoria are in a scene together, Alucard plays the Protagonist and Seras the Ally (and narrator of the scene,) with whatever third character being the Antagonist. On the flip-side, when Sir Integra Hellsing and Alucard share a scene, Sir Integra plays the Protagonist and Alucard the Ally. Whatever third character shows up usually plays the Antagonist.

Confusing isn’t it? It gets even more so when the cast is as large as that of Naruto , or Lord of the Rings.

The Larger the Cast, the Longer the Story.

Why is this so important? The more people you involve in your story, the more plot-threads you’ll need to tie up at the end. In other words, every time you switch your triad of characters, you are in effect creating a whole new story that MUST be concluded IN ADDITION to your lead characters’ story.

This means that if you only plan to write a short story, you need to keep the story focused on your main three characters. That doesn’t mean you can’t have other characters, it just means that those extra characters shouldn’t contribute to the story as anything more than window-dressing or props.

Once you decide on your Three Main Characters, how do you make them work together? By figuring out what makes each character tick…

The first question, “Who am I?” should clue you in as to what each characters’ greatest weakness is. The second question, “What do I want?” gives you their motives. As for the third question, by combining the answers to “…the worst thing,” this should give you the big reversal, the story’s darkest moment at the center of the story.

2 - I am on a holy crusade to destroy the unholy monsters that prey on humans.

3 - Give me control of a creature more monstrous than any monster out there -- and make me like him as a person.

1 - I’m a Vampire that preys on other vampires.

3 - Make me so monstrously insane I have to voluntarily choose to be enslaved by one who can control me.

3 - Have me discover that the vampire that made me is dangerously insane.

This method works especially well when you have three excellent characters but you’re not quite sure what kind of story you want to write for them.

To thoroughly understand what makes your characters tick, use this character sheet for Each of your three main characters. This method is particularly useful when you intend to write something the size of a novel.

• Ego flaw: “Makes me great yet could destroy me…”

• Internal Conflict: “I am troubled by…”

• External Conflict: “I am thwarted by…”

• Ordeal/Reversal: “Last thing I ever want to happen…?”

• Epiphany: “I will discover…”

You’ll notice that I left out some of the more obvious things found in most character sheets: jobs, skills, physical descriptions, and other technical data. This was done deliberately. By using a character sheet that maps out only the Heart and Mind of your character, you’re free to use the SAME character in other stories under other names.

The fastest way to make characters is by starting with a familiar character, such as a movie character or actor, and warping them to suit your needs. Both of these methods should prove handy to do just that whether you are working with known characters for a fan-fiction or creating new ones for something entirely original.

~~~~~~~~~~~~~~~
DISCLAIMER: As with all advice, take what you can use and throw out the rest. As a multi-published author, I have been taught some fairly rigid rules on what is publishable and what is not. If my rather straight-laced (and occasionally snotty,) advice does not suit your creative style, by all means, IGNORE IT.

[Stryx] Scavenging | Noctia 1
A dreamer's lie Well, this is pretty self explanatory. I think you guys can figure it out. I haven’t submitted...