Team Toguro celebrates Christmas, each in his own way. 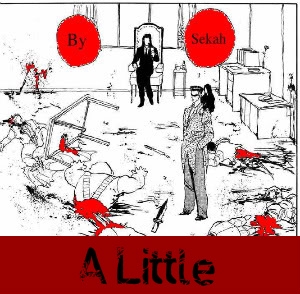 It was cold outside—frostbitten and achingly clear—with a soft filigree of snow drifting lazily through the air, clinging to the eyelashes of a human guard who was struggling to patrol through the great drifts, his hand fondling his icy gun and his shoulders shuddering. Toguro regretfully acknowledged that he couldn’t experience it, though the guard had just tripped with a curse and bent over to blow on his hands, a puff of vapor clouding from his mouth and dissipating idly in the chill air.

Toguro grunted, feeling only the generic warmth he always felt—that in spite of the fact that the glass windowpanes arching above him should have sucked out all of this area’s heat. His skin was so calloused he could barely sense the temperature of the coffee he cradled in his massive hand, keeping it well away from the pages of the book he was fiddling with, trying to keep his broad fingers out of the way of the type.

Another sip of the bitter drink rolled around his tongue, and he considered pouring a bit on one of the human guards, asking him if it were hot or not. He smiled, amused, and then cocked his head and spent a minute waiting patiently for the door of the study to finally open, and reveal the approaching intruder.

“Your man Karasu’s tracking blood around my mansion. I would appreciate an order to be a bit more neat with his murders.” The unspoken, that Sakyo would have given the order himself but for the loss of face if Karasu resisted, was never vocalized.

Toguro looked ruefully at his book, and then put it down, not showing his displeasure any more strongly than that. “I’ll deal with him,” he muttered, taking another sip of the coffee and getting up from his armchair with a grunt.

Sakyo stood, that titillated smile crossing his handsome face and making the skin around his scar grow white, and said, “In a nostalgic mood, Toguro?”

Toguro was putting on his glasses. “It is Christmas, after all, Mr. Sakyo.” Coming from anyone else, it would’ve been playful; with Toguro the grim joke in his voice was difficult for Sakyo to discern. He even wondered for a moment if he had been joking.

“Is it? I was not aware. Perhaps I should give some of our new demon slaves a day of clemency.”

Toguro quirked his lips, the action looking wrong on his angular face, and bent his brows in mirth. “Brother would be disappointed.”

“At the very least we should brand them with wreathes.”

Toguro grunted, and asked calmly, “Where did you last see Karasu?”

“Scaring our resident whores, I believe. Normally I wouldn’t mind, but he’s carrying around the body parts of that boy he killed, and it’s been an awful mess. Blood all over the cushions.”

“I’ll make him bury the body and then take him out training. That should take his mind off it.” Toguro put down his mug and made for the door, boots creaking against the wood floorboards.

“I’ll organize a bonus of some sort,” Sakyo murmured, and realized with curiosity that his earlier question was never satisfactorily answered. Was Toguro feeling nostalgic? For the thousandth time since they’d met, Sakyo turned his keen mind to the puzzle of Toguro, even as the man shifted and sighed, stoically shutting the door behind him. Sakyo had never had a subordinate so predictably unpredictable, and even now, years later, he still couldn’t find what made the giant tic.

Oh well, he thought, walking over to see what Toguro had been reading. It matters only a little.