Professionally published Series books and Serial episodes, whether it's a TV program, a set of novels, or a comic book series are EACH written as whole stories because a whole story is more likely to catch and hold the attention of new readers or viewers than a random hunk of story from the middle of a longer work. 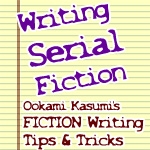 Writing Serial & Series Fiction ~ Not just another Novel idea ~
Please note; this is how the Professionals do it. Those of you who are Not professional are free to write (and post) as you please.

I hear it time and time again: "If the story is too big, why don't you just cut it up into a Series or Serial?"

You can't just cut a novel-type Story in half to make a series, or use the chapters to serialize it. A true serial "episode" is its own Complete Story within a larger story. A Serial tale is NOT a chapter with book cover – and neither are Series books.

Why? To interest New Readers.

Professionally published Series books and Serial episodes, whether it's a TV program, a set of novels, or a comic book series are EACH written as whole stories because a whole story is more likely to catch and hold the attention of new readers or viewers than a random hunk of story from the middle of a longer work.

The difference between a Story and a Serial is:
Plot Structure

Some authors have more than three main characters, (Proponent, Ally, Antagonist) and strong subplots for secondary characters in addition to the main characters, but their stories are HUGE. (In the case of Fan-fiction, those stories rarely end because the writer loses interest or gets lost before they can get to the end.)

Stephen King typically has one over-all plotline and separate plot/character arcs for at least three characters in each of his books, which amounts to a whole story for each character. He simply alternates between characters at chapter breaks. This of course, increases the size of the story. Instead of one main story, Mr. King has three, or more, smaller stories all connected by the same events (plot arc) under one cover. By the way, Mr. King used to write Serials!

A Comic book series, a TV series, and an Anime series are traditionally divided by progressive Seasons with 12 to 24 episodes per (seasonal) plotline. Each new issue or episode opens with an intro to all the main characters (usually done via the credits,) then focuses briefly on that episode's protagonist in the opening sequence right before the commercial.

The story then dives into the action, which is either a piece of one of the subplots (with hints at the over-all plot,) or a piece of the overall plot (with hints at one - or more - of the sub-plots). Ideally, each character in a serial including the villain, has their own subplot story going on during the main plot. Even so, each individual episode is an entire story all by itself that dovetails into every other episodic plot arc making a single cohesive whole.

The trick to doing lots of serial episodes is by switching the focus of an episode to another main character, so that each has a chance to tell their own story -- one whole episode focusing on that one character.

Buffy the Vampire Slayer had PLENTY of characters to play with, and then some. Buffy had her Watcher, Angel, Willow and Xander, just to scratch the surface. Spike, the main villain, had Drusilla or some other support vampire.

In the old 1960's Batman TV series, Batman occasionally showed Robin's, Alfred's, Commissioner Gorden's and Batgirl's point of view. Batman’s weekly villain also got at least one whole episode too, (usually the episode that began an arc.) In addition, the Villain always had at least one close partner that eventually betrayed them.

The cast of Naruto is GIGANTIC. Typical of most manga series, that series is cut into even smaller pieces with one chapter spanning 3 to 48 episodes per Chapter plus 3 to 24 Chapters per Arc.

With 4 to 6 major point-of-view characters including the villain, plus the viewpoint of one or two of the support characters that are seen fairly regularly -- that's a LOT of Story.

The longer a series runs, the more ‘story’ is needed, so more characters are added.

A typical TV series starts out with 4 to 6 major good guys plus the main character, and 1 major bad guy with other minor good-guys and bad-guys wandering through the main plotline. The last episode in the season brings all the main characters together for one big, final climactic scene. A few characters are lost in the finale and the next season starts with those characters replaced by new characters.

Each successive season typically adds more characters plus changing the situations of some of the old ones.

Why? Because they need more story to keep the serial going.

The Serial and the Series share most of the same characteristics, with one major difference – PLOT CONCLUSION.

A Series completes ALL the subplots featured in that one book. A Serial does not. A Serial completes ONE major plotline, while hinting at others.

"FarScape" had a very thin master plot arc with strong seasonal plot arcs made up of episodes that added up to one Seasonal Story. "FarScape" was a series of serials.

The original "Star Trek" TV series did not have an over-all plot arc of any kind, merely episodes that could be viewed in any random order. "Star Trek" was a true series.

"Star Trek-Next Generation" had thin seasonal plot arcs with the occasional story that was more than one episode long. "ST-Next Gen" was a series with a few serialized episodes.

In order to create a serialized novel, the story must be crafted to be a serial from the beginning.

A Novel-type Story
- One whole story with one cast of characters.

A Series
- A group of complete full-length stand-alone stories (novels) all in the same universe with one (related or unrelated) cast of characters per story.

A Serial
- Lots of stories all related to each other that create one big (ongoing) story. A serial normally has one main cast of characters, though the cast tends to grow as the serial continues from season to season. A long-running serial is often divided into "seasonal" plot arcs.


In Conclusion…
~~~~~~~~~~~~~~
The plot arc for a single title novel just isn't complex enough to be cut into a serial without major work. An ordinary novel just doesn’t have what it takes, plot-wise, to live up to a serial’s standards.

Keep in mind this is how the Professionals do it. Those of you who are Not professional are free to write (and post) as you please.

~~~~~~~~~~~
DISCLAIMER: As with all advice, take what you can use and throw out the rest. As a multi-published author, I have been taught some fairly rigid rules on what is publishable and what is not. If my rather straight-laced (and occasionally snotty,) advice does not suit your creative style, by all means, IGNORE IT.

Tears of Blood What if Gohan met a Half-Demon and fell in love with her before high school? What if an old...
How to Calm a Friend If your friend is having a nervous breakdown, then this will surely calm them down quickly.